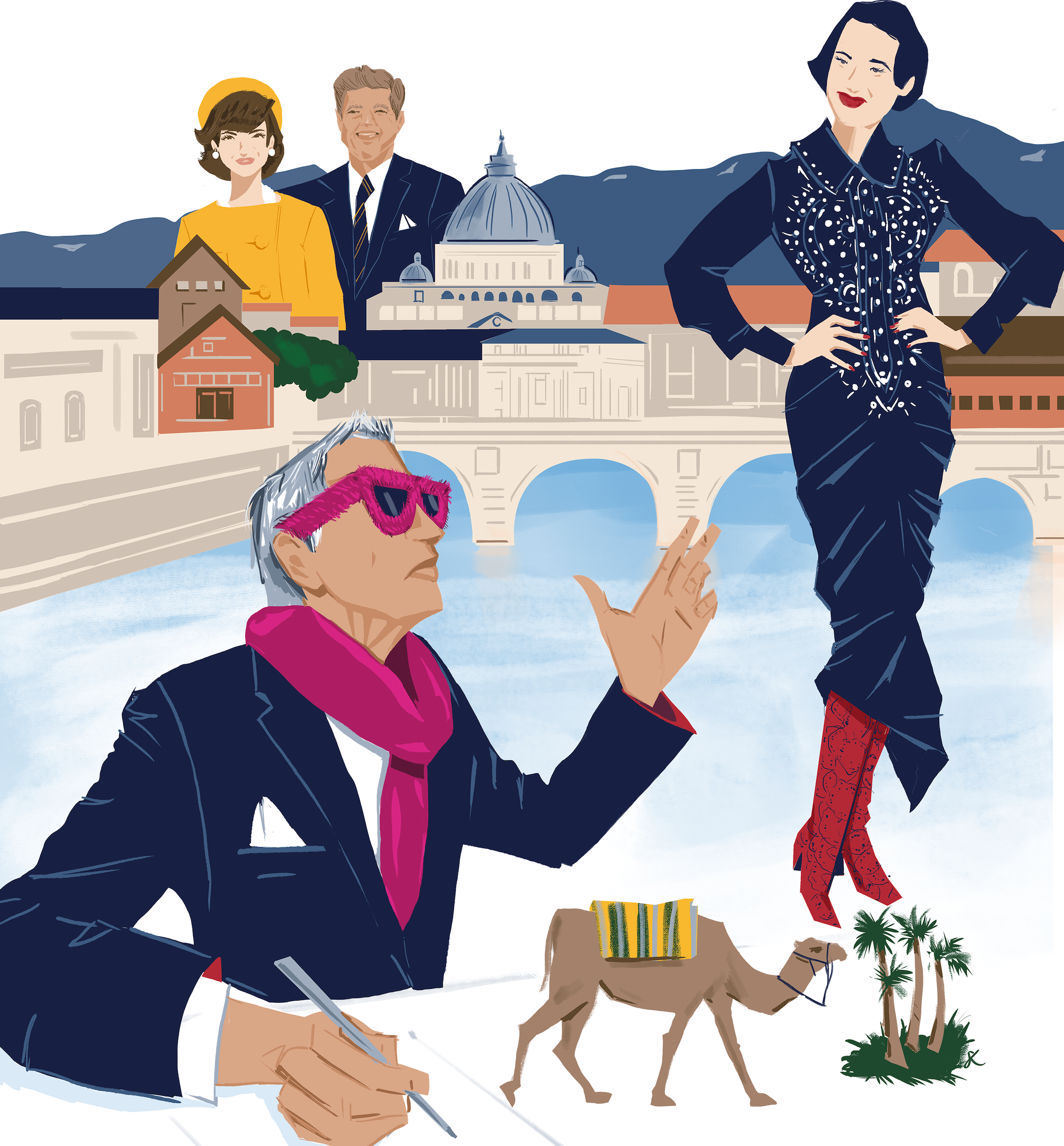 Why don't you write a fabulous memoir?
By Ben Widdicombe
Illustration by Sandra K. Peña

It’s hard to imagine that Frederick “Freck” Vreeland, 94, was any good at avoiding notice as a spy. In addition to having the most translucent of covers — publicly, the longtime CIA officer was a career diplomat, rising to become ambassador to Morocco — he just looks the part of a suave, Cold War secret agent, with his aquiline angles, patrician bearing, and impeccable tailoring. Then there’s the name — made famous by his mother, the fashion editor Diana Vreeland — which is also likely to leave an impression. But if that ever got in his way, at least he now has someone to commiserate with: It was only recently that Freck learned his older brother, the architect Thomas “Tim” Vreeland Jr., 96, also worked for the CIA.

Undercover is no longer Freck’s style, however. He recently joined Twitter and Instagram as @freckvreeland, where he serves wisdom and lewks, and is shopping a memoir about his remarkable life.

“We’re just coming out of a year of total craziness, and I think now is the time to publish,” he told Avenue from his apartment in Rome, with his third wife, Sandra, by his side. Visible behind them were mementos from their lives: a white plaster bust of Voltaire, acquired in a small French village; a bas-relief of his late second wife, Vanessa, with whom he shared a mansion in Marrakech, riding a camel; and a black-and-white-print of a tree, a gift to Sandra from Freck’s firstborn son Nicholas, who is a Buddhist monk and an accomplished photographer.

“Originally, my older son was a useless guy who ran off with mistresses beginning at the age of 15, and was out every night in New York, whooping it up in black tie. Whereas Alexander, the younger son, was out preaching something called the Inner Peace Movement. And then at a certain moment the two of them crossed, and the one who’d been a playboy became a Tibetan monk and the other one became a serious businessman,” Freck said. “And neither of them believed that I was pleased with the way they were turning out, but I was.”

Approval was not always easy to come by in the Vreeland family. “[My mother] looked down on anything I was doing,” Freck said. “If she had lived until I got the rank of ambassador, then she would have for the first time been pleased with the second son. But until she died, as far as she was concerned, I was wasting my life. It was painful.”

Among Freck’s duties in Marrakech was to squire then First Lady Jacqueline Kennedy around the city. Sandra recounts an anecdote from his memoir: “At one point Jackie is taking a picture of him, and he notices that her fingernails are bitten. And Freck says to Jackie, ‘Yes, I’m a nail biter too,’ and they laughed. She said, ‘ Well, we both have obsessive mothers, and maybe that’s why.’”

Another Kennedy memory is accompanying JFK to his famous 1963 speech in West Berlin. Moments before taking the lectern, the president inquires about the provenance of a historical quote he is scripted to utter, and is horrified to learn that it came from the godfather of Protestantism himself, Martin Luther. “He said, ‘Me, deeply Catholic, to think that I would ever conceive mouthing anything like that!’ So I had 30 seconds to dream up a phrase in German.” And that, as Freck tells it, was the origin of the famous line “Ich bin ein Berliner.”

To be fair, this version is disputed: Kennedy’s speechwriter, Ted Sorensen, also claimed to have coined the phrase. Freck sniffs in response: “Having written every other last word of that long and important speech, he felt entitled to steal credit also for those four.” (For good measure, Freck also accuses Sorensen “indirectly of being responsible for Bobby Kennedy being shot.”)

But enough politics! Enquiring minds want to know: In “Why Don’t You?”, his mother ’s quirky Harper’s Bazaar advice column, she once famously wrote: “Why don’t you rinse your blond child’s hair in dead champagne to keep it gold, as they do in France?” Did she ever practice this on Freck?

He laughs at the suggestion. “Not as far as I can remember,” he said, “so probably no.”