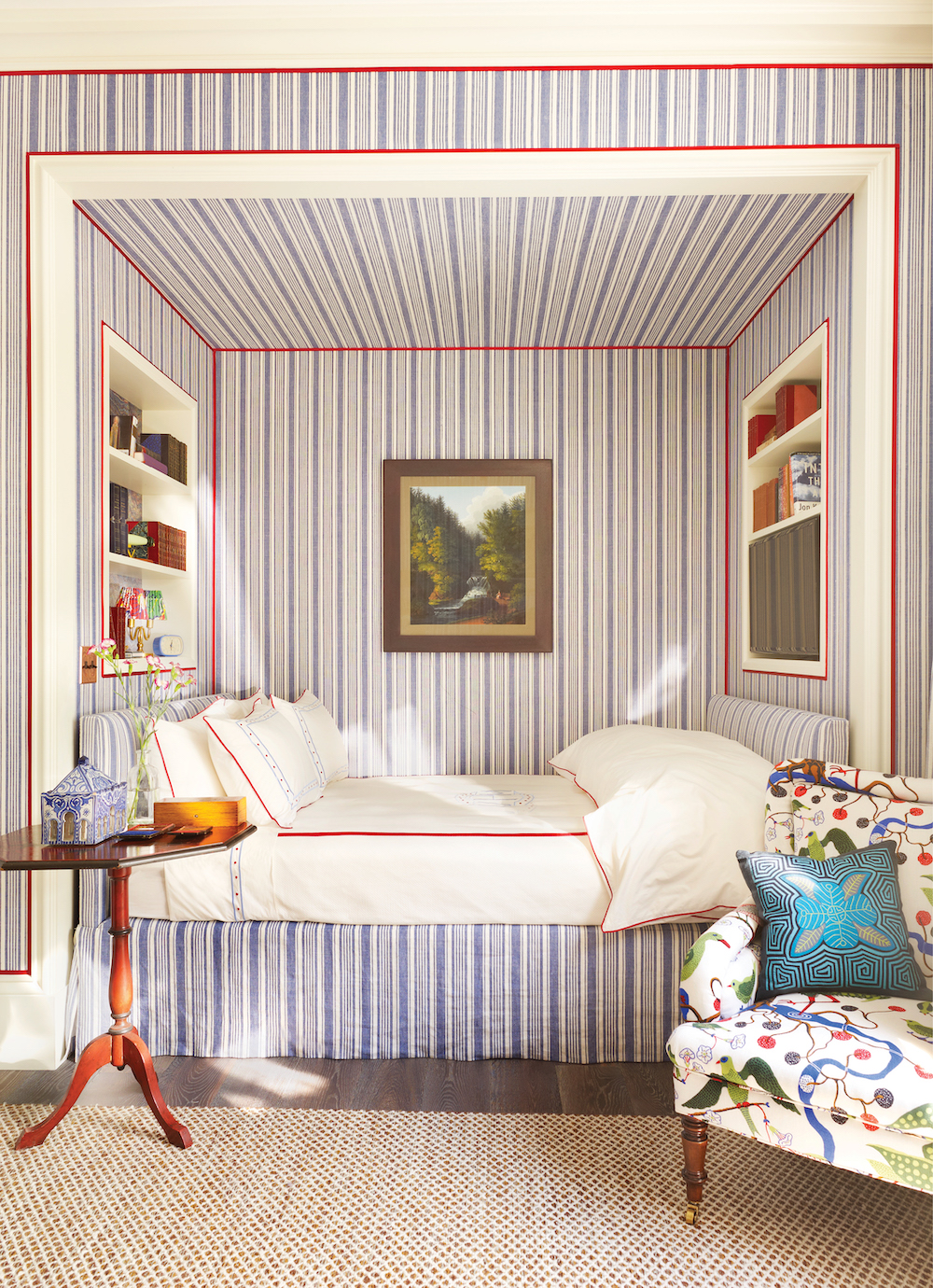 Custom Wallpaper and Blue-Chip Art: Why Children's Rooms are the Next Design Frontier
Family > Living

Custom Wallpaper and Blue-Chip Art: Why Children's Rooms are the Next Design Frontier

Gone are the days when the nursery was an interior design afterthought, writes Susanna Salk in her new book, "Dream Rooms for Children."
By Susanna Salk

Children’s rooms are not just about the present days; they are about the tomorrows. How can their rooms of today nurture them into the grown people they will become?

When we moved into our current house a few years ago, my teenage son Winston, who was then living nearby at a boarding school, was determined to transform his small bedroom into a place where he could retreat in style on the weekends. From his dorm room he texted me a photo from the ’70s of a living space that can be best described as a place where James Bond might relax between assignments. A few days later, his sketch followed. A design dialogue started to flow that eventually included our carpenter and the space was soon realized, complete with blue velvet seat cushions and framed vintage movie posters. It’s not just his cocoon, it’s become his style passport.

As a culture we are starting to embrace the philosophy — not to mention the aesthetics — that children’s areas deserve to be places that don’t stagnate at the stage where the children are at that very moment. Basic primary colors, and fairy-tale and superhero characters, are ceding to sophisticated patterns, unique colors, and vintage furniture with dashes of whimsy. Children are being given more of a center stage in their little worlds at home, and those worlds in turn are aesthetically on a par with the adult spaces in the rest of the house.

As I compile some of my favorite spaces for children for this book, I see rooms that identify a child as a whole child, not necessarily only by gender. I see workspaces that cohabit cleverly within play spaces, thanks to open minds and open planning. I see that children have had an even greater hand in their room’s creation, and I see parents telling designers how important it is to them that their newborn’s space adapt to their baby’s eventual growth, both physically and emotionally. I see dining room furniture placed below framed children’s drawings and I see rocking chairs placed alongside blue-chip modern art. There aren’t just two brands or colors for cribs, there are hundreds. I see bunk beds worthy of luxury cruise ships.

But the most repeated word by both designers and parents when describing their intent at fashioning these spaces is “timeless.” Parents want spaces that can adapt and accommodate whatever the future may bring. Because when it comes to our children, we may give them time-outs, but in the end there is never enough time with them before they leave.

“My priority for this room was to engage the imaginations and to inspire — much as I was as a child by the wallpapers with which my father [de Gournay founder Claud Cecil Gurney] filled our homes,” says Hannah Cecil Gurney of her three-year-old’s London bedroom with its play area. “The hand-painted de Gournay wallpaper depicts the sprawling grasslands of the African savannah, filled with animals rendered in a striking monochrome palette, which I love for its non-gender-specific theme, so the room can be shared or reinhabited easily.” Cecil Gurney offset this palette with very specific accents of bold primary colors, such as the vibrant yellow of the custom-built shelving.

“This playhouse is for my beloved grandniece, Elle, who is seven years old,” says the New York–based designer Alex Papachristidis. “It was a gift from her grandmother, my sister Ophelia. I wanted to create a small, magical world for her, which would be her very own to play in and invite her friends to.” Of the interior, he says: “All the furniture had to be miniature to match the scale of the house and so I found French antique pieces that worked perfectly.” Papachristidis had the floor stenciled in the manner of Baroness Pauline de Rothschild’s London bedroom. For the fabrics and wallpaper, he chose Manuel Canovas from Cowtan & Tout, mixing lively prints and toiles in a playful color palette.

“This room was designed with both the newborn and new parents in mind,” says interior designer Dina Bandman, who drew inspiration from her travels to Italy’s Amalfi coast with its prolific lemon trees. “I wanted to create a gender-neutral nursery, and when a green and yellow color palette came to mind, I collaborated with de Gournay to create a new sequin-embellished Lemon Grove wallpaper entirely for this room.” Bandman also fashioned the exquisite four-poster Lucite crib to enhance, rather than compete with, the room’s fresh and fanciful design. “My design intention is for baby to nestle in style and for parents to feel uplifted and energized in this special nursery.”

New York designer Katie Ridder found inspiration for her daughter’s bedroom design from a bedroom she visited in Charlottenhof Palace in Potsdam, which was tented and carried out completely in blue-and-white stripes. Ridder created her own variation in her family’s weekend home by covering the walls and ceiling of the niche in a striped linen trimmed with red grosgrain ribbon. Swedish antiques and accent fabrics in bright primary colors give this room a fresh spin. “Peter and I wanted the bedrooms in our houses to be cozy,” says Ridder. “We placed our daughter’s bed in the niche to make the most of the space.”

A downstairs bedroom in the Brooklyn home of architects Cassandra Warner and Jeremy Floto is also a dreamy destination for their two young girls’ playtime. “It’s a quiet, open space that allows for the exuberance of life with small children to unfold in all its messy glory,” says Floto. “The color palette is muted and gray, with uncluttered furnishings. The wallpaper is Etched Arcadia Mural at Anthropologie Home. The walls are skimmed in cement mixed with pigment for warm undertones.”

Reprinted from © Dream Rooms for Children by Susanna Salk, Rizzoli, 2021

Mugrabi Divorce Settled: "She Asked for $100 Million"
Recommended for You
Living
Gym Dandy: The Best Fitness Gear for Fashion Lovers
Living
Louise Nevelson Was Not Your Average Grandma
Family
How the Daughter of a Princess Got Thrown Out at 17