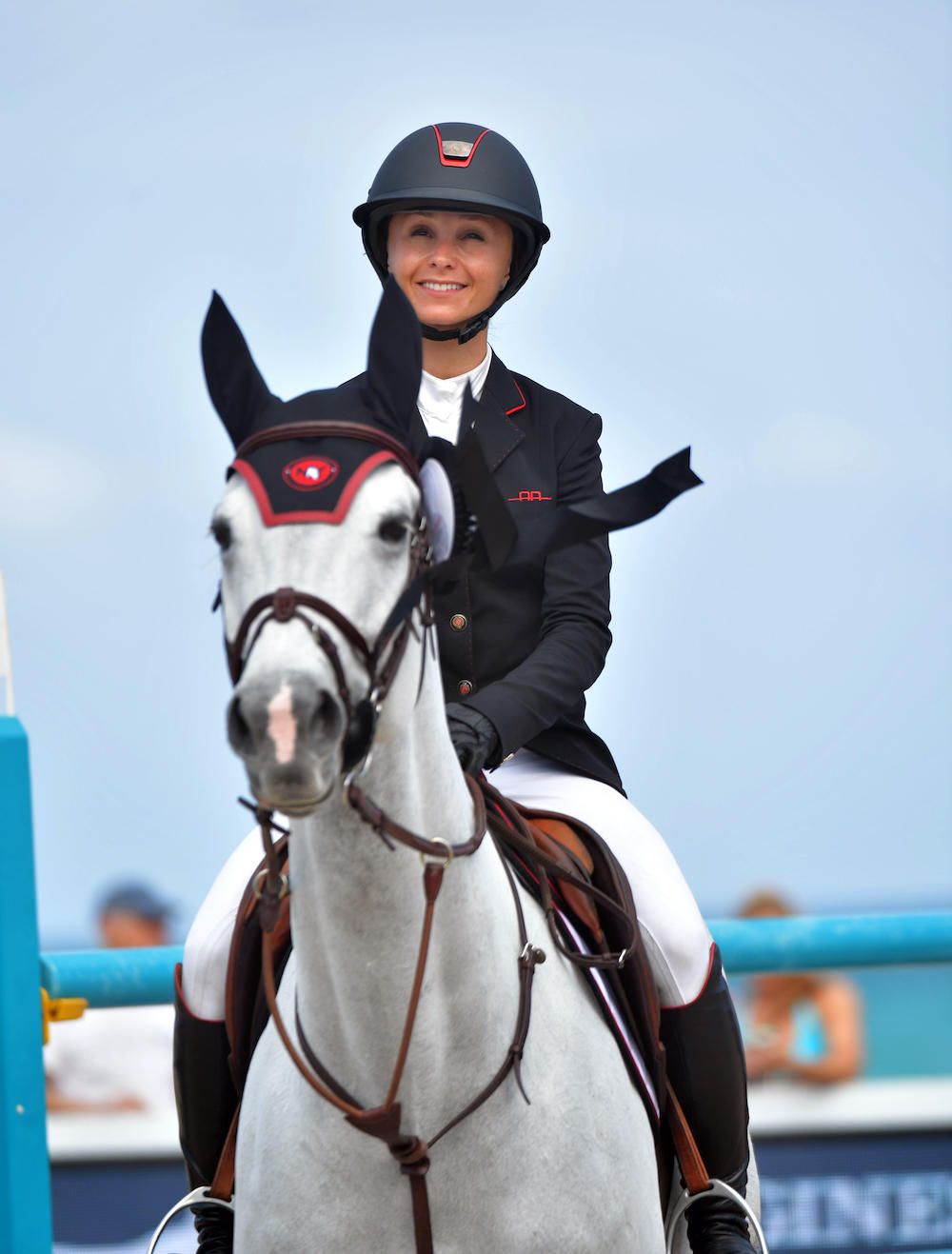 Georgina Bloomberg is Speaking Fast, Training Hard, and Turning into Her Mother
Style

Georgina Bloomberg is Speaking Fast, Training Hard, and Turning into Her Mother

In a restaurant around the corner from her uptown apartment, ahead of the Hampton Classic Horse Show, champion equestrienne Georgina Bloomberg met Avenue for drinks and dish
By Mike Albo
NEIGH SAYER Georgina Bloomberg with the handsome Quibelle in Wellington, Florida
Photo by Shawna Simmons-Whitty/SAS Equine Photography; Styling by Shawna Simmons-Whitty; Makeup and hair by Gina Simone; Top by Nouvelle Palm Beach; Earrings by Fab Finds by Sarah

I’m waiting outside a neighborhood restaurant on the Upper West Side for Georgina Bloomberg. Officially Pfizered, it will be my first indoor dining experience in a year, and I am having it with an heir to a $59 billion fortune.

Rushing down the street, she approaches with a strong-thighed power gait. “I’m so sorry I’m late. It’s because I live around the corner. It’s that typical New York thing — if we met downtown, I would be early.” She asks the host if we can dine in the back room, mindful that I get a good recording. We sit between plexiglass partitions at a table. No one else is there. She’s in the city just for a little bit before heading back down to Wellington, Florida (her tertiary home), to pack her things, her son, and her horses, and return north to her apartment here, but mainly to the house in North Salem and its barn and facilities. The horse show circuit is planning a full post-Covid comeback, and Bloomberg is a champion jumper.

She orders a black bean soup, chopped salad with shrimp, and a skinny margarita, which thrills me because now I can order a chardonnay and not feel judged. It’s been a long lockdown.

She asks the waiter to bring a container so she can save half her soup. “Don’t judge me. I’ve become my mother. We had this conversation at dinner last night about taking food home. My boyfriend [investment adviser Justin Waterman] has two half sisters. Their dad, who passed away a couple years ago, used to never let anybody in the family take food home because apparently it was very tacky. My mother — her father was in the Royal Air Force, so they were moving around a lot and they had no money. If somebody put something in front of you, you’re lucky to have it and you eat it. There’s no such thing as leaving food on your plate.”

“Totally!” I manage to reply between sips.

“I speak fast and I am repetitive” she warns. “Whenever I am interviewed, they’re like, can you slow down?” I have been stuck inside for a year. My Zoom-pale skin hungers for the vitamin D of human contact. Not just any contact, but the “meet me for martinis and let’s gossip” kind. And who better for that than the impeccable, boldface Ms. Bloomberg? The excuse to gossip — I mean, do journalism — is the Hampton Classic horse show, which returns in late August after having been canceled in 2020 for the first time in its nearly 50-year history. Bloomberg, who is on the Classic’s board, has already proven herself as a jumper — garnering top prizes, and appearing on the covers of fancy horse mags like Equestrian Living and Noëlle Floyd.

Her philanthropic work continues unabated — including The Rider’s Closet, a venture she started 15 years ago, at age 23, to provide riding clothing to competitors in need (it’s an expensive sport, natch). Her young adult novels, including her debut The A Circuit, have been out for a couple years. Even the chatter about her having a child, unmarried, with her then-boyfriend-now-just-friend Argentine show jumper Ramiro Quintana, has died down. Her son Jasper is seven now.

There is a new photo book by Jim Dratfield coming out — Her Horse — about the relationship between girls and horses for which she wrote the foreword. The publicist asked that I mention her sponsorship with TechnoGym — a pricey line of home gym equipment she uses (when she isn’t squeezing a Pilates ball between her legs to strengthen the muscles needed to grip a saddle); she likes the Kinesis machine because “it’s very important for a horse jumper to be fit all over”).

But Bloomberg didn’t really push any of that on me. I was told initially not to ask about her father, or to talk about her accidents (she has fractured her back twice, exacerbated by reconstructive surgery for a curvature of the spine), but she didn’t hold back. She recovered from the surgery doped up on painkillers for three months, bingeing Toddlers & Tiaras (“It’s amazing, I’m totally addicted.”) And as proud as she is of her father’s political work, she can’t forget how he announced his run for mayor the day she graduated from high school. “I was like: ‘that one day?’” she says with a sigh.

She does talk fast. Maybe she was also desperate for a lunch and some dish like we all had in the before-times? (Heiresses — they’re just like us!)

Unlike older sister Emma, who secretly got divorced from first husband Christopher Frissora and then married Jeremiah Kittredge just last February, Georgina isn’t media shy — she’s Wikipediable, with a healthy Instagram. She can be seen frolicking with her boyfriend on vacation in the Dominican Republic, and, like most proud moms, delights in posting her son’s pony riding achievements. With a face that a beauty blog would classify as a perfect circle, she is photogenic and petite, but exudes strength in person. In a kidnap thriller, she would do a round-house kick, break down the door, and escape way before Liam Neeson ever arrived. But — oh yes — we’re here to talk about the Hampton Classic. (Waiter? Another chardonnay, please.)

Bloomberg has been a competitive rider since she was four years old. The athletic sport (and it is athletic, she will remind you) became her world. No matter how she tried to pursue other things — fashion design at Parsons; photography and painting at New York University’s Gallatin School of Individualized Study — it kept calling her back. That may be because, unlike subjective pursuits such as art, no one can say Daddy bought her jumping trophies. Bloomberg explains that horse shows consist of two divisions: hunters and jumpers. Hunters is focused on technique, scored by judges much like figure skating. Jumpers is essentially a race. “It’s just purely competition. If you clear the jump and you’re the fastest, you’re going to win. Nobody can say, ‘Oh, she won because the judge liked her.’”

Jumping is also one of the few mixed-gender sports out there. Bloomberg could compete against a muscular six-foot man, or a younger woman in her twenties (she is 38). But, she stresses, what matters is the match between horse and rider, and the rider’s dedication to that connection. Unlike the racing world, horse jumping takes months of preparation with the animal.

“You’re getting to know them at home, you’re not just jumping on and going.” Sure, money can buy the time at the barn, but, like figure skating, talent has no class. “I think of the top riders right now, and none of them come from money,” she says.

Bloomberg has put in her time. As a teenager, dating and relationships came mostly from the horse circuit. “I was just like, stay away from the New York City type of guy,” she says. In her twenties, she saw friends settling down, families starting. When the baby itch hit, she chose to have a child without the wedding ring and prenup. “I am, in my opinion, a single mom, but I’m very grateful that Jasper knows who his dad is, and that he’s a friend of mine. When I was pregnant, when Jasper was younger, I envied all my friends who were happily married. Now I have friends who are going through these horrible custody battles where they won’t speak to each other.”

She wants more kids. But that comes with a sacrifice. Unsurprisingly, there is gender disparity in the horse show world. There may be a special connection between girls and horses, but at the top level, females fall away. “There’s never been a female Olympic gold medalist” in the sport, she says.

That’s because jumping is one of the few sports where riders peak later in life, in their thirties and forties. For women, the choice of family or sport becomes stark. “You have to face a life decision as to whether you want to have children and have a family, or whether you want to pursue this. When I look at the top, and I see the time they put in, and the sacrifices they make and what their family situation is, what their lifestyle is — I don’t want to be them. I want to have their level of success, but I know what it takes to have their level of success, and I don’t want to do that. I’ve seen what it takes, and men get let off easy that way.”

Still, she isn’t ready to give up on competing. “To me, when I go to barn, it’s not for pleasure. It’s because I’m preparing for the next competition. I’m supercompetitive. Don’t play me in Scattergories.” The check comes. I make a feeble gesture to pay (later, my recreation of this moment with friends will become comedy gold), but Bloomberg immediately pulls out her card. We walk out, her holding her black bean soup and rushing over to her son’s class at the American Museum of Natural History, me putting on my mask and taking the A train downtown, believing, once more, that the city is fun again.