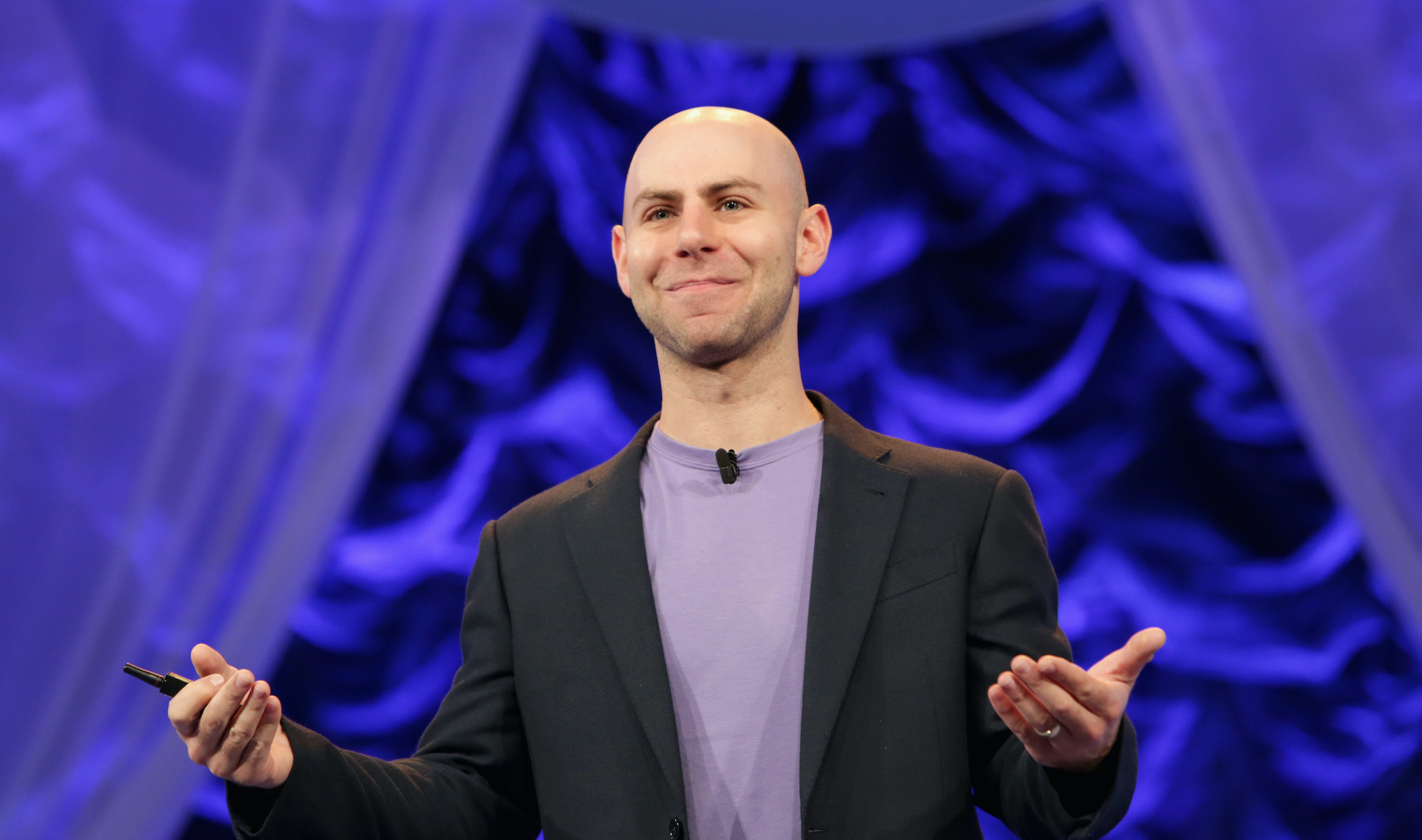 Want to Succeed at Work? Learn to Give More Than You Get
Living

Want to Succeed at Work? Learn to Give More Than You Get

With his groundbreaking bestseller Give and Take, the organizational psychologist Adam Grant created a revolutionary way of thinking about personal success. In the following excerpt, he explains why it pays to give
By Adam Grant
PURPLE CURTAIN MAJESTY: Adam Grant addressing the Pennsylvania Conference for Women in 2016
Photo by Marla Aufuth/Getty Images

According to conventional wisdom, highly successful people have three things in common: motivation, ability, and opportunity. If we want to succeed, we need a combination of hard work, talent, and luck. But there is a fourth ingredient, one that’s critical but often neglected: success depends heavily on how we approach our interactions with other people.

Every time we interact with another person at work, we have a choice to make: do we try to claim as much value as we can, or contribute value without worrying about what we receive in return?

I’ve dedicated more than ten years of my professional life to studying these choices at organizations ranging from Google to the U.S. Air Force, and it turns out that they have staggering consequences for success. Social scientists have discovered that people differ dramatically in their preferences for reciprocity — their desired mix of taking and giving. There are two kinds of people who fall at opposite ends of the reciprocity spectrum at work. I call them takers and givers.

Takers have a distinctive signature: they like to get more than they give. They tilt reciprocity in their own favor, putting their own interests ahead of others’ needs. Takers believe that the world is a competitive, dog-eat-dog place. They feel that to succeed, they need to be better than others. To prove their competence, they self-promote and make sure they get plenty of credit for their efforts.

In the workplace, givers are a relatively rare breed. They tilt reciprocity in the other direction, preferring to give more than they get. Whereas takers tend to be self-focused, givers are other-focused, paying more attention to what other people need from them. These preferences aren’t about money: givers and takers aren’t distinguished by how much they donate to charity or the compensation that they command from their employers. Rather, givers and takers differ in their attitudes and actions toward other people.

Professionally, few of us act purely like givers or takers, adopting a third style instead. We become matchers, striving to preserve an equal balance of giving and getting. Matchers operate on the principle of fairness: when they help others, they protect themselves by seeking reciprocity. If you’re a matcher, you believe in tit for tat, and your relationships are governed by even exchanges of favors.

It’s tempting to reserve the giver label for larger-than-life heroes such as Mother Teresa or Mahatma Gandhi, but being a giver doesn’t require extraordinary acts of sacrifice. It just involves a focus on acting in the interests of others, such as by giving help, providing mentoring, sharing credit, or making connections for others. Outside the workplace, this type of behavior is quite common. According to research led by Yale psychologist Margaret Clark, most people act like givers in close relationships. We help our families and friends without keeping score.

Many of us are intuitively drawn to giving. Over the past three decades, the esteemed psychologist Shalom Schwartz has studied the values and guiding principles that matter to people in different cultures around the world. One of his studies surveyed reasonably representative samples of thousands of adults in Australia, Chile, Finland, France, Germany, Israel, Malaysia, the Netherlands, South Africa, Spain, Sweden, and the United States. He translated his survey into a dozen languages, and asked respondents to rate the importance of different values.

Here are a few examples:

List 2: Helpfulness (working for the well-being of others); Responsibility (being dependable); Social justice (caring for the disadvantaged); Compassion (responding to the needs of others).

In all 12 countries, most people rate giving as their single most important value. They report caring more about giving than about power, achievement, excitement, freedom, tradition, conformity, security, and pleasure. In fact, this was true in more than seventy different countries around the world. Giver values are the number-one guiding principle in life to most people in most countries.

On some level, this comes as no surprise. As parents, we read our children books like The Giving Tree and emphasize the importance of sharing and caring. But we tend to compartmentalize giving, reserving a different set of values for the sphere of work. We may love Shel Silverstein for our kids, but the popularity of books like Robert Greene’s The 48 Laws of Power — not to mention the fascination of many business gurus with Sun Tzu’s The Art of War — suggests that we don’t see much room for giver values in our professional lives.

The fear of being judged as weak or naïve prevents many people from operating like givers at work. Many people who hold giver values in life choose matching as their primary reciprocity style at work, seeking an even balance of give and take. In one study, people completed a survey about whether their default approach to work relationships was to give, take, or match. Only 8% described themselves as givers; the other 92% were not willing to contribute more than they received at work.

Professionally, all three reciprocity styles have their own benefits and drawbacks. But there’s one style that proves more costly than the other two. You might predict that givers achieve the worst results — and you’d be right. Research demonstrates that givers sink to the bottom of the success ladder. Across a wide range of important occupations, givers are at a disadvantage: they make others better off but sacrifice their own success in the process.

Across occupations, it appears that givers are just too caring, too trusting, and too willing to sacrifice their own interests for the benefit of others. There’s even evidence that compared with takers, on average, givers earn 14% less money, have twice the risk of becoming victims of crimes, and are judged as 22% less powerful and dominant.

So if givers are most likely to land at the bottom of the success ladder, who’s at the top — takers or matchers? Neither. When I took another look at the data, I discovered a surprising pattern: It’s the givers again.

Givers dominate the bottom and the top of the success ladder. Across occupations, if you examine the link between reciprocity styles and success, the givers are more likely to become champs — not only chumps.

What’s unique about the success of givers? Let me be clear that givers, takers, and matchers all can — and do — achieve success. But there’s something distinctive that happens when givers succeed: it spreads and cascades. When takers win, there’s usually someone else who loses. Research shows that people tend to envy successful takers and look for ways to knock them down a notch. In contrast, when givers win, people are rooting for them and supporting them, rather than gunning for them.

Givers succeed in a way that creates a ripple effect, enhancing the success of people around them. The difference lies in how giver success creates value, instead of just claiming it.

What I find most magnetic about successful givers is that they get to the top without cutting others down, finding ways of expanding the pie that benefit themselves and the people around them. Whereas success is zero-sum in a group of takers, in groups of givers, it may be true that the whole is greater than the sum of the parts. Armed with this knowledge, I’ve seen some people become more strategic matchers, helping others in the hopes of developing the relationships and reputations necessary to advance their own success.

Can people succeed through instrumental giving, where the primary intent is getting? I have suggested that in the long term, the answer might be no.

There’s a fine line between giving and clever matching, and this line blurs depending on whether we define reciprocity styles by the actions themselves, the motives behind them, or some combination of the two. It’s a deep philosophical question, and it’s easy to identify with a range of views on how strategic matchers should be evaluated.

On the one hand, even if the motives are mixed, helping behaviors often add value to others, increasing the total amount of giving in a social system. On the other hand, our behaviors leak traces of our motives. If recipients and witnesses of our giving begin to question whether the motives are self-serving, they’re less likely to respond with gratitude or elevation. When strategic matchers engage in disingenuous efforts to help others primarily for personal gain, they may be hoisted by their own petard: fellow matchers may withhold help, spread negative reputational information, or find other ways to impose a taker tax.

To avoid these consequences, would-be matchers may be best served by giving in ways that they find enjoyable, to recipients whose well-being matters to them. That way, even if they don’t reap direct or karmic rewards, matchers will be operating in a giver’s mindset, leading their motives to appear — and become — more pure. Ultimately, by repeatedly making the choice to act in the interest of others, strategic matchers may find themselves developing giver identities, resulting in a gradual drift in style toward the giving end of the reciprocity spectrum.

We spend the majority of our waking hours at work. This means that what we do at work becomes a fundamental part of who we are. If we reserve giver values for our personal lives, what will be missing in our professional lives? By shifting ever so slightly in the giver direction, we might find our waking hours marked by greater success, richer meaning, and more lasting impact.