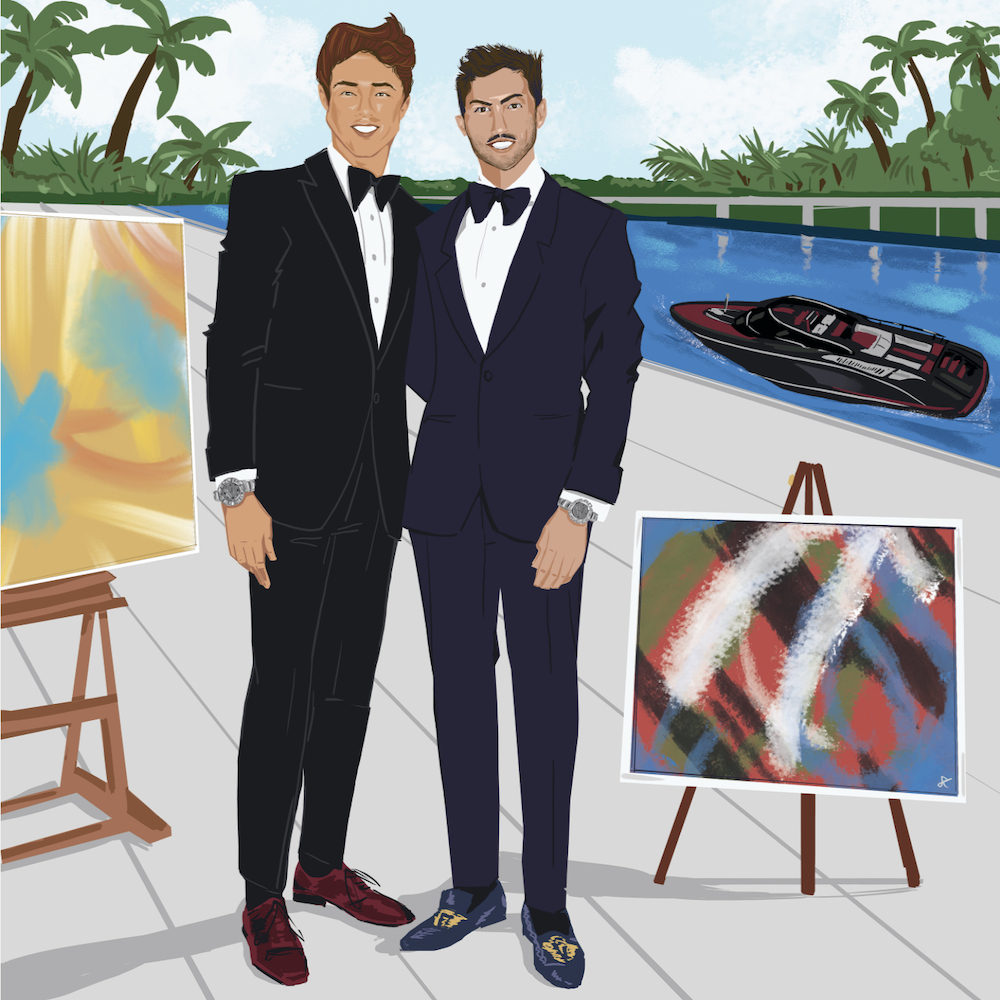 The Palm Beach art scene — long dominated by local establishment players, and recently bolstered by the arrival of New York mainstays such as Sotheby’s, Pace, and Acquavella — isn’t exactly known for its youthful vigor.

“The joke was always that everyone here was 80,” says Nick Hissom, the 29-year-old co-founder and -owner of Aktion Art, a new boutique gallery and advisory, “but it’s changing quickly. There’s a huge influx of young people, and the place is becoming more of a permanent, international scene.”

Hissom and Kameron Ramirez, his 22-year-old boyfriend and business partner, are helping apply the defib paddles. Located on the second floor of the Esplanade, among the area’s abundant luxury stores, Aktion Art caters to the crowd who think nothing of spending big money on, say, a Damien Hirst after an afternoon shopping at Graff.

“A lot of serious collectors started coming here during Covid, as everywhere else was basically closed,” says Hissom, in an indeterminate drawl that is the product of having been born in London and educated at Le Rosey in Gstaad before the University of Pennsylvania. Adds Ramirez, who was born in Nicaragua and raised in Los Angeles and Palm Springs: “We have been coming here on and off for five years and knew some people in the art community, so we were in the right place at the right time.”

The peripatetic couple, who also have homes in New York and Los Angeles, met at the Meatpacking District’s Soho House in 2019 when Hissom was a model-singer-songwriter and Ramirez, at a precocious age, owned a film production company. Today, they are sitting in the living room of their glass waterfront house on N Lake Way, dressed casually (if expensively) for the eternal Florida summer, their luxury statement watches intertwined with college-dude fabric bracelets.

“Typical us,” notes Ramirez, surveying the sparely appointed room, “there’s not much furniture but lots of art.” Just as their gallery showcases emerging talents alongside museum-worthy heavy hitters on the secondary market (Hirst is showing currently, followed in February by a show of Cubist-inspired work by the British artist-not-the-writer Nick Hornby), the walls are a mix of blue-chip names alongside up-and-comers on their roster such as Kevin Hees and Connor Addison.

And Aktion’s program has been getting rave reviews from all the right arbiters. “It’s exciting to have two young art lovers in Palm Beach,” says the seasoned collector Beth Rudin DeWoody, who met the two at the Wynn gallery last season. “They are a great addition to the growing art scene.”

As befits their aspirations, Hissom and Ramirez have been making a name as philanthropists alongside their envy-inducing lifestyle. In addition to personally supporting Children International, UNICEF, and amfAR, as well as a variety of LGBTQ causes, Aktion Art has donated work that raised more than $100,000 for the Norton Museum of Art in Palm Beach, New York’s Museum of Arts and Design, and other institutions. They’re also in their element table-hopping at Bilboquet, BiCe Cucina, and Buccan; being on the water on their 38-foot Riva Rivamare, and entertaining at home for their friends, a junior jet set that includes Peter Brant Jr.; Emma Holzer; Leah Glimcher of Pace Gallery; Jeffrey Tousey of Beekman Social; Billy Gilbane; fellow gallery owners Devon and Tucker McCready; David Rothschild of Sotheby’s; and Makenzie Moon Phelan.

It’s a peachy set up for a couple of twenty-somethings — made possible, at least in part, by the fact that Hissom’s stepfather is billionaire real estate developer, casino magnate, and art collector Steve Wynn. (His mother and father are the British society figure Andrea and her banker ex-husband, Robert David Hissom.) If Nick is defensive about the entrée that Wynn affords him (he also serves as the director of the Wynn Fine Art in Palm Beach, directing the gallery and the family collection), he isn’t showing it. He says that he grew up as part of two families who all play nicely, before pointing to an antique credenza on top of which is a 1983 copy of Interview magazine with a young Brooke Shields on the cover.

“Check it out,” he says excitedly, flipping through the pages until he finds an interview with his stepfather, conducted by founder Andy Warhol himself. A polaroid that Warhol took of Steve was used as an advertisement for the “Generations: Warhol x Basquiat” exhibition at Aktion Art last year. Later, when asked if his arresting Rolex (a rare James Bond edition of the Pro Hunter Daytona in black) was a gift from Steve, he offers good-naturedly: “Nah, it’s from my dad. He is a huge James Bond fan and it’s one of seven.”

And if some people are going to dismiss his new concern as the latest distraction of a dilettante (Hissom’s previous efforts as a platinum-blond model and would-be pop star went largely unnoticed), then so be it. “It’s not like we’ve been waving a checkbook around town,” says the young gallerist. “We’re building something from the ground up, but I get it. At the end of the day, people are free to think what they want.”