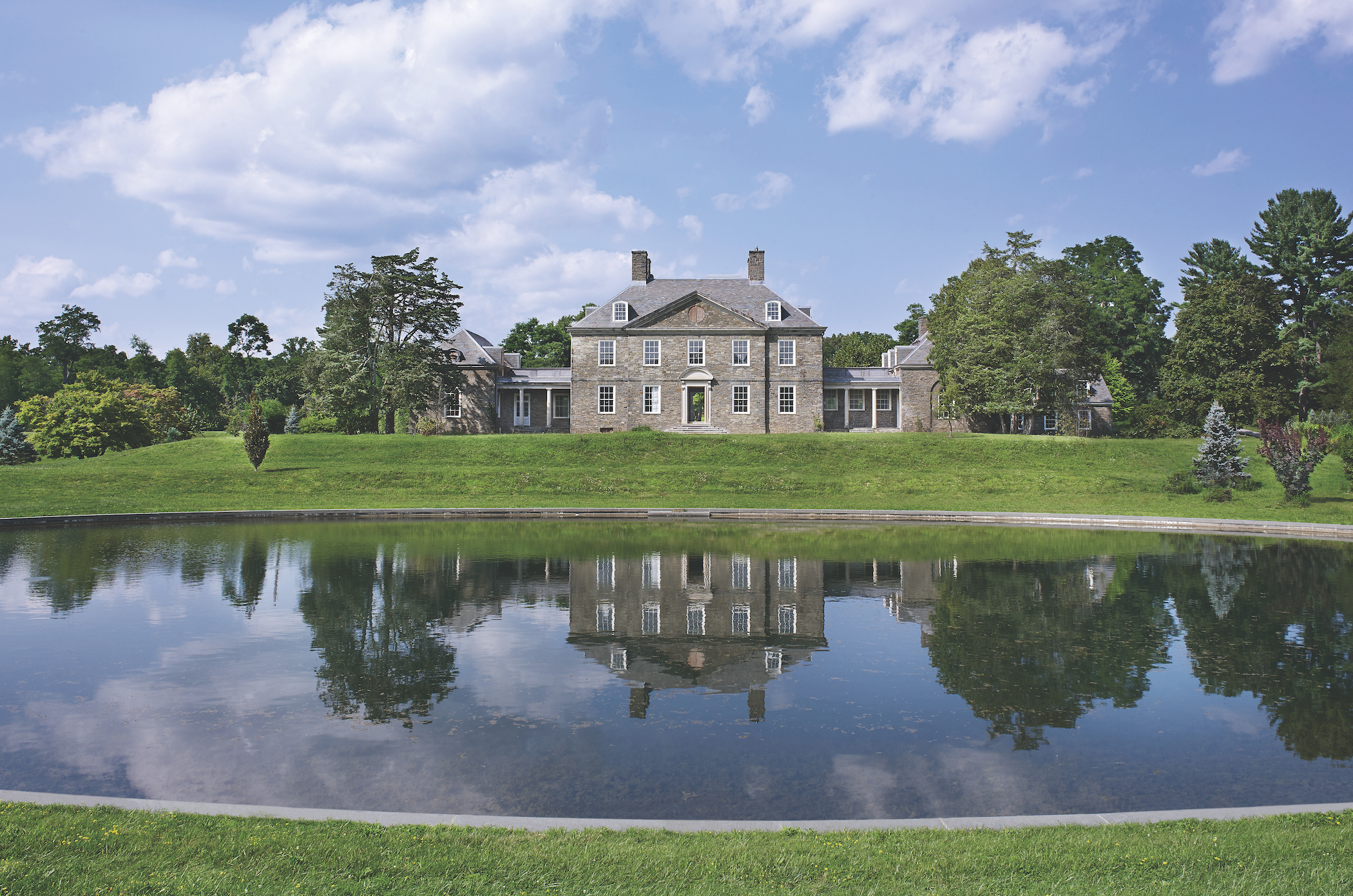 How We Renovated a Storied Estate During Lockdown
Living

How We Renovated a Storied Estate During Lockdown

The 'landed gently'
By Andrew Solomon
UPON REFLECTION Marienruh, built for heiress Alice Astor and her husband Prince Serge Obolensky in 1926, sits on 100 acres overlooking the Hudson River
Photo by Pieter Estersohn, from 'Pieter Estersohn, Life Along the Hudson, the Historic Country Estates of the Livingston Family'

We spent ten years renovating and restoring our country house in Rhinebeck (corrupt builders, hidden conditions, the town zoning board) and we moved in, officially, in late 2018.

There is little I loathe more than moving: the boxes were everywhere, the good offices of our beleaguered cleaning ladies seemed barely to clear the dust, there were no curtains, the furniture was either missing or not yet reupholstered, the plumbing made inexplicable shrieking noises, and the phones rang even when no one was calling. The yard was strewn with outdoor furniture that had not yet found its place, giving the impression that we were hoping to be cast in a remake of The Beverly Hillbillies. The books! Box upon box upon box. Getting the books on the shelves in any kind of coherent order was a project that demanded only a month or so of full-time attention, and who doesn’t have a month to while away in such a rewarding pursuit? Things we hated awaited wall space (why did we ever frame that?) and things we loved were impossible to hang. The hot water was so hot that you could burn yourself if you turned the faucet wrong. The internet came and went like a poltergeist, and the oven could be set only to raw or burnt. Our odd-sized bed had no sheets that fit, so we were camping out in a guest room without good lamps, leaving us with flashlights balanced on our knees for reading stories to our son George, then nine. Cumbersome things neither my husband John nor I remembered purchasing had been delivered to our house, and our favorite Regency settee had vanished along with the German baroque cradle John gave me the year we agreed to have a child. We had bemoaned the costs of construction terminable and interminable and celebrated being done with it, but somehow as we moved in, we incurred a panoply of peculiar bills that would have daunted the Sultan of Brunei.

In addition, there was a human cost to calculate: things I loved because they had belonged to my grandmother offended John’s aesthetic, while things he loved because they had belonged to his grandmother required of me a tact I had seldom deployed in our 20 years together. He had bought things he knew I wouldn’t like and then given them to me as presents so that I had to live with them. I had bought things I knew he might not like and then daringly positioned them where I thought he would accede to their display. I rearranged about half the things he objected to, and he caved on about half the things I objected to. I gave John a drawing as an anniversary gift that he correctly observed would look best in my study, where it now hangs — in the end, then, a present to myself. All marriages have their politics and ours had been fairly benign; now, we seemed to burst with arguments both suppressed and expressed. I pride myself on my intellect and humanitarianism, but I never forget that my first serious boyfriend and I broke up over our differing opinions about the curtains in a hotel in Sintra. Maps of Portugal still make me sad.

Moving in was far more gradual than we had anticipated. John vehemently took on the picture-hanging, rather to my irritation, then proved gifted at it, rather to my surprise. I ran the show on the pelmets since I’m the pelmet enthusiast in our family (every family should have one). I ordered all the dog beds and most of the lampshades. We had of course been in negotiations like this since the first designs were proposed for the house by our beloved friend and trusted designer Robert Couturier, whom I had known for 30 years and who had been our stalwart through the interminable construction process. Robert functioned as a visionary therapist, proposing alternate solutions whenever John and I were fixated on opposing strategies. I could tell when Robert was pretending to agree with John for the sake of peace, but I could never tell when he was pretending to agree with me. I mostly agreed with Robert; doing so made life easier and his taste ultimately accorded with my own. But there were frustrating inefficiencies in the process. I tried to wheedle and beguile out of his office the fundamental decorative items we so clearly needed, then occasionally got all dramatic and peevish until, bit by bit, things began to show up. I occasionally got dramatic and peevish with John, too, and so did he with me. George watched all this neurotic conflict in a state of bewilderment. He had seen us agree on so many direly important things and now there was a basso continuo of passive aggression thrumming under our happy family.

The first year in a new house is always experimental, but by Christmas of 2019, we had resolved many of the most pressing issues and I had ceased to regret that we ever contemplated a house in the country. We passed some pleasant winter weekends in Rhinebeck and drank champagne in front of the fire. The phones no longer rang at all, most of the rooms felt unfinished but habitable, and my beloved research assistant had dealt with the books. The lighting was all wrong in most of the rooms but we at least knew how we wanted to fix it. The pot rack! Well, one can live without a pot rack for a while if the beleaguered man who is making it does gorgeous metalwork on a fitful basis. I finally had the family photos all printed to the right sizes for the 19th-century frames I had collected and out they went on the big console tables in the living room. They made the house feel like ours — at least, they made it feel that way to me.

When George’s spring break, 2020, rolled around, we headed off for a week in the tropics with my extended family, only to depart early because the border was being sealed. Upon our return, we drove from the airport to Rhinebeck and moved temporarily into living permanently in what we’d imagined to be a weekend house. As the Covid months wore on, the place took on the feeling that places have only when they are genuinely inhabited, the character no house has unless its owners can find their way through it in the dark. We were no longer perched there like birds ready to take wing with a change of the wind. We burrowed in like moles. I had always been a city boy, born and bred in New York and later an inhabitant of London, of Moscow, of big, busy metropolises where everything was happening at once. John joked that my idea of appreciating the countryside was looking out the window at sunset through the bottom of a wine glass. But now there were no cities: New York as we’d known it was erased. While isolation would have felt sinister in Manhattan, it felt appropriate in Rhinebeck.

I was overwhelmed with gratitude that this 12-years-by-then project had come to fruition in time for us to retreat there and was perhaps grateful also that it hadn’t been ready sooner, that we were still discovering the thrill of residence, which made our sequestration feel more like an adventure and less like a prison sentence. Unlike many of my friends, I could go out for walks any time and without a mask; I could take George to the trampoline; I could eat on the loggia. John had planted a vegetable garden and we had tomatoes so sweet they might have been nectarines. It is true that I sometimes felt like a B-movie Marie Antoinette in this rural idyll — frankly, I would have gone for a flock of sheep and an outfit designed for appearing to herd them — but the first order of business was to remain cheerful, and we mostly did.

I arrived at material obsessions to distract me from the fact that we might all die soon from a deadly virus that had already snuffed out people I knew, leaving us quietly bereft. When I couldn’t cope with reports of refrigerated trucks full of corpses, I measured for the missing lampshades. When I was working on my book and failed to persuade the words to come, I went online looking for antique tapestry cushions. When I felt that the intensity of sheltering with my husband, my son, and my surrogate father-in-law was more than I could bear, I rearranged the dishes so that they had sensible permanent locations. And when the fact that Donald Trump was president struck terror and outrage into my soul, I figured out where we could best deploy the Chinese Chippendale table (which was definitely not Chinese and probably not Chippendale, though it was, at least, a table).

This whole line of behavior drove our son wild with irritation. George is boyish to an extent that seems almost embarrassing to gay parents. He would happily wear the same t-shirt and nylon shorts (where on earth did the nylon shorts even come from?) every day and wouldn’t brush his hair for a month at a time. He likes his comforts and wants the bed to be yielding and the pillows to be soft, but whether the linens are trimmed in the same color as the upholstered box spring is a matter to which he refused attention even after it was delineated to him a dozen triumphant times. He liked good restaurants when one could still go to them and he is a food snob, turning up his nose at overcooked fish or doughy pizza, but whether he is served on Spode, Meissen, Flora Danica, or paper plates is a matter of sheer indifference to him. He knows our house to be beautiful more than he perceives it to be beautiful and he doesn’t much care either way.

I had been working for months on an article about polygamy and polyamory, the details of which I thought as interesting a topic as any other available one, given that none of us was doing anything but that (me), George’s schoolwork (him — and he definitely did not want to discuss it at dinner), and planting things (John). So I often shared information about my day’s progress on Utah fundamentalism. George, thoroughly exasperated, finally said, “Daddy, don’t you ever talk about anything besides Mormons and curtains?”

Reprinted from Home: A Celebration, edited by Charlotte Moss, Rizzoli, copyright 2021. The book is published in collaboration with No Kid Hungry, a campaign committed to ending hunger and poverty.