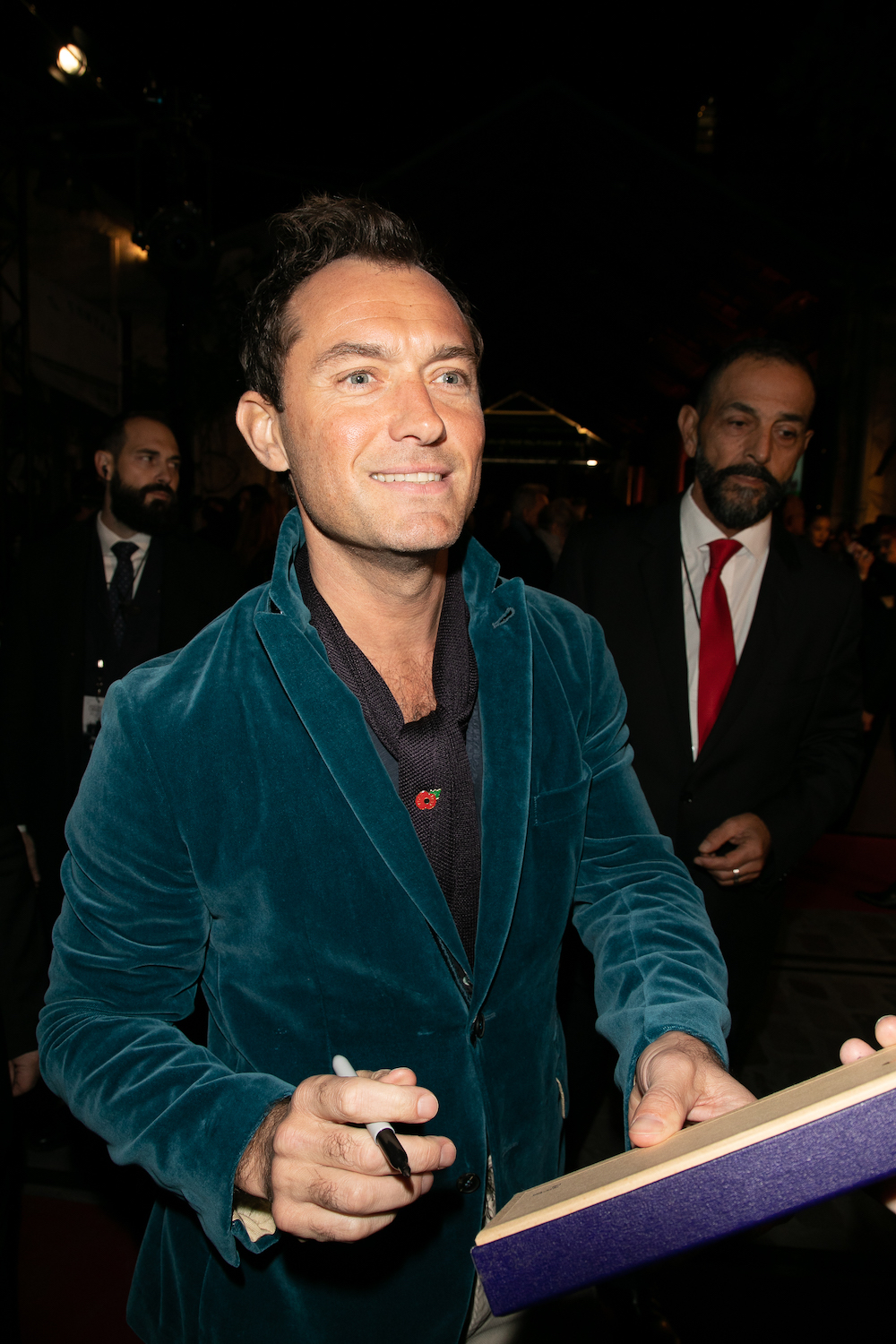 Tales from the Gossip Mine
City Life > Events

Tales from the Gossip Mine

In his new book, "Gatecrasher," Avenue’s editor-in-chief recalls being a gossip columnist at the New York Daily News during the early aughts
By Ben Widdicombe
Photo by Getty Images

Each night on the beat was a blur of brief interactions with super-famous people. The job of a reporter on the celebrity page is not to surprise stars when they’re off duty but to speak with them at prearranged press opportunities, such as their own film premieres. So mostly they’re expecting to talk to journalists and manage to be delightful.

Meryl Streep has the ability to fix you in her gaze as she’s speaking as if you are the most fascinating person she’s ever met. When Jude Law decides to be “on,” it’s like interviewing a tanning bed. Hugh Grant and Kate Winslet still manage to give thoughtful answers to red-carpet questions they must find utterly banal. Hugh Jackman is even more charming and sincere in person than he appears on camera; so is Tom Hanks.

But sometimes I found that embodying your on-screen image is not always a good thing.

In the flesh, Robin Williams was so much like his manic, desperate-to-entertain persona that it seemed to be eating him up from the inside.

Occasionally there was schtick. To drum up interest in the gossip pages, publicists promoting the romantic comedy Something’s Gotta Give put it about that there was a real-life romance taking place between its leads, Jack Nicholson and Diane Keaton. This seemed highly unlikely.

Nevertheless, when I interviewed the stars at the Boathouse in Central Park following the film’s New York premiere, Diane, then aged 57, conducted the entire conversation sitting girlishly in the lap of Jack, who was then 66. The scene was uncomfortable for everyone. But the redoubtable Hollywood publicist Pat Kingsley sat nearby and didn’t take her eyes off them, as if she were their parole officer.

At the other extreme were those stars who just hated dealing with journalists. I’ve never approached Liam Neeson, Leonardo DiCaprio, or Robert De Niro for a quote, even at their own events, without being completely sure they’d rather be anywhere else on Earth.

At other times, the person you get simply depends on the day they’re having. I’ve spoken to Cate Blanchett both when she wasn’t in the mood to be interviewed and also when she was so at ease she complained about her bunion.

Unfortunately, I learned early on with Australian stars that attempting to ingratiate myself as a compatriot wasn’t always a winning strategy. Take it from me that trying to warm up Guy Pearce with an appreciative reference to Mike Young, the teenage heartthrob he played in the 1980s on the Australian soap opera Neighbours, is not the right way to start an interview.

The most reliably professional stars to deal with were the so-called divas. Jennifer Lopez, Beyoncé, Madonna — they’d give you exactly what you needed in a two-minute interview, as long as you behaved yourself and didn’t try any “gotcha” questions.

Mariah Carey was the same. I remember interviewing her after an appearance, when she was wearing a very low-cut top over a push-up bra that could have doubled as a medevac device for large marine mammals. Although she’s only five foot eight, her six-inch platform wedges elevated her bust to just beneath my chin. Her face was caked with thick stage makeup, which crumbled as she spoke and fell in great chunks down the cleft of her bosom, like a glacier calving into the sea.

I maintained an unnatural eye contact with her throughout the interview, since I dared not look down, even at my notebook. Afterward, when I reviewed my notes, they were just illegible loops of handwriting and one pinkish-brown explosion where a chunk of Mariah’s foundation had hit the page like a meteor strike.

Paul Newman enjoyed going out, even near the very end of his life. Once, while we were speaking at a party, a fan came over and asked for an autograph. Slowly and gingerly, he grasped the longneck beer he was holding in his mouth, in order to have both hands free to sign. The actor was very frail, and I was worried the weight of the bottle would pull his teeth out. But he was so graceful, even in that awkward gesture, that his charisma was like being bathed in radiation.

I also had a few enjoyably nutty encounters with Jerry Lewis when he was in his 80s. Whenever he visited New York City, he would stay at the Waldorf-Astoria Towers, luxury apartments adjacent to the famous hotel. I interviewed him there in a room strewn with old publicity images of him with Dean Martin that he was approving for a DVD release of their greatest hits.

Jerry responded best to a tone that was somewhere between respectful and obsequious, and that’s what I gave him. It was important for him to feel like he was being treated as a major figure. The more comfortable he was, the more expansive he became.

When he learned I was Australian, he telephoned a friend who owned a casino in Tasmania — waking him up in what was the middle of the night there — to tell him he was being interviewed by a fellow Aussie. Some of Jerry’s showbiz stories were a little tall, however.

He told me that, in the early 1950s, he had been staying in one of two large penthouse suites at a hotel in Las Vegas. The other, which had an adjoining terrace, was occupied by John F. Kennedy, who then represented Massachusetts in the United States Senate. At the time, Kennedy was framing the book that would become Profiles in Courage, the winner of the 1957 Pulitzer Prize for Biography.

With a serious cast to his brow, Jerry told me the future president asked for his help. He gestured to make sure I understood how close their penthouses really were. They would meet to discuss the themes in the book, he said, and pore over pages.

Jerry chose his words carefully, but there was a sparkle in his eye. The message was clearly that he was too modest to come out and take credit for his work on the book, but a prudent person, on hearing his account, would conclude that he was largely responsible. The modesty itself was suspicious. Some people found Jerry to be a kind man, and others did not, but nobody ever described him as humble.

The authorship of Profiles in Courage is, in fact, contested. It is now generally acknowledged to be the work of Kennedy’s speech-writer, Ted Sorensen. Having heard it straight from the horse’s mouth, however, I know better: the person who deserves credit for Profiles in Courage is Jerry Lewis.

With the column giving me access to some of the biggest names in Hollywood, sometimes I tried to be strategic and develop a relationship with a star. That never worked, not even once.

Around that time, Tom Cruise fired his longtime and fearsomely effective publicist, Pat Kingsley. It was rumored that he blamed her when he did not receive an Academy Award nomination for his film The Last Samurai.

But Pat was generally regarded as the top PR in Hollywood, and she played hardball. If a journalist crossed her on one of her clients, she would block their publication’s access to her entire roster, which included titans like Jodie Foster, Al Pacino, and Will Smith.

Pat had also managed to keep Tom on a leash, shielding some of his crazier antics from popular scrutiny. But after the split, he decided to transfer public relations responsibilities to his sister, Lee Anne De Vette, a fellow congregant in the Church of Scientology.

Suddenly, after years of being muzzled on the subject of his faith, Tom started speaking about it to the press. It was not well received.

Shortly after he changed publicists, I received a tip from a staff member at the Prada store in SoHo. Tom had come in to do some shopping, and as was the protocol for a major star, the store was closed to the public for the duration of his visit. What Miuccia Prada got for the $40 million she spent with the emporium’s architect, Rem Koolhaas, was a wooden halfpipe, leading down from the main entrance on Broadway into the belly of the store, which served both as stairs for the customers and display shelves for the merchandise.

But it was made out of slippery zebrawood, and although the feature looked great, it could be treacherous to navigate. Sure enough, says the staff member who was present that day, Tom slipped at the top and bumped down the stairs on his Oscar-denied behind.

When I called Lee Anne, she asked me not to run the item. Sensing the opportunity to get her on my side as an ally, and salivating at the lifetime of Tom Cruise scoops that would surely follow, I agreed.

Needless to say, I never heard from her again.

Mugrabi Divorce Settled: "She Asked for $100 Million"
Recommended for You
Events
The Frick Museum Celebrates Pride With Drinks and Jazz
Events
This Week in Parties: Hamptons Luncheons and Manhattan Soirées
City Life
Everything to Know About The European Fine Art Fair