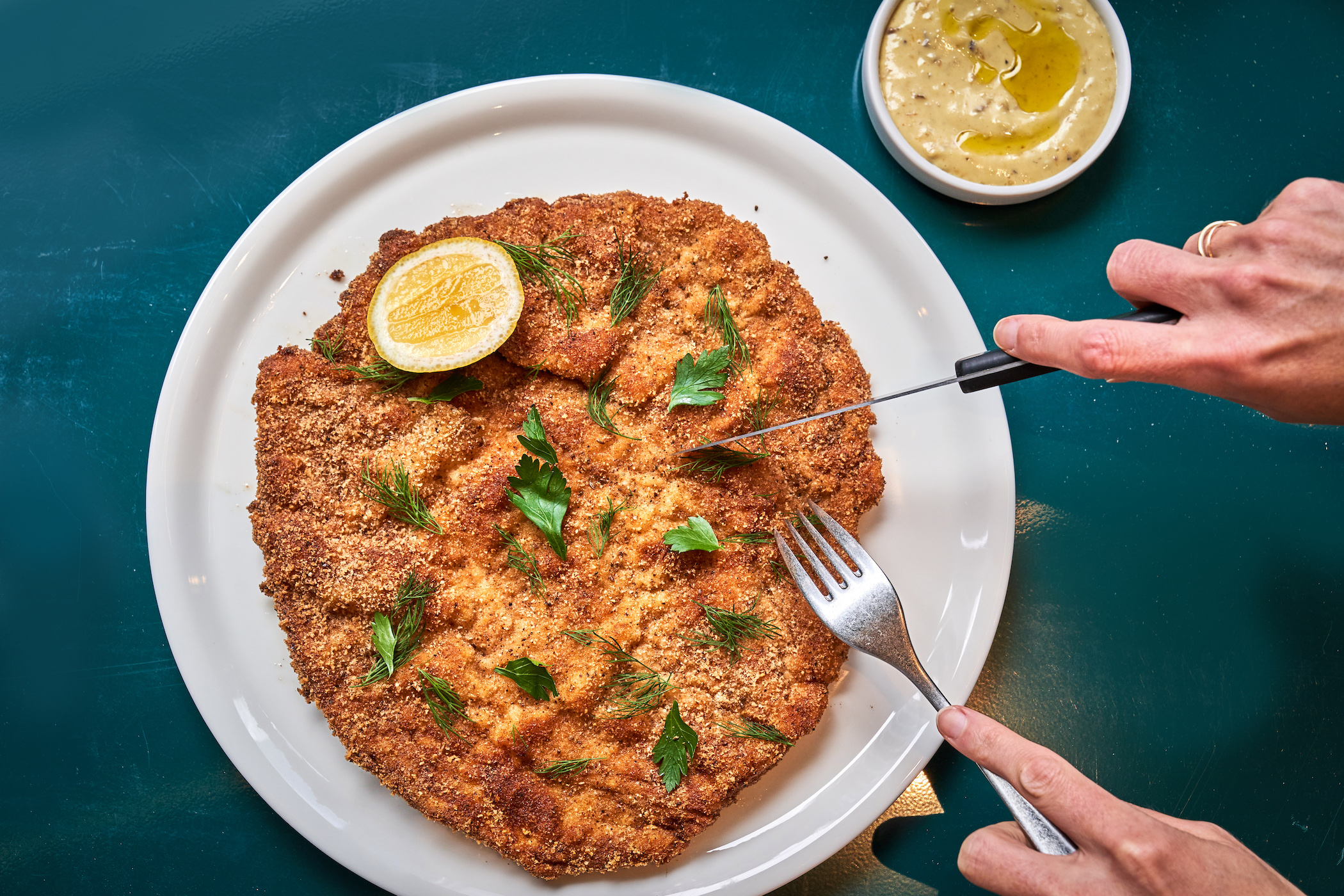 The word “restaurant” comes from the same root as the word “restorative.” When it’s cold, restaurants warm you. When it’s hot, they cool you. When you’re hungry, they feed you. If you’re in a tizzy, a restaurant calms; if you need some excitement, it can titillate.

As much as I’m for restaurants as portals into the unknown and unfamiliar corners of far-off cuisine, I am also sensible to the pleasure of being fed that which you already know you desire. Not every concerto is a Schoenberg. Sometimes it’s a Bach. Sometimes it’s a Bacharach. Not every meal, in other words, need be an exploration. Perhaps sensing this communal need for restoration, many ambitious New York restaurateurs have of late opened new venues devoted to that once derided genre: comfort food.

Sometimes, goddammit, you want a plate of beans to console you in a world gone off the rails.

A plate of beans, more properly shelling beans, is exactly what Hillary Sterling offers at Ci Siamo, a vast restaurant in Hudson Yards, Manhattan’s Far West Side playground. Like chefs Ari Bokovza at Dagon and Bryce Shuman at Sweetbriar, Sterling is a child of Prometheus, cooking before an open fire. Flame, in its myriad forms and uses, dominates the restaurant. Terracotta tiles and glass — both products of flame — glow golden in the soft light. And of course the hearth blazes from a large open kitchen. The contrast between the cold angles and glass panels of Hudson Yards with the Hestian warmth of an Italian home could not be more pronounced.

Sterling’s similarly sterling menu hits the deep profondo notes of home cooking. She vervily swerves into charm; delights in caramelization while leaning into herbs to bring levity. Those beans, those divine beans, are a mixture of large scarlet runner and Tarbais, a few navy, a couple flageolets plus some other (even more) arcane legumes, cooked slowly in cheese rinds, finished with olive oil, fresh rosemary, and sage. Their journey from the hearth wends between tables of well-kempt diners, borne by handsome messengers in starched white jackets, past men in quilted Loro Piana vests and women with Sally Hershberger highlights. They are delivered onto the table at such a gentle slope they verily slide across the burled wood like an air hockey discus.

To me, that’s the singular achievement here at Ci Siamo. A meal here is like running into old friends who have done very well for themselves, except without the attendant feelings of jealousy. One could fill a billion brooks with the wood-fired stuffed whole trout that have swum across New York menus of late, but I have yet to find one stuffed so expertly, to the gills as they say, with delicate pine nuts, raisins, and very bracing mustard greens. Skin crisp, flesh tender, the trout has had a serious glow-up. The same could be said for the pork Milanese, which others might call schnitzel or perhaps just fried pork, except this is mondo Milanese, with the pork pounded so thin it sits tectonically on its platter. Though impossibly svelte under its winter coat of bread crumbs, the meat retains both its flavor and its succulence.

But after one has been succored, it’s back into the windswept Mad Max expanse of Hudson Yards. There is no salve for the juxtaposition; not even the lingering flavor of dark chocolate and blood orange sorbetto can save the shock. If that transition is too abrupt a change, might I suggest Hancock St., found on a quaint corner of the West Village. (For those with an institutional memory, the space was once El Toro Blanco and before that Leyla Marchetto’s Scuderia, the last gasp of the Marchetto clan who once ruled the block.)

This particular stretch of Sixth Avenue has wide sidewalks and thus is perfect for boulevardiers, flaneurs, and those who regard visits to restaurants as people watching with snacks. But as I squeeze through the crowd, with their scarves and tans and rings and hats and pets and bags and all the accoutrements of what it means to be bobo in SoHo in 2022, my eyes naturally turn to the tables, where there is more delight to be had.

John McDonald, the man behind the restaurant, has been feeding this cohort for ages. At places like Lure Fishbar, Bowery Meat Company, and Bistrot Leo, he’s perfected an approach to food that is as a consigliere to a prince: gentle, supportive, and deferential. But, like a consigliere’s advice, the offerings are skillfully wrought and delivered. Veal schnitzel — Sterling might call it Milanese — is basically an edible pat on the back with enough lemon-caper brown butter to sop up with a side of fresh sourdough. Salads burst forth in pastel glory, including a Gem lettuce and avocado offering, which combines two salad trends. Beef tartare benefits from a splash of colatura vinaigrette — a Sicilian fish sauce — and a silky spicy tofu sauce.

But the pièce de résistance at Hancock St. is the braised short rib, whose bone extends skyward like a Calatrava cantilever. Braised for 12 hours with Montreal spices, the meat falls from the bone with a sigh. In fact, everything here seems calculated for minimal effort. One of the most popular pastas I see is called the Adult Kid’s Pasta, consisting of lumache (snail) shells, two-year-aged Parmesan, and butter. On the one hand, I tried it and was immediately transported to my childhood. Or, should I say, I was immediately transported to an idealized version of my childhood in which my mother made extraordinarily good, artisanally extruded pasta with just the right angularity of Parmesan and a generous portion of house cultured butter. On the other hand, this is also perhaps the danger of comfort food, no matter how well wrought it is: that it makes children of us all. Yet, even I, gimlet of eye and long of tooth, can only hold out so long before I slip, like a lotus-eater, into the lap of pleasure and fork another cheesy noodle into my mouth.