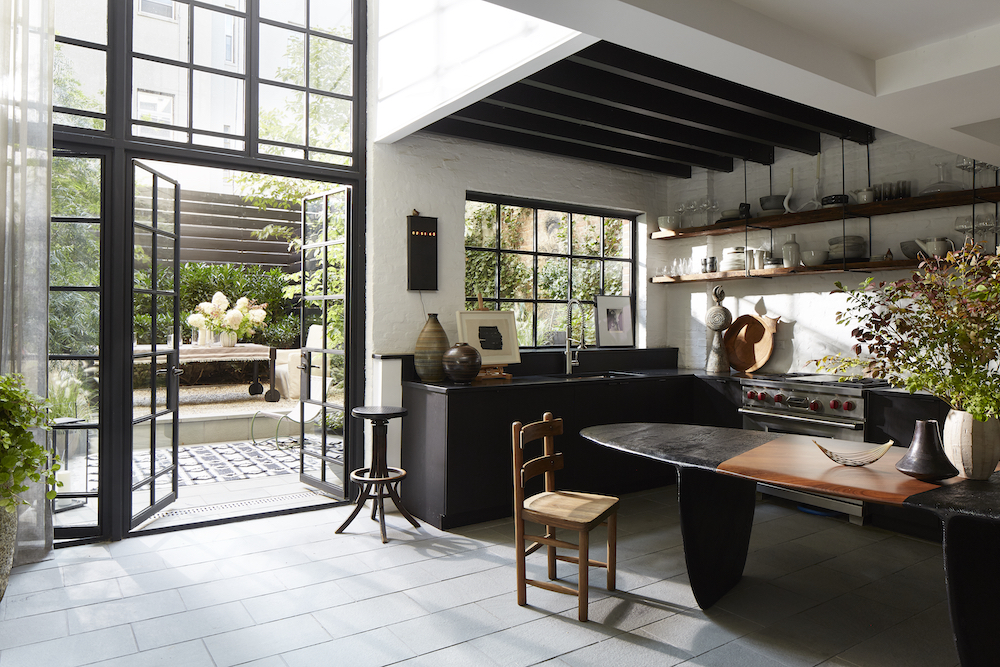 The Designer A-List: a Short Guide to the Best Names in Interiors
Living

The Designer A-List: a Short Guide to the Best Names in Interiors

Who are the most decorated interior designers currently working in New York, and beyond? Avenue rounds up a short list of our favorites.

While perhaps better known stateside for his furniture designs priced in the five figures, Italian architect and designer Achille Salvagni has been quietly cultivating a clientele of predominantly real estate and finance types in New York City. Current projects for the Rome-based designer include landmark townhomes on opposite sides of the island, where he’s designing everything from the architecture to interiors and furniture; Salvagni has also been tapped for several residential developments, and is currently working as the interior designer of record for a new NYC building by Robert A.M. Stern.

Jamie Drake, who has created vibrant interiors for Michael Bloomberg and Madonna, among others, made Caleb Anderson a partner in his then eponymous firm six years ago. Since then, the duo has continued create glamorous living spaces for an uber-discreet client list — royals, Bobby Axelrod types, and the like — who favor penthouses on Billionaires’ Row. Mere mortals can approximate the lifestyle via Drake’s line of furniture for Theodore Alexander.

A former fashion model who serendipitously sashayed into interior design and, later, art consulting, Fuller creates full-glam interiors for boldfaced names on both coasts, and around the world. Current projects include homes for Questlove, photographer (and BFF) Steven Klein, financier Gregg Rechler, and Beyond Yoga cofounder Jodi Guber Brufsky (daughter of Peter Guber). A collection of performance fabrics is in the works with Perennials; a hand-painted silk wallpaper collection with Fromental recently debuted, as did her latest designs for the Rug Company.

The Chicago native spent decades in fashion design before taking on her first interior design commission just over twenty years ago. Today Hillman, whose father (the photographer Don Bronstein) shot Barbra Streisand for her People album cover, is renowned for her quietly opulent interiors for a select group of very discreet clients who are passionate about collecting works of art and demand significant design.

In just under a decade Christine and John Gachot have become the go-to designers for successful millennial financial, real estate, and tech entrepreneurs on both coasts. While they’ve been celebrated for their work on commercial spaces, most notably the Shinola Hotel in Detroit, the duo’s residential client list includes Marc Jacobs, Charlotte Ronson, and Kith owner Sam Fieg.

It all started with Elton John, one of Gibson’s first clients as a then fledgling designer based in Atlanta. But the hitmakers kept on coming: now totaling five houses for John Mellencamp and six for Jon Bon Jovi (along with other notable people she works with, including Meg Ryan and Jon Stewart). Not all her clients are household names, however; she admits there are “a lot of philanthropists” as well as artists, filmmakers, tech types, and even a politician or two.

This Michigan native started his career as a set designer on Steve Harvey’s daytime TV talk show and has since developed a roster of high-profile clients, becoming a bit of a celebrity himself. Welch is a contributor and on-camera talent for Drew Barrymore’s new talk show as well as Access Daily, and was tapped to design the family room in the Kip’s Bay Decorator Show House in Palm Beach this spring. His furniture line debuted last year and his now available on Houzz.com.

Founded five years ago by Vicky Charles (former global head of design at Soho house) and Julia Corden (wife of The Late Show host, James Corden), Charles & Co. enjoys an A-list clientele at odds with their relatively low profile. Charles is based in New York City, while Corden holds down the West Coast fort in Los Angeles, but their very private project roster is decidedly global. Their high-profile clients include Amal and George Clooney, Victoria and David Beckham, Mila Kunis and Ashton Kutcher, and (rumor has it) Meghan Markle and Prince Harry.

Since the daughter of the legendary decorator (and best-dressed list regular) Mark Hampton took over her father’s firm more than 20 years ago, she has expanded its global reach, published several books, secured a host of licensing agreements, and even earned two honorary doctorate degrees. The self-described “secret formal person” in terms of decorating style, Hampton will introduce new bedding and outdoor furniture this year, while continuing to produce 52 Weeks of Design, a weekly interview series.

Undeniably one of the reigning doyennes New York interior design, Moss has 35 years of experience under her stylish belt, and is a go-to decorator for many Upper East Siders who might also have homes in Bel-Air, Aspen, or Palm Springs. She is the author of 11 books (the most recent, Charlotte Moss Flowers, came out in April) and creator of countless product lines: her newest is a collection of vases made in collaboration with her stepson, the glass artist James Friedberg.

Ellie Cullman founded Cullman & Kravis 35 years ago with her late partner, Heidi Kravis. Cullman, a Brooklyn native, was already New York royalty of sorts, as her family owns the Peter Luger steak house (est. 1887). Her interiors tend toward the colorfully elegant and often over-the-top opulent, designed for captains of industry and, now, their children as well. Current projects include a more than 40,000-square-foot estate in New Jersey, waterfront homes in the Hamptons, Greenwich, and Palm Beach, and a New York City townhouse. The firm’s fourth book, due out in 2023, will feature these projects and more.

Twenty-two years as an “apprentice” at Parish-Hadley, followed by more than 30 years helming her own firm, have more than secured Bunny Williams’s status as a living legend. She’s known for classic, restrained interiors, her love of gardening, and ahead-of-the-curve entrepreneurial pursuits, including the much-loved store Treillage, which she opened with her husband, the antiques dealer John Rosselli, in 1991 (and which closed in 2015). Today, the Bunny Williams Home collection includes furniture and accessories; a new documentary, Bunny Williams: Not a House but a Home, debuted on PBS in April.

A former partner in the legendary design firm Parish-Hadley, McCarthy crafts textural, richly layered interiors rooted in European design traditions for the likes of former ambassador (and Getty Museum patron) Robert Tuttle, as well as a host of private equity and real estate clients, in addition to a Hollywood star and an oligarch or two.

This interior designer, who trained as an architect, continues to attract (as one friend put it) a “torrentially wealthy” finance clientele for projects like the much buzzed-about 22,000-square-foot public-building-turned-private-home (complete with subterranean swimming pool) he completed last year in the West Village. Among his current jobs are homes in Westchester, the Hamptons, and Greenwich, Connecticut; he is also making additions to his custom lighting collection for Urban Electric.

Specializing in breezy, spirited-yet-sophisticated spaces with strategic splashes of color, this Palm Beach native’s residential client list is a who’s-who of the young and fabulous. Kemble has designed collections of fabrics, wall coverings, rugs, tiles, and outdoor furniture, and her third book, Island Whimsy (Rizzoli), documenting the design of Playa Grande Beach Club, a resort on the North Coast of the Dominican Republic, debuted in April.

A darling of the San Francisco social set, Fulk opened a TriBeCa studio six years ago to better serve his growing East Coast clientele, and as a location for the dapper designer and event planner’s legendary parties. This year will bring a lighting line for Urban Electric, fabrics and wall coverings with Pierre Frey, and, in 2022, a collection for the Rug Company.

Victoria Hagan is a lot like her interiors: quietly elegant, and never seeking the spotlight. Like many others on this list, she has recently seen an uptick in Palm Beach clients and is opening an office there this year, as well as finishing up her third book with Rizzoli and a new building on Madison Avenue.

The architect Lee Mindel’s so-called “extravagantly minimal” style is evident in his own history of homes — lofty spaces with important pieces of furniture and, increasingly, art. A Fellow of American Institute of Architects, a member of the Design Miami/ vetting committee, and a recipient of the Cooper Hewitt National Design Award, Mindel describes his interiors clients — who have included Sting and Trudie Styler and various members of the Soros and Lauder families — as “social, scientific, and artistic contributors to the world.” He has also designed collection of furniture for Design Within Reach and Knoll, fixtures for Waterworks, and rugs for V’Soske.

The architect of choice for the art crowd (she’s designed buildings for heavy hitters Hauser & Wirth, David Zwirner, and the Rubells, and is working on an expansion of the Frick) is often tapped by gallerists, collectors, and artists for interior design as well. Clients include David Maupin (of the Lehmann Maupin gallery) and his husband, the stylist and editor Stefano Tonchi, as well as Gordon VeneKlasen (co-owner of the Michael Werner gallery). She continues to oversee and design for Vica, a collection of furniture, lighting and hardware originally founded by her grandmother.

Moyler studied architecture but discovered a love for interiors while working at Skidmore Owings & Merrill; positions at John Saladino and Thierry Despont followed. Prior to founding her eponymous firm in 2011, she led the domestic interior design group at Giorgio Armani/Armani Casa. Yet even with a client list that includes David Geffen, Leonardo DiCaprio, Pia Getty, and Thomas Keller, Moyler has managed to keep a discreet profile. That will undoubtedly change with a new column for Veranda, her Instagram live show “High Tea with Joy: Brew it. Pour it. Spill it,” and a tabletop collection launching this year.

A onetime vice president of production for Universal Studios, Hughes seems to have seamlessly segued into designing interiors for pals including Andy Cohen and Sarah Jessica Parker and Matthew Broderick, whose new West Village abode he is currently finishing. Hughes, who lives in Malibu with partner and Million Dollar Decorator star Nathan Turner, has offices in Los Angeles and New York City, where current projects include an apartment in Little Italy’s landmark Police Building.

Founded more than 30 years ago by British-born Andrew Sheinman, Pembrooke & Ives is now just as likely to convert buildings for developers (most notably 212 Fifth Avenue) as it is to create interiors for their predominantly real estate and finance, often multigenerational clientele. Current projects include a double-wide Upper East Side townhome (former location of a Kip’s Bay showhouse) and a 30,000-square-foot oceanfront home in Palm Beach.

Founded by Joe Nahem and the late Tom Fox 30 years ago, Fox Nahem has, over the decades, built a clientele ranging from Hollywood royalty (Robert Downey Jr.), to gallerists (Per Skarstedt), to finance and Silicon Valley tech types with big budgets and art collections to match. The firm, which has offices in New York City and the Hamptons, is currently working on several projects in Miami, including one in the Continuum building, as well as the interiors of an Amagansett waterfront home (designed by Blaze Makoid) owned by prominent art collectors.

Despite a global clientele that includes the likes of art dealer Thaddaeus Ropac and financier Nathaniel Rothschild, Zervudachi remains one of the most prominent designers whom many have never heard of. He was discovered at the precocious age of 19 by the acclaimed British interior designer David Mlinaric (whose clients included Mick Jagger), became a partner in the firm in 1987, and bought it outright in 2005. While residential interiors (other than his own homes) are rarely published, he has designed British embassies in Washington and Paris, and done projects for London’s National Gallery, National Portrait Gallery, and Royal Opera House. Today, the firm has offices in London, Paris, and New York.