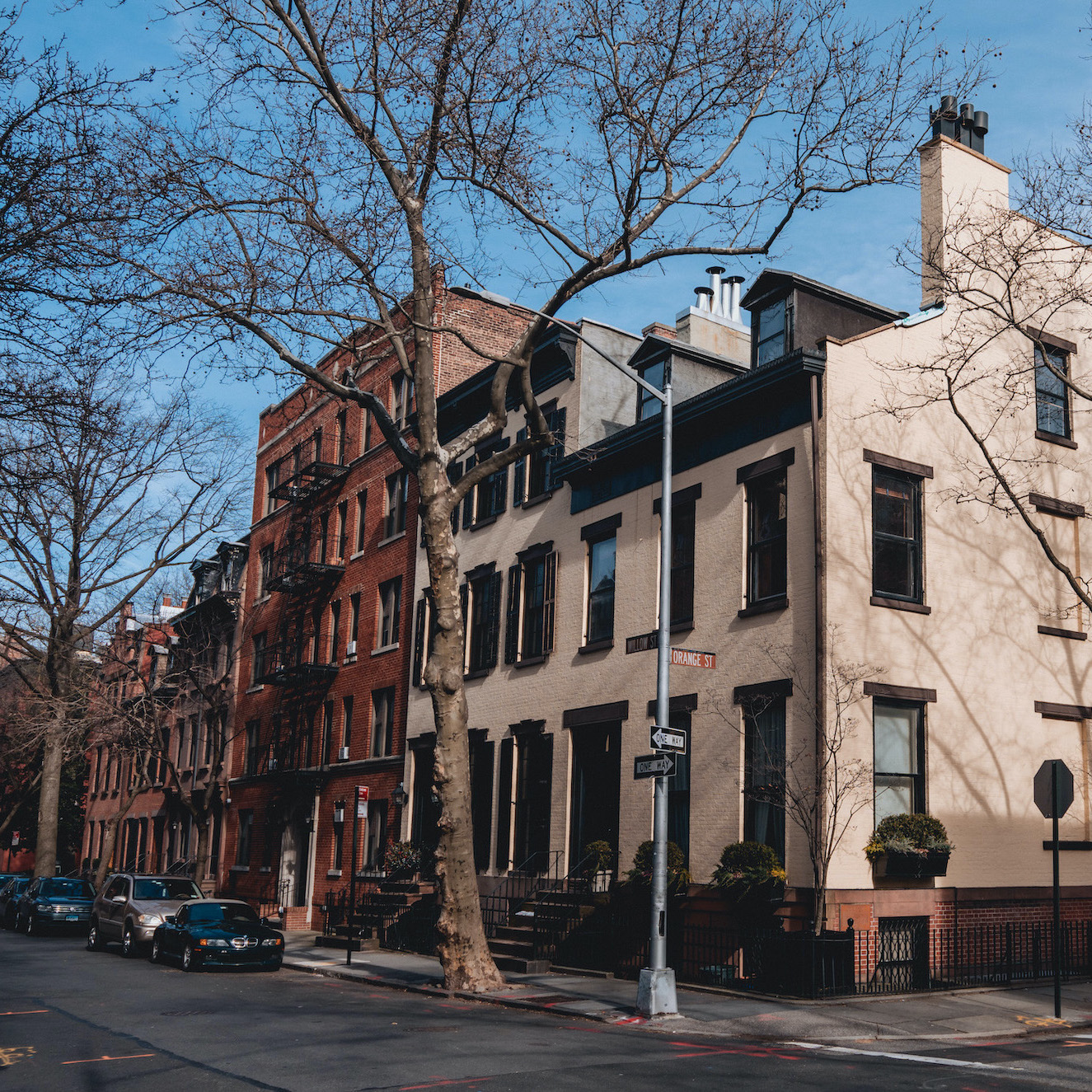 Residents in the bucolic neighborhood have created a village in the heart of the city.
By Heather Hodson
Photo by Zihao Ling

“I lived in Manhattan in the ’70s, and Brooklyn was another planet,” says Dirk Wittenborn, the novelist, screenwriter, and downtown habitué turned Brooklyn Heights resident. But even back then, Wittenborn caught a glimpse of the future. “I remember driving to an exhibition at the Brooklyn Museum in 1976 with David Hockney and the art czar Henry Geldzahler. David said, ‘If this was Paris, everyone would live here.’ It stayed in my head.” Two decades later, Wittenborn made the migration across the river, moving into a brownstone in the Heights at the suggestion of his German-born wife, Kirsten, who, like Hockney, saw the neighborhood through the eyes of a European. “It reminded her of Holland, with the water and some of the architecture.” They arrived in 2002, some 13 months after their daughter Lila was born. “I remember walking down Remsen Street and seeing the river and the ferry and thinking, this is magical.”

For Laura Trevelyan, the BBC anchor and correspondent, it was an English, pastoral quality that made her fall in love with the Heights when she arrived 16 years ago. “Living here is like being in a village in the middle of the city,” says Trevelyan, who lives with her husband, a television executive, and their three sons on a leafy block of brownstones. “I see at least ten people I know when I’m doing my groceries. I’ve got my church, the boys’ school, my local restaurant. I know everybody’s name — Sammy at the pet shop, Jimmy at the cobbler’s. It has that same feel of the Wiltshire village where my grandparents lived.”

In aspect and design, Brooklyn Heights is the opposite of high-rise New York in that it is human in scale. The writer Thomas Wolfe, who, in the ’30s, lived at 111 Columbia Heights, when the area was a haven for beatniks and writers, called it “a fine town… a long way from New York.” The Heights evokes a sense of a bucolic past rubbing up against the present with its 19th-century mansions and shingle-wood Colonials, streets with names like Garden Place, Grae Court, and Willow Place, and a profusion of cherry trees that burst into riotous blossom every spring. As Truman Capote said of this time-bending quality in A House on the Heights, written when living in the basement apartment of his friend Oliver Smith’s Greek Revival townhouse on Willow Street, the homes here “invoke specters of bearded seafaring fathers and bonneted stay-at-home wives… For a century or so that is how it must have been: a time of tree-shrouded streets, lanes limp with willow, August gardens brimming with bumblebees and herbaceous scent, of ship horns on the river…”

One of the great boons for successive generations of families living in Brooklyn Heights has been the ability of their children to walk to a range of impressive schools in the neighborhood. The choice includes the über progressive Saint Ann’s, founded in 1965 by Stanley Bosworth and whose alumni include Stella Schnabel and Lena Dunham; Packer Collegiate, established in 1845 as a girls’ school and coed since 1972; PS8 in the North Heights; Mary McDowell Friends School on Sidney Place; Brooklyn Friends School just a few blocks outside the neighborhood; and the oldest preschool in Brooklyn, Grace Church School. “There are six children on our street who walk to school — that’s the charm of it,” Wittenborn says. The emerging problem here is a familiar one to storied neighborhoods: it is becoming increasingly difficult for residents to get their children into these schools, given the rash of residential buildings going up just beyond its borders. As Wittenborn tells it, they were the lucky ones: “We arrived just before midnight, in what then happened to Brooklyn.”

“Midnight” in Brooklyn is a subject of much discussion among longtime Heights residents, who recall that back in the ’70s and ’80s, New Yorkers considered the neighborhood to be a cultural hinterland inhabited by old ladies, law professors, and anyone who couldn’t afford Manhattan rents. People didn’t visit unless by mistake, at which point they hightailed it right back to Manhattan. Near its perimeter — this was the era of the citywide crack epidemic — it was a no-go zone. “I remember threats from my parents that I would be spanked if I crossed Atlantic Avenue,” recalls Elizabeth Ruggie, a real estate agent for Compass who grew up in the Heights and is now raising her children there. “We lived on Willow Place, and at night drunken sailors walking up from the waterfront would throw beer bottles at the side of our house.” Another resident, Donald Brennan, owner of the real estate brokerage Engel & Völkers Brownstone Brooklyn, says: “In the ’80s the neighborhood’s Brooklyn Heights Association [BHA] was still driving a volunteer-manned security car and doing night surveillance of the neighborhood looking out for burglary and vandalism.”

But then, in what seemed like the blink of an eye, Brooklyn Heights was ‘discovered.’ What started out in the ’90s and early aughts as a trickle of young professionals arriving from Manhattan with dreams of brownstone living turned into a stream and then a tidal wave. Property prices doubled, and tripled. A benchmark of sorts was reached in 2012, when 70 Willow Street — Truman Capote’s old haunt — was bought by Dan Houser, the co-founder of Rockstar Games, for $12.5 million, setting a record for the neighborhood. Then, once their children had won coveted spots at neighborhood schools, the entertainment set moved in. Jennifer Connelly — herself a Saint Ann’s alumna — and Paul Bettany bought a five-story Greek Revival mansion on the neighborhood’s premier block, Columbia Heights, for $15.5 million. Matt Damon and his wife purchased the penthouse in The Standish, the newly converted Watchtower on Columbia Heights, for $16.6 million (their new neighbors include Emily Blunt and John Krasinski). Just three months ago, another townhouse in the Heights was sold for five digits, this time to Michelle Williams and her husband, Hamilton director Tommy Kail. “It all happened so fast,” says Wittenborn. “When I first moved here an artist friend said, ‘For me to go to Brooklyn, it would be like moving to Philadelphia.’ He’s out by Gowanus now.”

Perhaps the question isn’t why it happened so fast, but what took it so long? Brooklyn Heights has always benefited from its natural topography. Thomas J. Campanella details much of it within the pages of Brooklyn: The Once and Future City, the best historical book written about the borough. Campanella spent ten years researching and writing the opus and observed that Brooklyn was once, in geological parlance, a terminal moraine, a souvenir left by the miles-deep Laurentide ice sheet in the wake of the last Ice Age. “The backbone of the heap… is Walt Whitman’s ‘Brooklyn of ample hills,’ a line of elevated ground which included… Brooklyn Heights… Hence its name.” From the 1630s, Brooklyn was open farmland, but as New York grew and became urbanized, so did its next door neighbor. By the 1820s, investors were buying lots in the Heights, drawn by the proximity to downtown Manhattan by ferry. Row houses were built here, as were such churches as the famed Congregational Plymouth Church, the seat of the Underground Railroad while under the ministry of the abolitionist Henry Ward Beecher and his sister Harriet Beecher Stowe, author of Uncle Tom’s Cabin. An elegant neighborhood of 19th-century architecture sprang up along Hicks and Henry and the Fruit Streets (Orange, Pineapple, Cranberry), from gray-shingled cottages to red-brick carriage houses. A later wave of building brought the 25-foot- wide brownstone mansions, with gracious stoops, Greek Revival columns, and 12-foot high ceilings.

In the early 20th century, the neighborhood experienced an extended decline, and many of the four- and five-story mansions once owned by individual families were converted into boarding houses or apartments. The era of cheap rent had arrived, and with it came the bohemians: artists, writers, and exiles largely from Europe. Henry Miller lived at 91 Remsen Street with his second wife, June, until they were evicted for failing to pay the rent. Arthur Miller moved into a seven-room apartment in the center of the Heights at 62 Montague Street with his wife Mary Slattery, and her roommates. (The young poet W.H. Auden was just around the corner at 1 Montague Terrace.) After a stint living at 102 Pierrepont Street, Miller would buy the imposing brownstone 31 Grace Court, writing Death of a Salesman there before selling it to the author and civil rights activist W.E.B. Du Bois and his wife, the author and playwright Shirley Graham Du Bois.

But perhaps the most renowned house of Brooklyn Bohemia was 7 Middagh Street, a creative commune dreamed up by the literary editor George Davis, and home in the 1930s and early ’40s to a rotating group of artists, writers, and composers, including Aaron Copland and Leonard Bernstein, and the actress and burlesque entertainer Gypsy Rose Lee. The young Carson McCullers lived here just after publishing The Heart Is a Lonely Hunter, as did Auden before he left for Montague Terrace. Salvador Dalí and his wife, Gala, were among the inhabitants and guests, as were Benjamin Britten and his lover, the tenor Peter Pears. The writer James Stern dropped by one day to discover, as he described it to the biographer of Auden, “George [Davis] naked at the piano with a cigarette in his mouth, Carson on the floor with a half a gallon of sherry, and Wystan [W.H. Auden] bursting in like a headmaster, announcing: ‘Now then, dinner!’” And so it continued, until 1945, when the house was razed to the ground to make way for the great scar of a highway that was Robert Moses’s Brooklyn Queens Expressway (BQE).

The fact that the BQE didn’t demolish more historic buildings comes down to the unique efforts of generations of Brooklyn Heights residents. In the 1930s, residents and civic activists successfully lobbied for a grand public promenade to be cantilevered over the proposed highway that was threatening to obliterate their neighborhood. Decades later they lobbied for the area to be protected by the Landmarks Preservation Law. In 1965, Brooklyn Heights became the first neighborhood in the city to receive such a designation. “The area almost in its entirety by name was protected, with the zoning overlay for landmarks protection,” explains Brennan. “In addition to that, the views of New York Harbor, Lower Manhattan, and the Brooklyn Bridge, to some degree, are protected by the ‘Brooklyn Heights Scenic View District’ as stipulated in the New York City Zoning Resolution.” He adds: “The BHA has been an unseen force that has helped protect and maintain an exceptional quality of life.” The BHA still has its hands full. Most recently, the neighborhood has had to fend off the city’s plans to replace the landmarked Promenade with a six-lane highway whilst a 1.5-mile segment of the BQE along the western Brooklyn waterfront is rebuilt, which will take at least five years. The plans brought out a level of local activism not seen since the days of Moses and his quality-of-life obliterating masterplan.

Among the mansions that occupy Columbia Heights are surely some of the most beautiful townhomes in New York. These are houses, after all, with soaring interiors largely unaltered from when they were built in the 1820s, and which have almost panoramic views sweeping from Lower Manhattan across the Bay to Governor’s Island, the Statue of Liberty, and out to the horizon.

Brooklyn Heights may be next door to the most urban metropolis in the world, yet it gives the impression of what the ancient Romans called a rus in urbe: a touch of the countryside in the heart of the city. As Dirk Wittenborn tells it, “Here you bump into friends in the street. You see the next generation coming in. When I’m being a cynic, I think Brooklyn Heights is a ghetto of good intention. But the more optimistic part of me sees it as an oasis.”