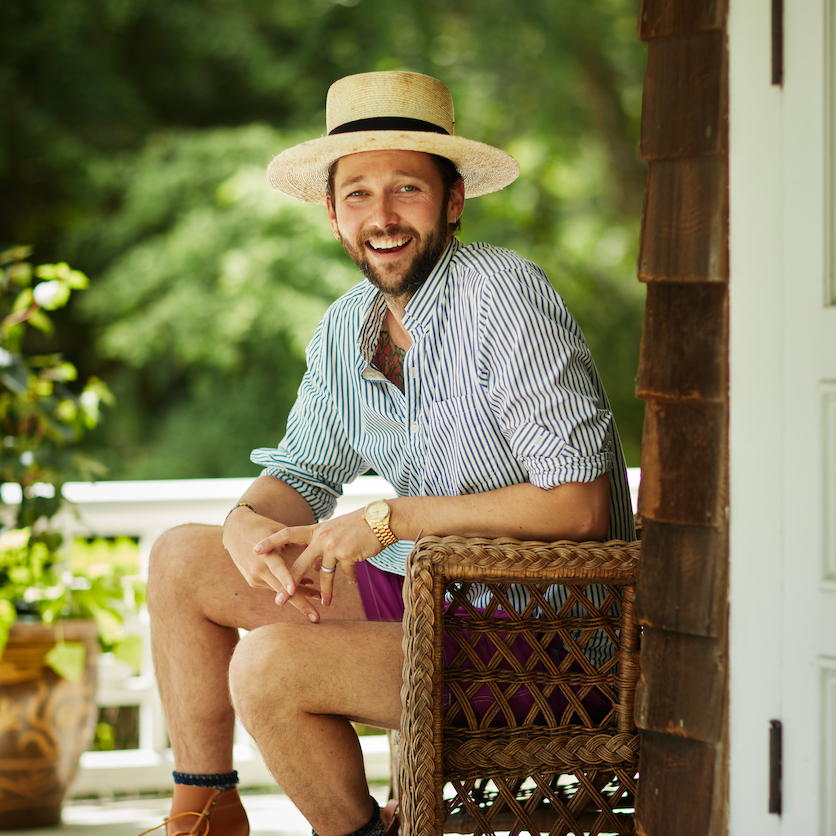 “It’s like a full-time assault at every corner,” the fashion designer Chris Benz observes wryly, waving at a thicket of bamboo stand-ing 18 feet high in his rambling Bellport garden.

“That is one of the blessings of working from home,” he continues, peering into an enormous flower bed of lavender, seagrasses, and French hollyhocks. “At six pm you can immediately go to weeding, which is usually the case. It’s very therapeutic, mindless weeding.”

It is a beautiful June day, and the 36-year-old Benz is dressed in his go-to gardening uniform of cotton button-down shirt, J.Crew swimming trunks, L.L. Bean duck boots, and men’s straw boater.

Like many New Yorkers who are now hunkered down at their weekend retreats to ride out the coronavirus, Benz, who is head of women’s design and CrewCuts at J.Crew (which filed for bankruptcy protection in May, in a move the company hopes will facilitate long-term growth), has spent the past three months living here with his partner, Peter Toumbekis (a lawyer), and his boxer, Rudy.

The family exemplifies a new passion for homesteading, brought about in part by a pandemic that has driven many from their city homes. For this new generation of homesteaders, work-life balance means remotely managing a team who may be spread all around the country or the world, and then feeding the livestock. Benz spends his days juggling Zoom meetings with dashing to the local nursery, cultivating the cutting beds, feeding his rare-breed chickens, and tending his newly planted edible garden.

In early 2018, the designer bought the Victorian shingle-styled house and its three acres of garden, where an artists’ colony atmosphere still prevails. Jazz music drifts across an expanse of lawn from the large covered porch, which is Benz’s favorite spot on the property, with its vintage wicker furniture and sight line across a parterre to a pool framed by an allée of hornbeams.

Hedges of boxwood snake through the grounds, a swing hangs from the branch of a large oak, a treehouse by the local artist Pete Nelson is hidden in a corner, and everywhere there are blooms of irises, rhododendron and climbing hydrangea, as well as thatches of seagrasses.

“It really is a dream property,” he says. “It’s very, very beautiful.” Like all romantic houses, he tells me, it has a storied past. “As legend has it, in the ’80s they would have quite flamboyant drag performances on the top floor of the house,” he says, referring to the two gentlemen who owned the house in that period. “They had a big curtain that went across the room. When guests would come to stay, they’d have performances, which is such good lore — a murky history!”

He flashes a smile. “I could revive it, I suppose.”

When Benz came across the house almost three years ago, it had been languishing on the market for some time, the yew hedges and mature trees growing increasingly out of control. “It was three acres of all-encompassing, old-growth everything,” Benz recalls.

His first rookie mistake was to under-estimate the grass. “I thought I could, like, mow all the lawns every Saturday morning, so I got a riding lawn mower and all these things. You know that movie Funny Farm with Chevy Chase? I did all of those things when you move from the city and go, ‘Hmm, I can do that.’ Meanwhile, you spend an entire weekend mowing the lawn and at the end you are totally wiped out.”

He ordered plans off Etsy for a chicken coop then customized it, and ordered heritage hens online from My Pet Chicken, choosing them according to their color of egg. A box of live chicks arrived by US mail. But chickens, he discovered have personalities.

The Cream Legbar was skittish, the Golden Cuckoo Marans was feisty, and “one had to go and live down the street at a new coop because the others decided they didn’t like her anymore and would attack her,” he says. “She was the biggest, mopiest one. She laid blue eggs and the hens got jealous of her blue eggs and would sit on them.” He pauses. “Chickens are weird.”

Benz says that his adventure in homesteading have been influenced by memories of a rural childhood in the Pacific Northwest.

“I grew up in Bainbridge in Seattle and have this very pastoral idea of old houses,” he explains. “My grandparents had a very old farmhouse down the street from me, and while both my parents worked I spent loads of time there as a child. It was a whaling captain’s house, red, with a white picket fence, quite similar to this.” He remembers organizing planters with his grandmother every spring.

“I’d do that with her, and it was a special thing. There are pictures of me with my grandfather, planting a raised bed vegetable garden.” Bellport, he says, was “always in my periphery.”

One of his oldest friends is the model, food writer, and founder of the blog Impatient Foodie Elettra Wiedemann, whom he has known since the early aughts in New York, he says, “when we were teenagers in fashion.” Her mother, the actress, conservationist, and organic farmer Isabella Rossellini, bought a working farm in Bellport a decade ago.

Wiedemann now oversees that farm, having moved there permanently with her toddler son. “Having a farm is a totally different thing,” Benz says admiringly. “I’m completely overwhelmed by having a small garden.”

Bellport friends now include many of the New York artists and writers who have migrated to the coastal hamlet over the years, including Howie Guja and his wife, Jenna, and the artist and writer Hugo Guinness and his wife, the painter Elliot Puckette.

“It’s such an amazing community of New Yorkers.”

Taking on the Bellport property happened to coincide with his new job at J.Crew, but the challenge hasn’t fazed Benz, who is currently working on the company’s Spring/Summer 2021 line.

“I’ve always done renovation projects in tandem with a job in fashion,” he explains. “There is a synthesis there, it really does use the same levers.”

During his previous fashion tenure, as creative director at Bill Blass, he renovated his townhouse in Brooklyn’s Bedford-Stuyvesant neighborhood, using his singular eye to create an eclectic, romantic charm.

“Similar to fashion, you want to be as true to the architecture of the brand or the space that you’re working with as much as possible. So even plantings have been with the end goal of making it appear as though it’s always been that way.”

The bones of the Bellport garden were good, parts of which were laid out in the symmetrical patterns of a French formal garden and emphasized sight lines. “There was a framework that was amazing,” he says, but his instinct was to create a more natural look, avoiding what he calls “the persnickety.”

“There was a lot of formality to the property that can go weirdly European, and I feel Bellport and the East End of Long Island are such casual places. It was about bringing in elements that would add to the casualness.”

He planted a bunch of irises close to the house because, he says, “They feel very Long Island. [It’s about] taking away some of the geometry by putting things up against the more structured things.”

Similarly, the pool area, which he suspects was modeled on David Hicks’s stone-lined pool at The Grove in Oxfordshire, felt too stylized, with its hornbeams pruned into cylindrical blocks of leaves. Benz let the lily of the valley and Japanese maples run riot at the back, planted areas with hostas, and left the hedges alone.

“It just feels a little more casual, and I think that’s how it should be.”

Casual is a constant theme. Benz’s planting philosophy seems to be, see if it grows. “It’s very trial by fire. You just have to do it and then see what’s happening,” he says. “My hack with gardens is, find things that don’t take a lot of attention and just keep coming back again and again.”

He points out a tricolor willow — “If you need to fill space, these grow like weeds” — and the various thatches of seagrasses, including wormwood, soft meadow, and false indigo, he planted for their ability to fill in gaps and give an unfussy, natural look. Parts of the garden he has simply left wild. But if Benz’s signature aesthetic is casual, almost haphazard, there is a subtle interplay with nature, and his celebrated eye for color is in evidence everywhere.

Herbaceous borders bloom with rhododendrons, ajuga, cream false indigo, irises, peonies, daisies, French hollyhocks, and lavender, in variegated shades of purple. It is a scene that feels enchanted, both untraditional and of a bygone era, like a modern-day Howards End.

Like so many New Yorkers who have been holed up in their weekend homes this year, Benz has embraced his country lifestyle. This is the first summer he has cultivated an edible garden, and with typical style, he has turned the parterre into a vegetable, herb, and cutting garden, planting zucchini, peas, and eggplant among the peonies and sage. He has started riding lessons at the local horse farm.

“It’s just me and little girls,” he laughs. He adores his chickens (“they’re hilarious,”) which now have an all-access pass to the property, including the porch, where they sometimes sit on his lap while he works. “My dream of dreams would be to have goats and sheep wandering around, but chickens take up plenty of time,” Benz says. He considered keeping bees for about a minute, but then decided there are limits to his homesteading aspirations.

“It’s a whole different type of husbandry,” he laughs. “At the end of the day, I don’t really want to be keeping bugs.”