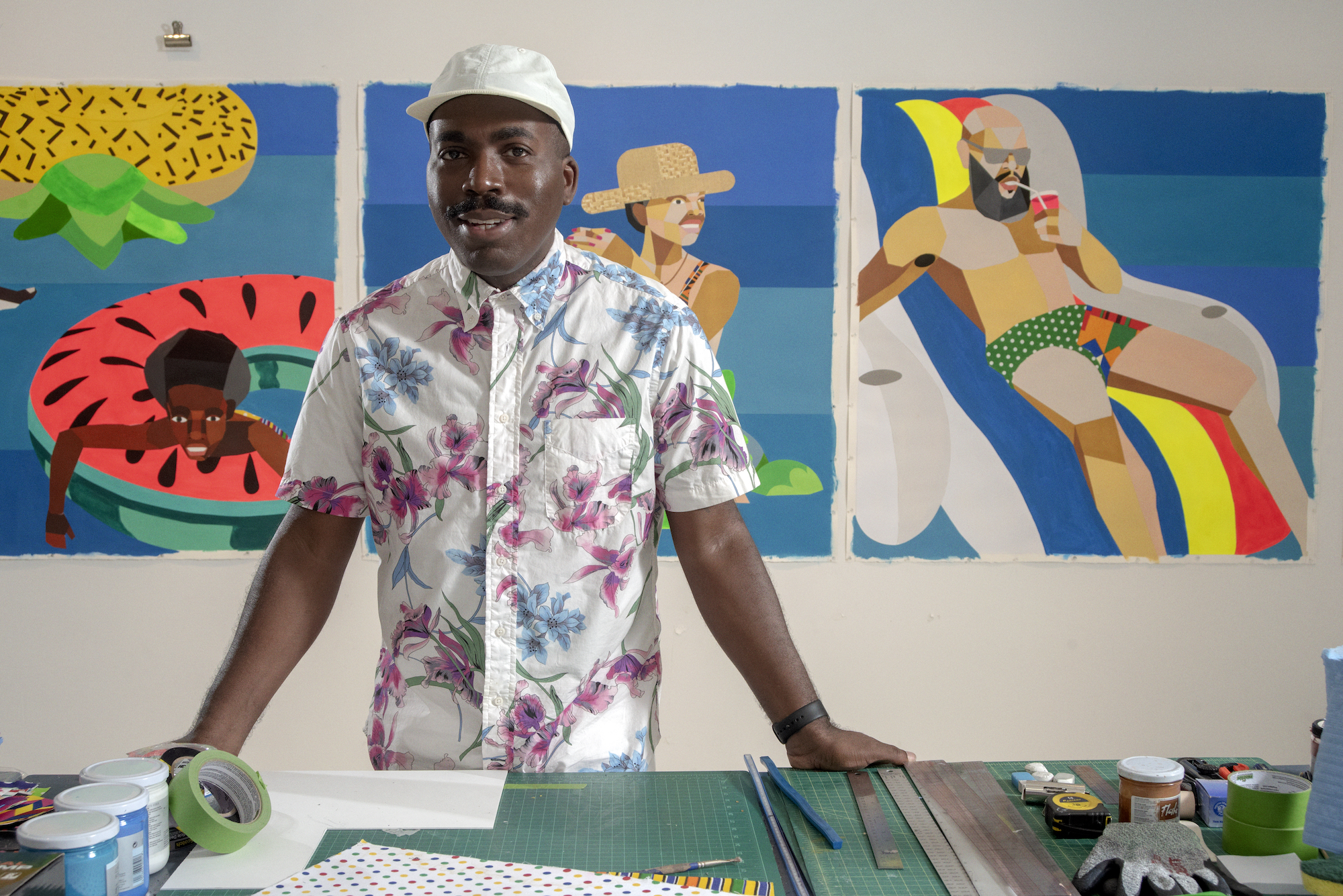 Derrick Adams on Opening a Solo Show, Working on a Big Commission, and Surviving Coronavirus
Culture

Derrick Adams on Opening a Solo Show, Working on a Big Commission, and Surviving Coronavirus

How have New York’s artists, who are used to carrying out their work in solitude, adapted to the pandemic? Avenue asked a trio of artists how these unusual days have shaped their practice in our "In the Studio" series
By Angela M.H. Schuster
Photography by Richard Kern
RIGHT IDEAS: Derrick Adams in his Atlantic Avenue studio with a trio of works executed during the lockdown.

“When I open the door and turn on the lights, I am so excited to see all of these works in this space. They are so uplifting and antithetical to the times we are living in,” says the Baltimore-born, Brooklyn-based artist of the nearly two dozen painted collages tacked to the stark white walls of his Atlantic Avenue studio, all produced since the New York City lockdown began in March.

The brightly hued pieces, with their abundant use of neon pigment and kente cloth from Ghana, celebrate Black friends at leisure — swimming; relaxing on a pool float, summer cocktail in hand; and enjoying a day at the beach.

“When the lockdown began, I thought I would just produce a couple of pieces, mainly to trade with fellow artists. Suddenly, I had made 22.”

The new works, Adams explains, are a continuation of a series titled Floaters, which he began in 2015 and had supposedly “completed” late last year, well ahead of the March 7 opening of his solo show “Derrick Adams: Buoyant” at the Hudson River Museum in Westchester. (Accompanying “Buoyant” is an immersive installation, We Came to Party and Plan, created during the artist’s 2019 Robert Rauschenberg Foundation summer residency, which is on view through October 18.)

It was likely at the museum, says Adams, that he caught the virus, which laid him up for a week just days after the opening night party.

“Oh my God, I was on the phone and texting constantly with friends who are doctors and frontline workers, who assured me I would be okay so long as I got enough rest and took care of myself. By the time I recovered, New York was on lockdown, leaving me nowhere to go. I live around the corner from the studio so coming here to work became a sort of exercise in meditation and healing.”

A corner of the artist’s studio is dominated by a larger-than-life family of paper dolls — maquettes for an upcoming project, a large-scale commission for the lobby of the Milwaukee Art Museum, which is to be unveiled next year.

“For the installation, I took my inspiration from the Green Book, which allowed Black travelers to enjoy the same Utopian America experienced by their white counterparts during segregation, as well as from pictures of Martin Luther King on vacation with his family in Jamaica, published in the June 1967 edition of Ebony.”

Prior to the pandemic, says Adams, he never had the time and space to make this much work.

“It has been really exciting to see the images together. And it is a show, albeit a very private show. For me, it is about other narratives and ultimately the pursuit of the American dream — the carefree pleasures of success and the downtime it affords for reflection and family, especially in these challenging times.”

Mugrabi Divorce Settled: "She Asked for $100 Million"
Recommended for You
Culture
Suitable for Children: 'A Christmas Carol' at Half the Length
Culture
Rooney, Eggers, Franzen, and More: 14 of the Best New Books
Culture
How to Steal Back a Picasso From Your Ex