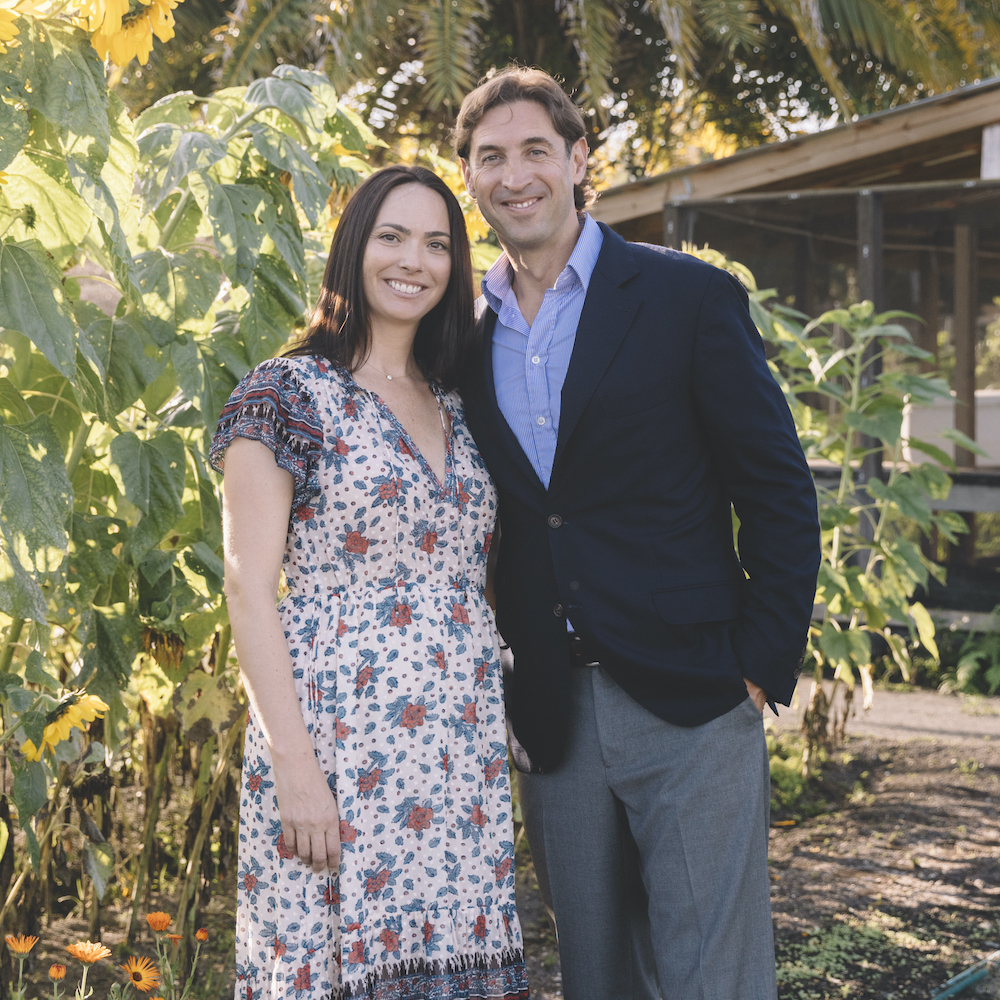 Salt of the Earth
By Horacio Silva
FARM TO TABLE: Margaret and Franck Duriez at their farm in Loxahatchee, Florida
Photo by Nick Mele

Not all heroes wear capes; some wear overalls.

From her home in Palm Beach and a small farm in the euphoniously named Loxahatchee, Florida, Margaret Duriez is fighting the good fight on behalf of the nutritionally and financially vulnerable. FreshRx, the organization she founded in 2018 with Dr. Marshall Stone, medical director of pediatric surgery at Jupiter Medical Center, offers education about nutrition and access to fresh fruits and vegetables.

“There are over 300 communities right here in South Florida that have been labeled food deserts,” says Duriez, referring to areas where people have limited access to a variety of healthy and affordable food. “So, it’s not only a pricing issue, but a location and transportation issue that we’re trying to combat.”

FreshRX, whose programs include a mobile farmers market servicing areas that are more than a mile from fresh food grocers, was born out of Lox Farms, an organic agricultural concern that Duriez started in 2014 with her husband, Franck.

On their selling trips to local green markets, Duriez became fascinated with clients who were not only maintaining their health but also regaining it by eating fresh, healthy produce.

“I was so inspired by seeing these people with cancers and all sorts of chronic illnesses taking charge of their lives and shifting to a plant-based diet,” she recalls. “I wanted to be a bigger part of the food as medicine movement.”

Duriez wants to nationally expand her FreshRx Patient Program, which provides free produce to those under medical care who need to improve their diets. That means, in addition to doing everything from planting sprouts to writing newsletters, there’s plenty of glad-handing of donors to be done.

“I’m the Jill of trades,” she says, “and fundraising is hard work. There are so many wonderful nonprofits in Florida that it can be a challenge to communicate why donors should choose this project. You have to put in the extra effort.”

If that means putting up with the occasional jibe about being a Green Acres–style city slicker turned farmer, so be it.

“I’ve heard it all,” she says with a chuckle. “Look, I was born at Good Samaritan in West Palm Beach and am as local as they come. But my family did have a farm in Pennsylvania where I spent time in the summers. I’ve earned my overalls.”

What was Ghislaine Maxwell Doing in New Hampshire?
Recommended for You
Living
Is This the Biggest Hamptons Party Season Ever?
Living

Living
Return of the Social Dead: Could Ghislaine Maxwell Come Back?