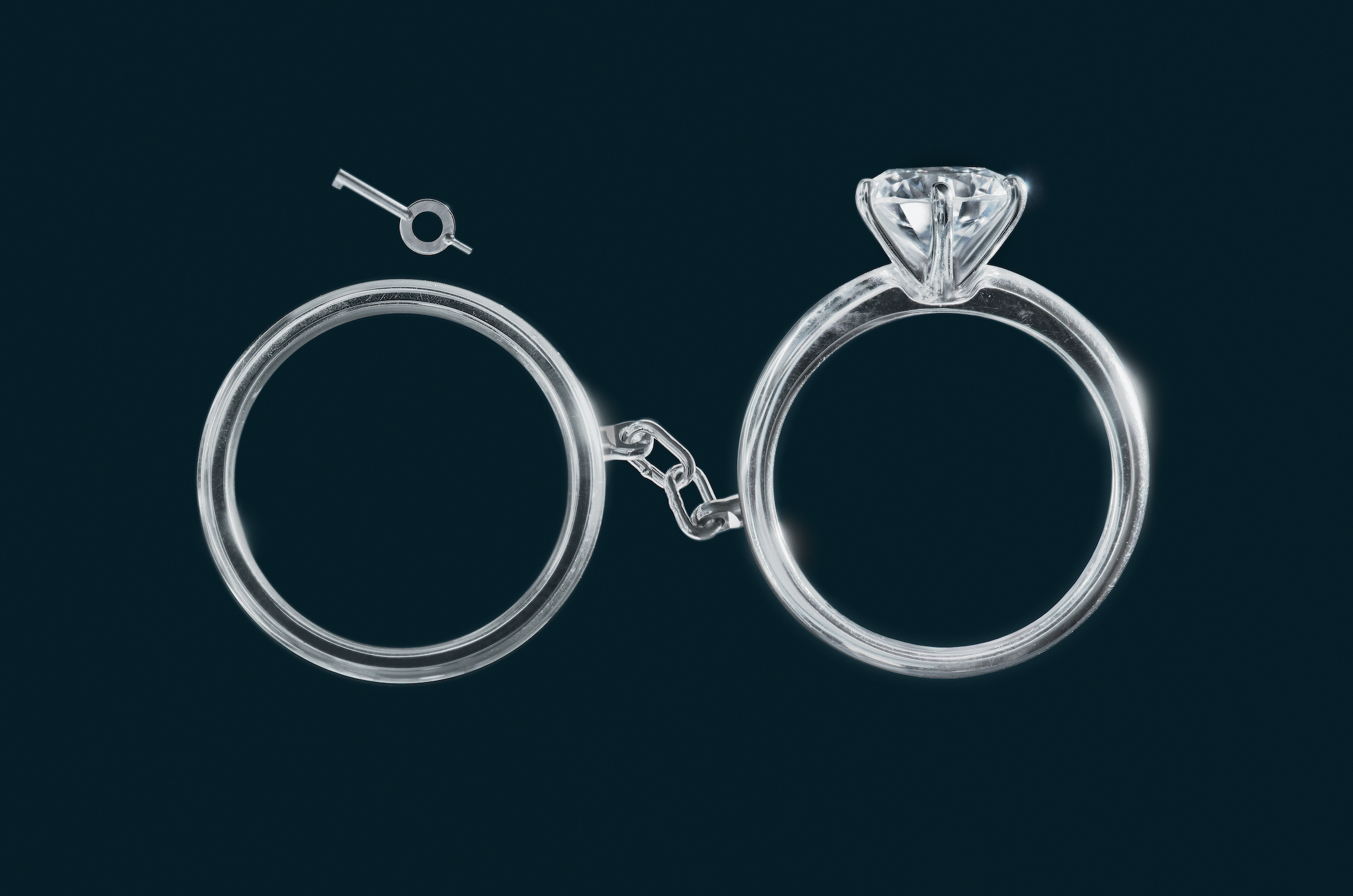 Uncuffing Season (or, How to Win at Divorce)
Living

Uncuffing Season (or, How to Win at Divorce)

The dissolution of a marriage can be just like breaking up a business. It pays to be strategic if you're considering a split
By Mike Albo
Photo by Bartholomew Cooke, via Trunk Archive

“In the Spring a young man’s fancy lightly turns to thoughts of love,” Alfred Tennyson wrote in his 1835 poem, “Locksley Hall.” Which is delightful, except when the man in question is your husband, and those “thoughts of love” involve him sexting someone else.

Perhaps it’s no coincidence that, according to a 2016 study by the University of Washington, U.S. divorce filings spike every August. Just as the young ones have taken to calling the onset of fall “cuffing season” — meaning, time to pair up — the return of warm weather signals its corollary: uncuffing season.

This year may even see a bumper crop of divorces, with the close quarters imposed upon many couples in the spring providing a nudge to those already thinking of going their separate ways. So if a visit to Splitsville could be in your future, it pays to take a map.

In the eyes of the law, marriages are essentially seen as “economic partnerships” — a business, more or less.

“When the love is gone and the sex is bad, it’s still an economic partnership,” says Ken Jewell, a divorce attorney with his own private practice in Manhattan.

In order to get every penny you deserve, you need to demonstrate what you’ve contributed to the marriage, and what your marriage is worth monetarily. Time to get Marie Kondo–level organized, and pretend you are being audited.

It may seem unfairly binary, but the courts see two roles within a marriage, the “moneyed” and the “non-moneyed.” In other words, which spouse made the bucks, and which one maintained the home?

So unless you are Seal and Heidi Klum (who divorced amicably in 2012, content with their individual income streams), the court determines how much “maintenance” or spousal support (alimony) the non-moneyed partner will receive.

These are just ranges to work within. So, lawyers being lawyers, there is room to argue. Especially if the earning spouse started a successful enterprise while you were together — for example, if your wife went off and became Bethenny Frankel while you were married, and you kept the home running so she could focus on making Skinny Girl Margaritas.

(Early in their divorce, a judge awarded her ex, Jason Hoppy, “temporary spousal maintenance” totaling almost $26,000 per month. That ended in 2016 as new reforms to alimony law went into effect.)

The lesson, according to Sherri Sharma, a matrimonial attorney at New York firm Aronson, Mayefsky & Sloan, LLP, is that “indirect contributions matter.”

No New Yorker needs to be told that the world is full of lawyers. But which one is right for you?

To put it in terms of the recent Academy Award-winning divorce drama A Marriage Story: we all know that you should probably not hire Alan Alda’s character. But you don’t want to hire the type portrayed by Laura Dern, either.

“She called up the husband to push him to file a resolution in California? That was outrageous. I would never contact an adversary. I would have filed a motion to disqualify her immediately,” Jewell says.

He cites one often-used strategy is the “war of attrition” — wearing down the other side, stretching out the case (and lawyers’ fees) to get the other side to relent.

“It becomes, how much do you want so that you go away?” says Jewell. He considers himself the Ray Liotta type. “I’m typically the guy who gets the case where the client is in trouble and I dig him out of a hole.”

But even a relentless counsel like Jewell knows he needs to remain within boundaries. “If the courts have a sense that bullying is going on, they will cool it off,” he says. “You have to be careful. I have to make sure I don’t look like I am being predatory.”

It’s important to remember that there are only five matrimonial law judges in Manhattan, and another five in Brooklyn. They are probably seeing your attorney more than you do, so if the judge’s eyes roll when you walk into the room with your lawyer, that’s not a good sign.

“They hate motions,” says Sharma, whose firm has represented several figures in high-profile divorces, including actors Katie Holmes and Richard Gere. “We have to appear with them again and again. If you have no credibility and give stupid motions, that doesn’t work,” she says. “If they respect you and your firm, that’s best for the next case you have.”

“NO FAULT” MEANS NEVER HAVING TO SAY YOU’RE SORRY

In 2010, New York became the last remaining state in the union to adopt a “no fault” divorce resolution. That means adultery; snoring; having the “wrong” opinion about Woody Allen (whichever one that is): none of it matters.

The courts only care about your ex’s hideous behavior if it can be shown to have impacted your income. For example, you can cite if your spouse spent money gambling.

“Or making irresponsible investment decisions (not just bad ones) or spending money on drugs, prostitutes, and ‘third parties.’ That’s the big one — affairs,” explains Sharma. So save the personal complaints for your therapist.

“I remember before [the law changed] we would draft these elaborate examples of cruelty. It was juicier,” says Sharma, who has been practicing matrimonial law since 2007.

She recalls her clients would tell her, “‘He called me a [expletive],’ ‘He had all these affairs.’ Even refusing to have sex could be used as grounds for divorce. It was called ‘constructive abandonment.’ But now it’s all different, and divorce can be based on ‘irretrievable breakdown of the marriage.’”

“In the deposition, I will ask the non-moneyed spouse, ‘Did you provide a good home, did you manage and supervise servants, did you cook, did you make sure the bills were paid, did you show up at work events?’” says Sharma.

So, if you showed up at your spouse’s work, managed files, bounced ideas off each other, you have a much bigger claim. (Jewell adds that the witnesses who support this on the stand tend to be ones with credibility, like accountants and work associates, not spacey friends from yoga class.)

MacKenzie Scott Bezos walked away with $36 billion, the biggest settlement in the history of civilization, because she was there the entire time Jeff Bezos built his empire, way before he got those biceps.

“But even your stereotypical stay-at-home housewife, you are going get at least 5–10 percent,” says Jewell.

THROW THEM OUT “THE GUILT WINDOW”

With steely resolve, can you find your inner Huma Abedin and work out some kind of private agreement?

If you are the injured party (see: Huma) you may want to settle quickly to take advantage of what some divorce lawyers call “the guilt window,” when your philandering spouse with the itchy thumbs still feels terrible and is inclined to be a little less stingy. “Basically, would you rather be happy or right?” asks Jewell.

(Note: if you’re on the other side, maybe don’t look out the guilt window.)

AND THEN, THE ASSETS

Then there is everything else. The houses, the cars, the portfolios, the art collections. When it comes to assets, you have to figure out what’s in play. Is your mouth watering over her real estate portfolio? Not so fast.

Anything bought before the marriage, or inherited, is off the table. So don’t think you will get the Montauk bungalow just because you spent a lot of time there with Ingmar, your energy body healer. Unless, that is, you made renovations and contributed to its appreciation. If you redo the kitchen or worked closely with the contractor (professionally, of course), then you may have some stake.

Consider the current David and Libbie Mugrabi divorce. The Mugrabi family, including David’s father, Jose, and his brother, Alberto “Tico” Mugrabi, have been well-known traders at major auctions for at least two decades, and own the largest private collection of Andy Warhol paintings in the world, along with many works by Jean-Michel Basquiat, Richard Prince, George Condo, and others.

David Mugrabi was married to Libbie Mugrabi from 2005 to 2018 until, she says, she walked downstairs the night after a wine-filled dinner party and found a naked woman lying on top of him in their rec room.

The issue is the art acquired from those years. Libbie is contending that this work is marital property, part of their “economic partnership.” Her contention is that she, as a society hostess and tastemaker, would throw parties at their Water Mill estate, wearing The Row and helping negotiate sales of work hanging on the walls, which, she argues, was on full display during their dinners and other events.

How much will that be worth in the divorce? The world — or at least a particular coterie of high-net-worth New Yorkers — is holding its breath to see what the court decides.

IS THERE ENOUGH MONEY AT STAKE?

That lawyers charge a lot of money is almost a natural law, akin to gravity. In addition, businesses need to be valued by forensic accountants, bank accounts need to be unearthed, art appraisers need to look at your collection, and so forth. And that costs money.

“Jewelry, wine, coin collections, rare books, even Birkin bags have been tallied as assets,” says Sharma. “I had one client whose husband collected weird fireman paraphernalia. And I had a client where the deal almost fell apart over who got to keep the dining room table. The marital assets were in excess of several million dollars.”

Grace Hightower is certainly making a go of it. Disappointed with her $6 million in property, $500,000 in cash, and $1 million alimony prenup, she is subpoenaing Robert De Niro’s financial records, arguing that she is entitled to $500 million made from his earnings during their marriage. (Perhaps she believes Meet the Fockers was a cash cow.)

One thing to note: there is no divorce until an action is filed. Just one side needs to say that the marriage was irretrievably broken for six months. It’s not supposed to be romantic, and it isn’t.

Quibbling over the value of assets can be dicey in court. Basically, you aren’t that special. Judges see cases from across the class spectrum in their courtroom, and who knows what they dealt with before you?

Last year, Manhattan Supreme Court justice Laura Drager ordered that the estranged Harry and Linda Macklowe must sell their top tier art holdings — which includes names like Giacometti, Koons, Warhol, and Rothko — and split the profits evenly, because they couldn’t agree on a value.

(Harry put the price tag at $788 million, while Linda argued it was closer to $625 million. It was in her interest to lowball the number after a judge ruled she could keep $39 million worth of the collection.)

In a way, divorce in the city is a lot like sex in the city. Yes, you should be aggressive and demand what you want, but it’s also best to stay cool about it, like you don’t care. All your acrimony may backfire on you, Macklowe style.

The level of feeling runs high in these cases, often among people who should know better.

Says Jewell: “Sometimes I’m like, ‘Really? You manage a desk at a Wall Street firm, and you can’t contain your emotions?’”

How Coronavirus is Upending Ivy League Admissions
Recommended for You
Family
Hamptons Fall School Enrollments Tip Many NYC Families Will Not Return
Living
My To-Don't List: Hobbies I Refuse to Take Up Even in Isolation
Living
A Celebration of the Minimalist Home