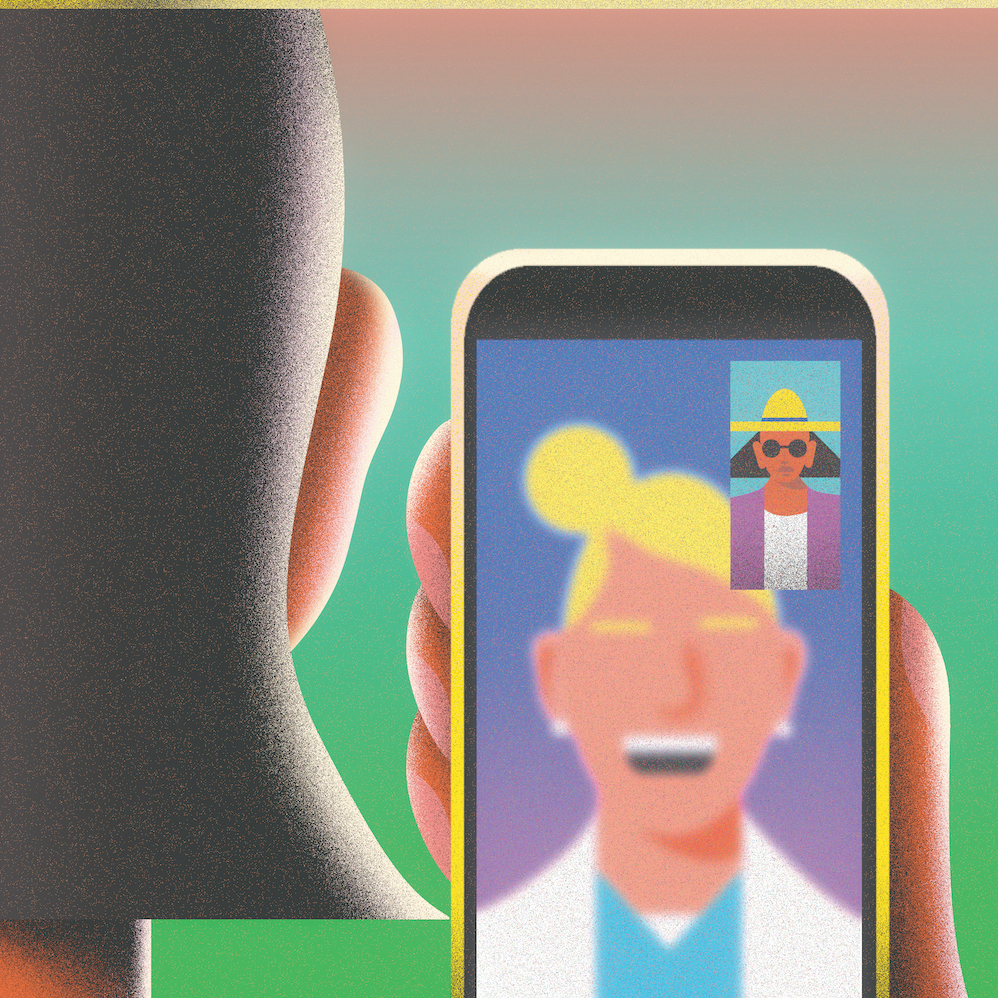 Why Concierge Doctors are the Only Way to Go
Living

Why Concierge Doctors are the Only Way to Go

Take two Aspirin and call them at 3 A.M. Avenue enters the elite world of concierge medicine, where doctors sleep with their cell phones in order to be on call for their wealthy patients 24-hours a day
By Shivani Vora
Illustration by Derek Abella

It’s an unfortunate truism that money can’t buy health. But, as Hippocrates himself might have noted, it’s also true that it does no harm. So it’s no surprise that a city like Palm Beach, which seemingly has a billionaire over every fence, has emerged as a world leader in innovative personal healthcare — for those who can afford to pay.

For the wealthiest of patients, the new must-have is an on-call, private medical team.

Among this elite group of so-called “concierge doctors,” the names to see include Dr. Bina Rashid, Dr. Dean Mann, Dr. Bruce Moskowitz, and Dr. Gabriela Goldstein. These professionals charge an annual fee in exchange for making themselves available to their patients 24/7, according to Sharona Hoffman, codirector of the Law-Medicine Center at Case Western Reserve University, in Cleveland.

“Patients have their [doctors’] cell phone numbers, and they’re always at the ready to drop all else to tend to them whenever they need. Some even make house calls,” says Hoffman.

Physicians respond immediately to everything from pressing concerns like an allergic reaction, a heart attack, or these days Covid-19, to more minor ailments like a cold or a pulled muscle.

Of course, there will always be hypochondriacs. One patient is known for (regularly) mistaking his indigestion for appendicitis. Another accidentally slammed a car door on her young child, diagnosed herself with (nonexistent) Covid and declared the only explanation could be that her reflexes had been diminished by the virus.

Concierge doctors can lavish this kind of attention on each individual because they limit the number of patients they accept. The average medical practice has between 2,000 and 3,000 patients and sees as many as 40 a day; a concierge practice generally takes on only between 200 and 600 and sees fewer than eight.

Naturally, there’s a price for this kind of access, and concierge doctors — like anything else in a marketplace — have their own hierarchy ranging from affordable to elite. Their annual fee can be a palatable $1,800 or an eyebrow-raising $25,000, or more.

At the lower end of the scale, some doctors even accept insurance to help cover their costs of appointments beyond annual physicals. But at the higher end, some patients regard it as a point of honor that they pay out-of-pocket to be attended by experts too rarefied to be covered by insurance plans.

While these doctors have become more common around the country in recent years, says Hoffman, particularly in wealthy areas such as Manhattan’s Upper East Side and Beverly Hills, they seem to have especially taken off in Palm Beach: MDVIP, a national network of more than 1,100 concierge doctors, has 24 affiliates in Palm Beach County, an increase of 33% since 2015.

In comparison, most markets grew between 5 and 10% during that period, according to MDVIP’s CEO, Bret Jorgensen. “Palm Beach has a lot of demand because of its affluence,” he says. “Concierge doctors are a well-known concept there.”

Forget any notion that these doctors are hot in Palm Beach because the city’s population is aging. The 2010 Census indicated that more than half the residents were 65 or older, but concierge doctors say their growth area is patients under 50.

Rachel Scher, a 37-year-old Palm Beach Gardens resident, is a prime example. The publicist and her family, including her husband and their two sons, ages 11 and 9, are among the thousands of locals and snowbirds who rely on a concierge doctor for their medical needs.

“All of my friends also have one, and people here in general are moving toward using them,” says Scher. “It’s a privilege for sure, but well worth it to us.”

Their doctor, Bina Rashid, founder of Palm Beach Boutique Medicine, started her business in 2019 and has already become one of the most sought-after doctors in town. She also treats several prominent celebrities and polo players.

With a yearly fee ranging from $2,000 to $5,000 depending on the number of family members who join (Scher pays $5,000), plus extra for house calls, Dr. Rashid says that there’s nothing she won’t do to accommodate patients.

“I sleep with my cell phone on next to me, and my patients know they can call me any time of day or night,” she says.

Educated at St. Matthew’s Medical School in the Cayman Islands, then in Belize, and with experience that includes several years at both JFK Medical Center and Palms West Hospital, in Loxachatchee, Dr. Rashid, 44, is as stylish as she is competent. Always toting a Chanel or other haute designer bag and dressed in the latest Veronica Beard jacket, even when seeing patients, she was a regular on the charity circuit pre-Covid.

She went into the concierge field, she says, because her regular patients at the primary care office where she previously worked started asking her to be their private doctor.

“I wasn’t able to devote the time to them that they wanted or needed because I was juggling so many patients,” says Dr. Rashid.

Now, instead of rushing patients out in ten minutes or less, Dr. Rashid says that she doesn’t watch the clock. “An appointment can take an hour or even two, and that’s okay because I have the time,” she says.

Her gleaming new office in Wellington, a town where Bill Gates has a house and about a 20-minute drive from Palm Beach, has a sleek modern design with marble floors and contemporary art by Florida artists. But most of her business consists of house calls in West Palm Beach.

“There’s a fear associated with going to the doctor’s office, and being in their home takes that away,” says Dr. Rashid. “I can draw blood and even give an IV on house calls.”

Dr. Rashid reached her 300-patient limit within six months of starting Palm Beach Boutique Medicine. Part of the reason is because her sister, Dr. Asma Rashid, runs a concierge practice in the Hamptons called Hamptons Boutique Medicine, and the two share patients who summer on Long Island and retreat to Palm Beach come winter.

In the wake of Covid, her office phones have been ringing nonstop with new business — a development also noted by the other doctors in the field — indicating a significant increase in demand.

“People want that comfort, now more than ever before, of being able to reach their doctor in case anything goes wrong,” says Dr. Rashid.

This instant availability is exactly why Scher wanted to use Dr. Rashid’s practice.

“She has been nothing short of phenomenal. I love that I call and get her directly, not an answering service or an assistant,” she says. “That’s super important to me if it’s an issue related to one of my kids.”

Scher decided to go the concierge route, she says, because of a scary incident with her younger son three years ago, when he had a severe reaction to a bee sting.

“Our doctor sent us to the emergency room where they treated him for an anaphylactic reaction and kept him in the hospital for five days and even gave him the wrong IV,” she says. “It was completely unnerving.”

Further, despite having good insurance, the hospital presented her with a $5,000 bill for the ER visit.

“We discovered after he was discharged that he didn’t need to go to the ER or stay in the hospital at all,” says Scher. “Spending the $5,000 on a concierge doctor back then would have actually been more cost-effective, and a positive experience, instead of the nightmare we went through.”

If Dr. Rashid is the glamorous and fashionable on-call physician who you want to befriend, Dr. Dean Mann, another prominent name in the Palm Beach concierge cadre, is her teddy bear-like endearing counterpart.

He’s less expensive, too, with an annual fee of $1,800 that includes a two-hour wellness appointment, and he accepts commercial insurance and Medicare for other services such as sick visits.

Unlike Dr. Rashid’s house call business, Dr. Mann sees most of his patients in his ritzy office in downtown West Palm Beach. Situated next to Good Samaritan Hospital, the 1,400-square-foot light-flooded space is adorned with contemporary furniture and has oversize windows in the five exam rooms, which overlook the scenic Intracoastal Waterway.

Dr. Mann made the switch to concierge from a traditional practice in 2004 (a time when the industry was nascent), he says, after becoming increasingly frustrated with the bureaucracy of insurance companies.

“I was seeing more than 20 patients a day, yet my income was going down each year because it was becoming harder to get reimbursed,” he says.

Even though he’s earning significantly more as a concierge doctor than he was before — a big reason why many physicians go into the field — Dr. Mann insists that he’s not in it for the money.

“I’m not projecting myself as a saint because, of course, I want a decent income, but this is a lifestyle that’s less stressful. I don’t have the pressure to jam in so many patients in a day,” he says.

Fewer patients equals higher quality of care for the ones he does have, according to Dr. Mann.

Take Larry Signori, an attorney in Jupiter, who joined Dr. Mann’s practice more than decade ago and says that the doctor has helped him on countless occasions. On a business trip to Chicago last year, for instance, Signori realized that he had forgotten his blood pressure medication.

“Dr. Mann called the pharmacy near my hotel, and I had my prescription in minutes. There’s no way that would have happened with a regular doctor,” he says.

Similar to Dr. Rashid’s view, Dr. Mann explains that this VIP level of service is feasible in a concierge model. Suddenly, midsentence, he cuts off our conversation.

“My patient just walked in ten minutes early, so I have go,” he says. “The point of having a concierge doctor is that you never have to wait.”