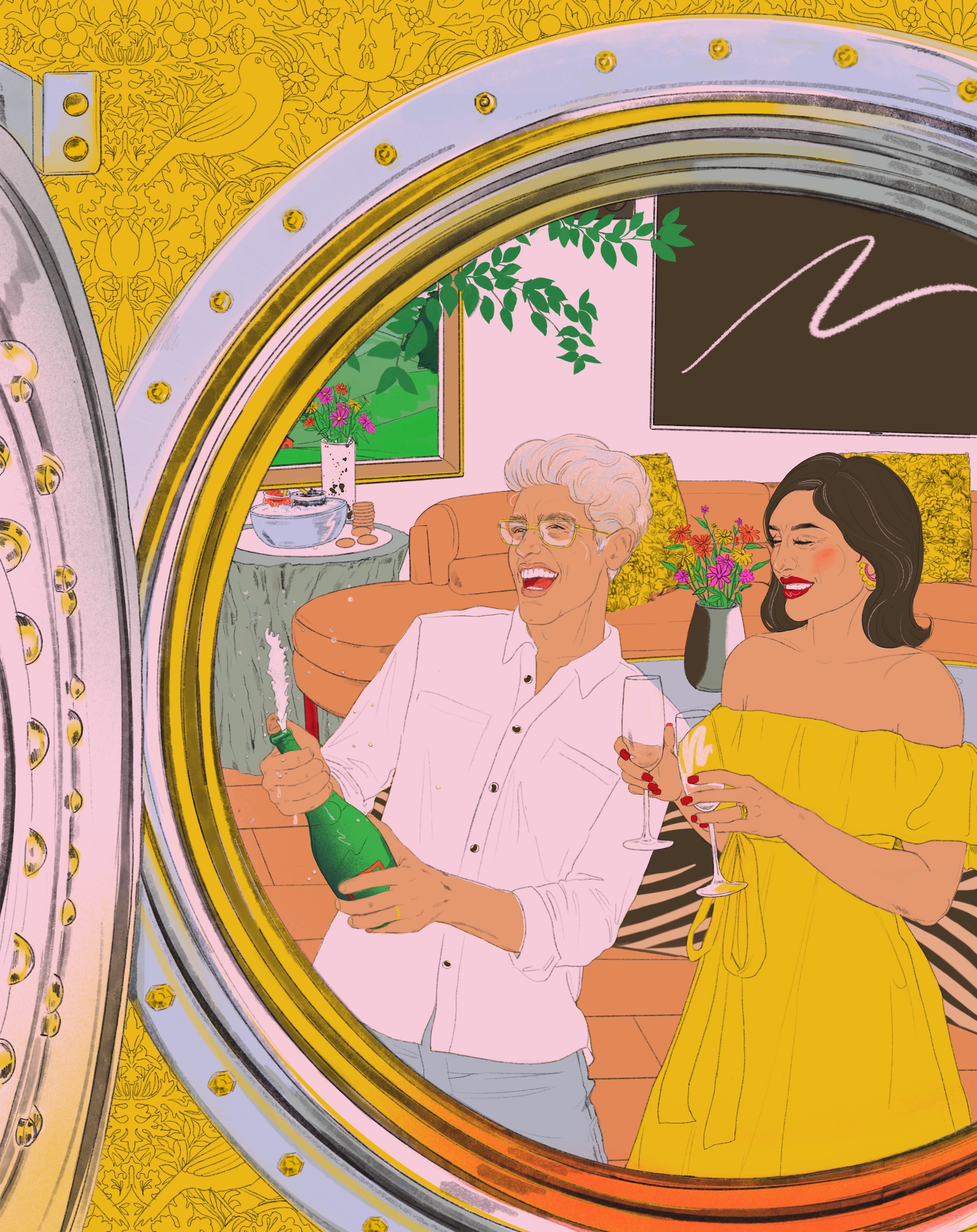 Why Bullet-Proof Screening Rooms Are the New Hamptons Must-Have

Panic! At the hedgerow
By Nancy Kane
Illustration by Lindsay Mound

Forget the infinity pool, the ten-car garage, the infrared sauna, and even the outdoor screening room. This summer’s must-have accessory for the Hamptons elite is a panic room.

“Safe rooms” have been around for thousands of years, from Roman villas and medieval castle keeps to priest holes. Their growing popularity on the East End is the result of a number of factors, from growing wealth in the area (which in recent years has soared from merely stratospheric to almost galactic heights), to an increase in gang activity on Long Island, and most recently a local politics dust up about whether to “save” or “defund” the police.

Last summer, a 24-count indictment was brought against eight members of the MS-13 gang, including multiple racketeering offenses in connection with six murders. This went down in Central Islip, which at just under an hour away from Southampton is too close for many residents’ comfort. Charlie McArdle, president of the Eastern Long Island Police Conference and who also owns a private security company in the Hamptons, said there were gang arrests in Montauk and the North Fork in recent years, as well. “They’re everywhere,” he says.

He knows of several larger Hamptons homes outfitted with safe rooms, and that they are not for the hoi polloi. The cost of installing one starts at $50,000, and can run as high as half a million, depending on add-ons such as a backup generator, supplies storage, and of course bulletproof electronic doors.

Mike Peters, CEO of Ultimate Bunker (tag line: “America’s Best! Underground Bunkers”) adds that you also need to budget for air conditioning and bathrooms. “Those are almost always a must-have. And everyone is always concerned about communication. A cell phone booster is needed to get cell phone service or installation of a landline,” he says. “Communication with the outside world is key.”

It’s not unusual to find four-inch-thick steel doors with ten-gauge carbon steel inner plates and secure bolts around the perimeter. Electronic key guards are de rigueur to prevent lock manipulation. And safe rooms are meant to be secret, so blending into the rest of the house is also important, he points out: “Matching the Sheetrock, lighting, and flooring is important to the high-end customer.”

Larger panic rooms can also do double duty as a wine cellar or a home theater — a guest invited for a screening would never guess the doors are blast-resistant. Others opt for a safe room behind a fireplace or a bookcase, where a hidden switch in a book or on the mantelpiece opens up the hideaway. These are often outfitted with flat-screen TVs, comfortable furniture, and bedding, and stocked with food and even booze because who knows how long you will be in there.

“The most important thing people want in a safe room is that once you close the door, you’re bulletproof and people proof,” says Peters.

In Southampton, “Save the Police: Village in Crisis” signs have sprung up on lawns all over town, symbols of a contentious divide between the mayor and the police department. Mayor Jesse Warren commissioned a controversial outside investigation into his own force, even as the Southampton Village Police Benevolent Association hit him with a vote of no confidence last fall. Though he has denied it, many residents fear the mayor is looking to disband or reduce the Village police, leaving the Town police to handle local crime. Some residents report their pro-police yard signs being burned or defaced, adding to a backdrop of tension McArdle says is increasing demand for private security solutions.

One Hamptons couple told Avenue they have a panic room to which not even their children have been given the code. “We had been robbed in the past, so we built our house with a safe room off our bedroom,” the homeowner says, adding: “Home invasions usually happen at night.” Ingeniously, this safe room is located over the garage and equipped with a chute, so they can slide down to their car for a quick getaway. Fortunately, they have yet to use it.