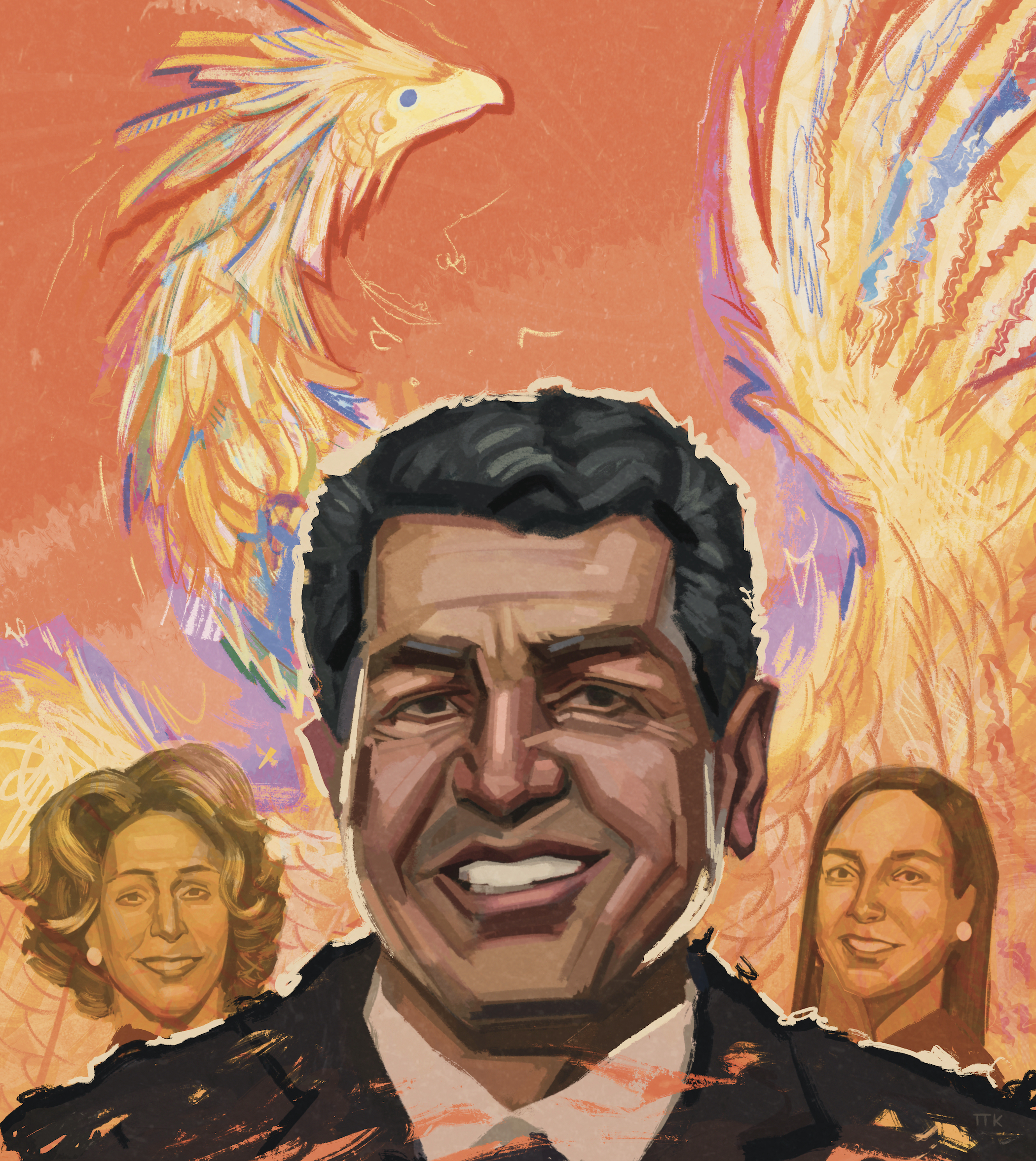 Inside the Dramatic Rise and Fall of Phoenix House
Feature

Inside the Dramatic Rise and Fall of Phoenix House

[Editors note: After publication, a representative for Mitch Rosenthal requested the following statement be appended to the article disputing certain facts contained therein. “Dr. Rosenthal initiated his own departure from Phoenix House, which he founded decades ago, as well as orchestrating his succession. At the time, Dr. Rosenthal wanted to safeguard the strength and longevity of Phoenix House, and he thought it would be best to leave while he could ensure a smooth transition before starting his public policy think tank The Rosenthal Center for Addiction Studies.”]

The legend of the phoenix is familiar. Considered both Greek and Egyptian in origin, the story is the same — the brilliant crimson-and-gold bird bursts into flames, only to be resurrected, just as glorious, rising from the ashes of its own destruction. One can understand why, then, the mythical bird is such an appealing one for Phoenix House, the famed rehabilitation center founded in 1967.

“We, who have destroyed our lives by substance addiction, are striving to do [sic] rise from the ashes of our defeat to take our rightful place in society,” reads its website. In terms of nonprofit drug-and-alcohol rehabilitation centers, it doesn’t get much bigger than Phoenix House. Supporters include Beyoncé, who founded a cosmetology training center within Phoenix House, and a long list of honorees from its annual Fashion Awards fundraiser, among them Tory Burch, Glenda Bailey, Andrew Rosen, Diane von Furstenberg, and more.

But the bird’s tale has taken on another meaning. In a stranger-than-fiction twist, rising like a phoenix is exactly what Phoenix House founder Dr. Mitchell S. Rosenthal is attempting to do with his own life after a long-simmering extramarital affair, now public knowledge in Upper East Side social circles, set him upon a path of ruin.

Dr. Rosenthal, known universally as Mitch, is movie-star handsome and astonishingly pedigreed. A psychiatrist at the U.S. Naval Hospital in Oakland, California, during the Vietnam War, Dr. Rosenthal founded Phoenix House while serving as deputy commissioner of New York City’s Addiction Services Agency. He has been in the business of addiction since. Now firmly an oct5, he walks a fine line between being craggy and rugged and, at any rate, appears far more youthful than his years should allow for.

In 1990, he married Sarah Simms, Ph.D., a psychotherapist. It was his second marriage. But Rosenthal’s wandering eye never blinked. “It’s an open secret,” said a longtime friend of all parties involved. “I’ve known about this for years.” This is a long-term affair that Rosenthal had with society powerhouse Annette Tapert, a cool, patrician blonde.

Tapert, 65, who has authored or coauthored more than 10 books, including memoirs of Slim Keith, Swifty Lazar, and Siegfried and Roy, and a smattering of style-centric books, seemed to embody the glamour about which she wrote. Her first marriage to investment banker William Tapert dissolved when she met her second husband, Vanity Fair writer Jesse Kornbluth. During her affair with Rosenthal she was — and is currently — married to investor, racehorse owner, and breeder H. Joseph Allen, 80, who is based in Palm Beach.

Tapert is well known in society circles, where her charm and work ethic have taken her far. She’s appeared as a talking head on such television shows as Million Dollar American Princesses (2015), E! Mysteries & Scandals (1998), and Charlie Rose (1995). And, added an old friend of Tapert, “She was great working a room.”

For Tapert, a longtime supporter of Phoenix House, it wasn’t out of the ordinary for her and Rosenthal to be seen in each other’s company, until rumors started swirling and it was. “It was not unusual that they were out together,” said the longtime friend. “There were always pictures of Mitch and Annette together,” but then, “You couldn’t not put it together.”

Complicating matters was the fact that Rosenthal’s paramour was a friend to Dr. Simms, Rosenthal’s wife, who seemed increasingly left out in the cold.

“It’s not a pretty story,” added the longtime friend, but “Annette is staying with Joe and Sarah is on her own.”

In fact, Tapert’s old friend said, the affair was never seen as a threat her marriage. “She was never not with Joe Allen.”

Though an open secret among some, it was closed perhaps to the most concerned parties. Simms only learned about the affair after the fact. (It is said that H. Joseph Allen is still unaware.) But now Simms is not staying silent.

“It was a long time before I found out about them,” Simms told Avenue. “Annette was my friend — we were all friends.”

But among the gilded traveling circuit, philandering isn’t exactly unheard of. (However, it is usually carried off with a bit more discretion.) No, the real tea was that not only had Rosenthal stepped out on Simms with Tapert but that he, perhaps the best-known of all addiction experts and the founder of one of the most successful rehabilitation facilities in America, had developed a drinking problem in the aftermath of the affair that lead to his stepping away from Phoenix House in 2007. In terms of downfalls, you couldn’t ask for a more perfect crater.

Rosenthal, naturally, disputes this. Though he admitted to Avenue he had had a drinking problem, he says it was unrelated to his affair. “I did not start drinking because of this,” he says. “About one and a half years ago, I felt I was drinking too much. I dealt with it and that’s the end of it.” He added, “It seems to me not to be as juicy as it sounds.”

Perhaps not. But his quick departure from Phoenix House — and subsequent scrubbing from their press materials — in order to found the much smaller and less prestigious Rosenthal Center for Addiction Studies does seem puzzling at best. According to the organization’s 2019 finance report, Rosenthal is the center’s only paid employee, and it boasts a questionable board of directors — which includes not only Tapert but “electroceutical” entrepreneur Chip Fisher and Douglas Schoen, perhaps best known as a lobbyist for Ukrainian oligarch Victor Pinchuk.

It’s a far cry from Rosenthal at Phoenix House’s prime. As the addiction center’s founder and public spokesperson, Rosenthal was its smiling and charming face. He seemed always to be out networking, socializing and always looking for donations. And — since who doesn’t want to support second chances — he was soon pressing flesh with fashion industry leaders like Tommy Hilfiger, Vera Wang, and Diane von Furstenberg, as well as actress Mary Steenburgen and local leaders Andrew Cuomo, Michael Bloomberg, Cardinal Timothy Dolan, and more. But his matinee smile irked some longtime Rosenthal watchers.

“He turned on the charm and made a success of himself, but he always felt a little off to me,” says one media exec who has known Rosenthal since his first marriage. “I don’t trust him. I ran into him all the time — he goes to a lot of parties.”

This media executive also knew Rosenthal’s first wife, author and interior design expert Ellen May, now Ellen May Wright. “Years ago, we played tennis with them,” the exec says. “We heard he screwed around on her.” After they divorced, “She was too much of a lady to blast him and she remarried very quickly.”

At that time, Rosenthal’s charm and charisma seemed to know no bounds. “In New York City, Mitch was an important figure,” Simms said. “He was divorced for a long time and he’s very… exceptionally good-looking.”

Rosenthal, then 54, and Simms, then 33, married in 1990 and became a team in every way. He raised both money and the profile of Phoenix House while Simms was earning her Ph.D., and afterward she became an adolescent family therapist, seeing clients at Phoenix House and in private practice. They were the benign king and queen of the demimonde. Unfortunately, after 10 years of marriage, Simms became ill with myalgic encephalomyelitis, otherwise known as chronic fatigue syndrome. The disease transformed her from a vital, vibrant, and active woman to one whose activity is dictated by the level of fatigue she feels each day. “When I collapse into bed, the fatigue actually hurts,” Simms wrote for Thrive Global in 2018. “It has completely upended my life.” In more ways than one. According to Tapert’s old friend, Rosenthal’s affair began during Simms’s health crisis. “When he started to take care of her because she couldn’t take care of herself, they’re no longer partners in all respects.” The friend added: “There are couples who are teams with a real marriage and then there are just couples.”

Simms tells a slightly different story. “It was not one thing — not Annette, not the alcohol — it was a slow unraveling, and all of the things pulled us apart. We’re not divorced, but we live separate, independent lives,” she said, adding, “but there is still” — she paused — “consideration between us… It’s an unusual arrangement as it exists,” she continued, “This is not a War of the Roses situation. We can cohabitate because it’s a big enough apartment that we can maintain privacy.” But she added, “We’re not getting back together — it’s not going to happen.” In fact, Simms, who admits she has a profile on Bumble, says “I put myself on it because a friend said, you’re 65, what are you waiting for?”

Though her rift with Dr. Rosenthal might be permanent, Dr. Simms has reached a détente with Tapert, who couldn’t be reached for comment. Simms says, “We made peace.”

All this leaves Rosenthal smoldering out in the cold. But don’t mourn yet. As he well knows, belief is an integral part of rehabilitation, and Dr. Rosenthal clings to a mixture of faith and, perhaps, delusion. According to him, he is still happily married. Rosenthal insists things with Simms are “fine.”

“We are together,” he told Avenue. “We do a lot of things separately, but we live together.” And it is, perhaps, through that gap, between reality and myth, that Dr. Rosenthal hopes to reemerge, glorious once again.

Mugrabi Divorce Settled: "She Asked for $100 Million"
Recommended for You
Feature