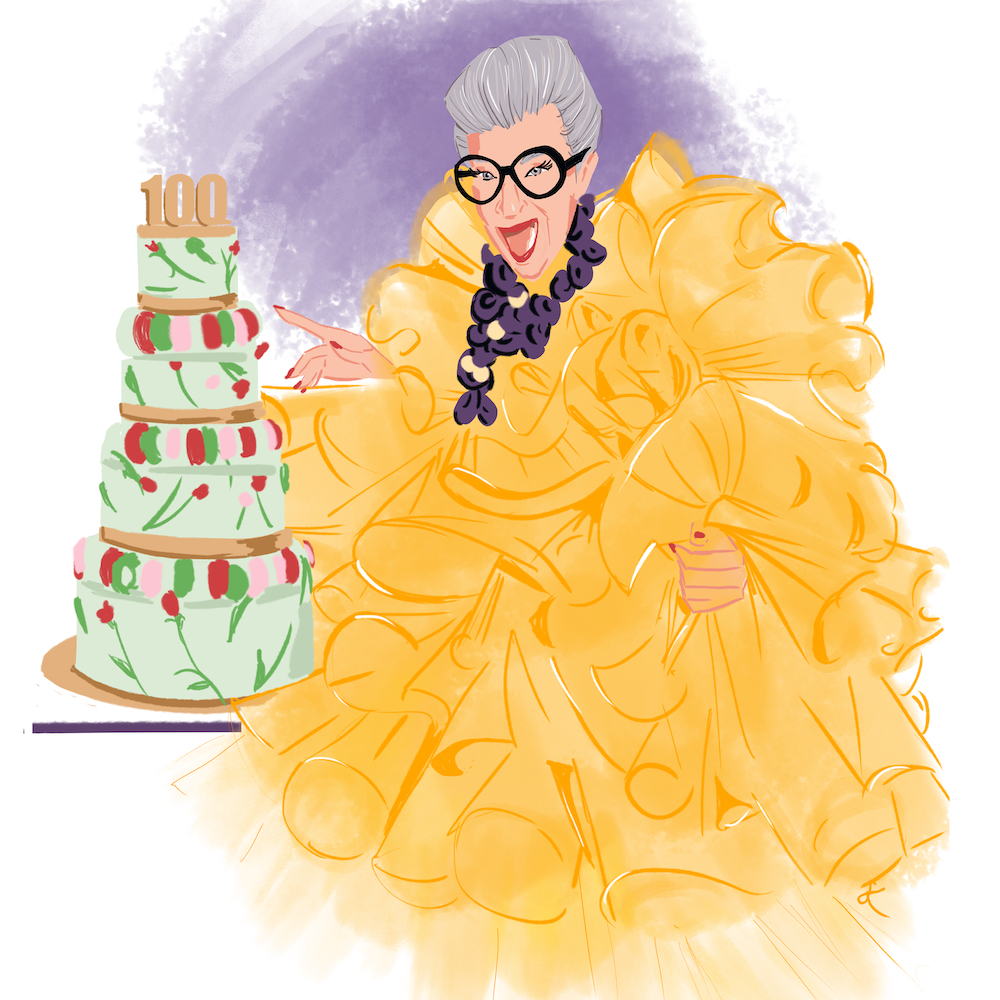 “Your ears pop three times,” said the elevator attendant at Central Park Tower one night in the early fall, on the way up to the 107th floor. Party guests — including Donna Karan, Tommy Hilfiger, Katie Holmes, Linda Fargo, Bruce Weber, Victor Glemaud, Fern Mallis, and Halle Bailey — each of whom had just undergone a mandatory Covid-test nasal swab, rolled their jaws to relieve the pressure as the elevator display ticked into triple digits.

The doors opened onto a fresh-paint-smelling fantasia of celebratory kitsch: red velvet divans in the shape of giant lips; overflowing vases of fuchsia-dyed pampas grass; a baby grand piano next to a tower of champagne coupes; and tabletops covered with frosted cupcakes, chocolate gateaux, and every kind of dessert. Such an over-the-top setting could only make sense for one woman in New York City: the interior designer and latter-day fashion icon Iris Apfel, who was celebrating her 100th birthday.

Just before nine o’clock, as guests were taking in the views — only on 57th Street can you be on the 107th floor and still be looking directly into the neighbor’s apartment across the way — Iris made her entrance, in Big Bird-yellow slacks and giant ruffled top from her forthcoming collaboration with H&M, accessorized with her signature layered chunky necklaces and owlish round glasses.

From the piano, Michael Feinstein serenaded her with “Happy Birthday” as she settled onto a white throne to receive well-wishers, pose for pictures, and dispense one-liners.

“I’m surrounded by a bunch of 50-year-olds,” she said. “I didn’t think I’d have to babysit on my birthday.”

From the kitchen, servers emerged with trays of brownies held aloft by large helium balloons. As another a nervous-looking young waiter ascended a stepladder to fill the champagne tower from magnums of Pol Roger, Iris took the microphone. “People ask me, ‘What’s it like to be 100?,’” she said. “But I’ve only been 100 for a couple of days. Stick around, and I’ll tell you!”