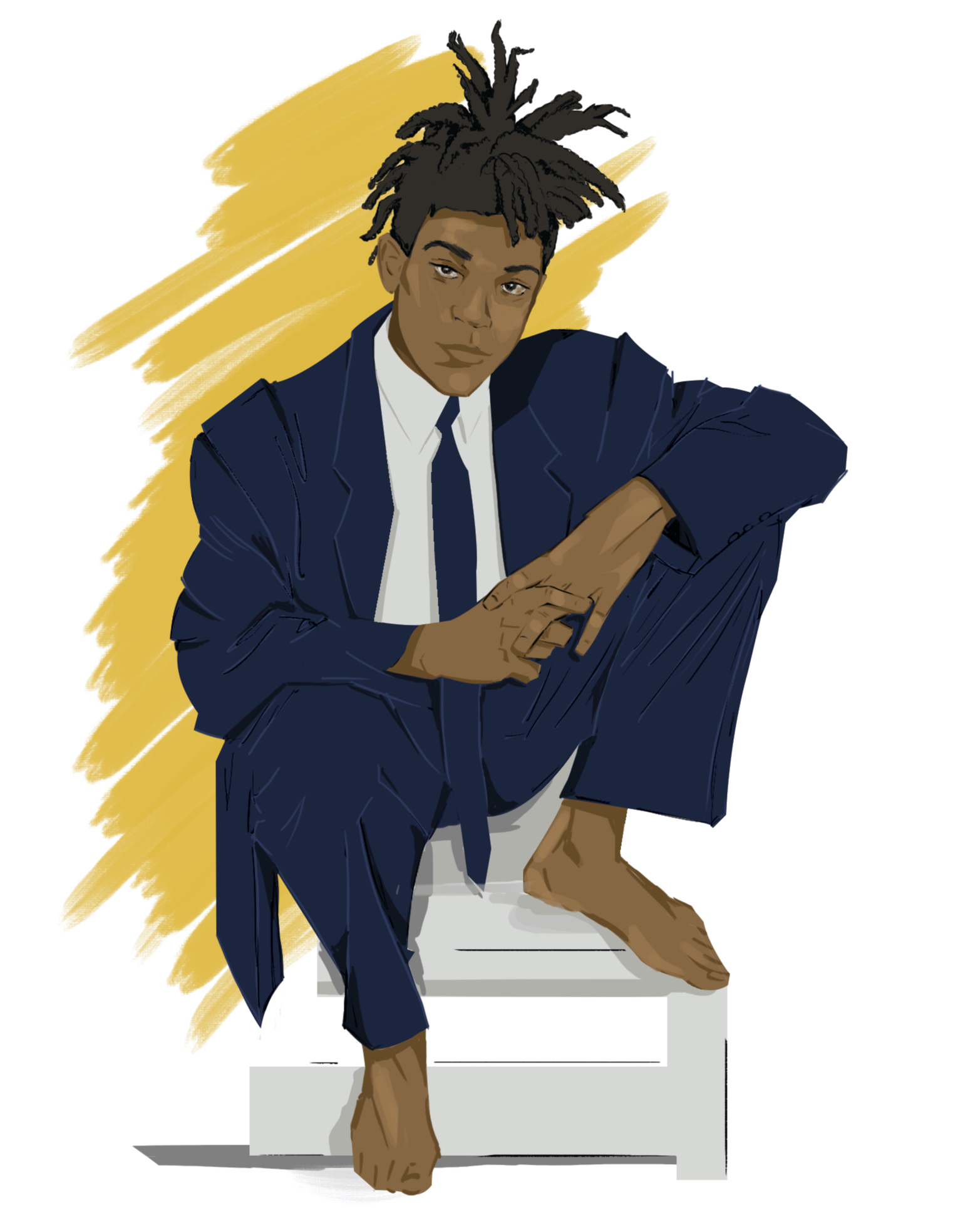 All hail the king
By Horacio Silva
Illustration by Sandra K. Peña

Jean-Michel Basquiat’s legacy has been pulled in all directions since his death from a heroin overdose in 1988 at just 27. He reigns as the unimpeachable avatar of downtown cool, and a cautionary symbol of the voracious art market — an eternally young cipher trotted out by the fashion and culture industries, from Uniqlo to Gagosian. His story has been told by everyone, it appears, except for those who were closest to him.

Until now. Opening at the Starrett-Lehigh Building on April 9, “Jean-Michel Basquiat: King Pleasure,” a comprehensive exhibition of more than 200 previously unseen or rarely shown works, is the first exhibit of its kind to be presented by his family.

“This is a way for us to collaborate as a community and fill in the spaces from all of our perspectives on Jean-Michel and his impact on the world,” says the artist’s sister Lisane Basquiat, who has curated the exhibition with her younger sibling, Jeanine Heriveaux, and their stepmother, Nora Fitzpatrick. “It’s a gift to our family and others that they can look at this personal account of who he was.”

Adds Jeanine, “There have been many exhibitions of Jean-Michel’s work, but never told from our perspective — Jean-Michel as a child, a man, a son, and a brother. We wanted to bring his work and personality forward, in a way only we can, for people to immerse themselves in. We want this to be an experiential and multidimensional celebration of Jean-Michel’s life.”

Spanning 12,000 square feet and designed by Sir David Adjaye, the award-winning architect behind the National Museum of African-American History in D.C., “King Pleasure” — the title refers to one of his paintings, which was named for a bartender turned underground bebop legend whom Basquiat’s father, Gerard, was fond of — consists of several themed rooms, including a re-creation of the artist’s Great Jones Street studio (rented to him by Andy Warhol) and the VIP room of the former Palladium nightclub. In addition to Basquiat’s paintings and drawings, there will be live performance, dances, and fashion shows, as well as educational programs.

The objects and ephemera interspersed throughout the show not only illustrate his artistic efforts and influences, from Black American sports figures to literature, but also his unflagging interest in social justice, politics, and class.

“Jean-Michel stands at the forefront of really strong people who are committed to showing up in the world in a specific way,” says Lisane. “And that runs through our bloodline. Now our children know what can happen when you live your truth, when you stand up for what’s right for you and exert a work ethic, passion, and commitment to why you believe you’re here.”

Jeanine puts it more succinctly. “I think the title sums him up perfectly,” she says. “Jean-Michel was a king.”