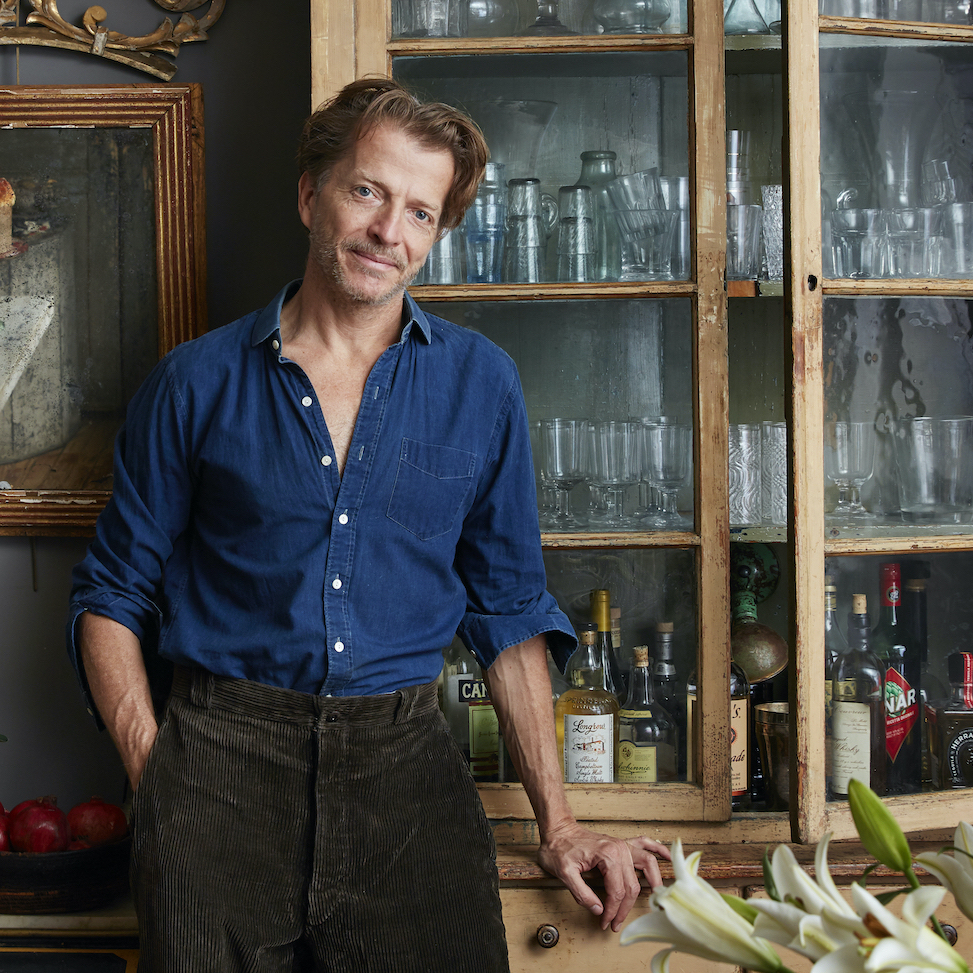 How John Derian Celebrates the Beauty of a Bygone Age
Living

How John Derian Celebrates the Beauty of a Bygone Age

The era of his ways
By Heather Hodson
CURIOS AND CURIOUSER In his East Village kitchen, John Derian stands by a 19th-century painted glass cabinet from France. The rug-covered slipper chair and French mirror are 19th century, while the gilt ornament is 18th-century Austrian. Atop the cabinet is a papier-mâché mix by Antoinette Poisson. “I like comfort, function, pretty and natural and organic elements,” he says.
Photo by Stephen Kent Johnson

John Derian has what people in the design world call “an inspired eye.”

His revered shop at 6 East Second Street is nick-named “the grocery store” by New York’s fashion elite, who regularly make pilgrimages to browse the Dutch floral paintings; eighteenth-century glass-ware; melamine plates and paperweights of delicate flora and fauna; antique ephemera and vintage textiles foraged at fairs in the South of France; and charming bespoke sofas and chairs. Among the most popular items in his East Village Aladdin’s cave is the signature decoupage — a traditional art using found images to decorate household objects — that he creates in his New York studio and seems to have single-handedly revived.

“I like handmade things that are quirky and funny and have a naive quality about them, things pre-photography, when the images were more special,” he explains one recent morning from Provincetown, where he has a home. “I compare it to a chef finding fresh food.”

Enter one of his eclectic stores (he has three in downtown Manhattan and another operating out of the ground floor of his house in Provincetown) and you are transported to a period sometime between the Regency and the 19th century: a bygone era of seafarers and botanists, Pre-Raphaelite artists, and Victorian explorers. Take his new collection of whimsical notebooks and puzzles, inspired by the 19th-century prints and Victorian manuals he has amassed over the years, containing instructive drawings of vegetables, flowers, and color wheels. Like everything Derian touches, they have a Proustian quality, enshrouded with fragments of memory and subtle, sensory associations. A kind of emotional decoupage, if you will.

“I do think people relate to the imagery,” he says. “Everybody has a connection to the natural world, from childhood memories and so forth.”

Derian’s own childhood was spent in Watertown, Massachusetts, the youngest of six children born to a Scottish mother and an Armenian father whose family came from Turkey. “I was left alone, and I think I created these imagined worlds,” he says. “I was pretty content being by myself creating forts and environments anywhere I could: under our porch, in the attic, in the bushes, in abandoned buildings. I was fascinated by nature and collected a little.”

His facility for conjuring up an atmosphere was already apparent. “I was forever moving furniture around. My nephew and niece, who were five and eight years younger than me, would hide in an attic closet while I rearranged the room and changed the lighting, and then I would have them come out, and they believed they were transported to somewhere else, another planet or time.”

Inspiration also came from his aunt Louise. “She had a flair,” he recalls of his father’s sister. “She traveled with her husband all over the world and her house reflected that in her choices of décor — drapes, hanging fixtures, objects and statuary. I was fascinated by things she brought back from her trips.”

An autodidact who admits he “never quite understood school,” he spent his time painting, drawing, playacting, singing, and making things, and after briefly attending the Massachusetts College of Art and Design he moved to New York in 1992. When a friend asked to buy a dry wreath he had made, he was encouraged to continue designing beautiful objects, and in 1995 opened his first shop. Now he employs a staff of artisans and “magically” owns four stores. “I feel like my life happened organically,” he says, sounding a little incredulous.

This past year, Derian says, he has “never worked so hard in my life. I wear a lot of hats: designer, wholesaler, manufacturer, retailer, buyer, visual department, and social media ‘expert.’ I have had to manage the shops and my production studio and wrap my brick-and-mortar brain around the web. I am so low-tech, but we made it through.” He pauses. “I hope I don’t sound too complain-y. I do appreciate all I have.”

With his partner, the interiors photographer Stephen Kent Johnson, Derian has enjoyed shuttling between his turn-of-the-century apartment in the East Village and his 18th-century house in Provincetown. “The house was built in 1789 for a sea captain named Small, then the Hall family took over in the 1930s, then me in 2007,” he explains. Like his stores, both homes evoke a bygone place and time achieved through the union of color, timeworn antiques, and unexpected yet beautiful objects. In New York, 19th-century antiques and textiles are offset by pressed-tin ceilings, while an antique Swedish wall he kept in storage for 18 years separates the kitchen from the living room.

A vestibule has been created out of a painted antique cabinet, opened at the back, through which visitors enter and exit the apartment.

But it is his mariner’s home he considers “even more authentic,” its décor of faded wallpaper and natural and seaside curiosities creating a mise-en-scène evocative of C. S. Forester’s Horatio Hornblower novels. All design innovators see the world from a different perspective, and Derian’s aesthetic vantage point is from several hundred years ago. “I do like the 18th century,” he confides happily. “My house in Provincetown is like living in 1789. I feel that’s the right period for me.”

John Derian Picture Book and John Derian Paper Goods are published by Artisan and available wherever fine books and stationery are sold; all decoupage and home goods at his stores and johnderian.com