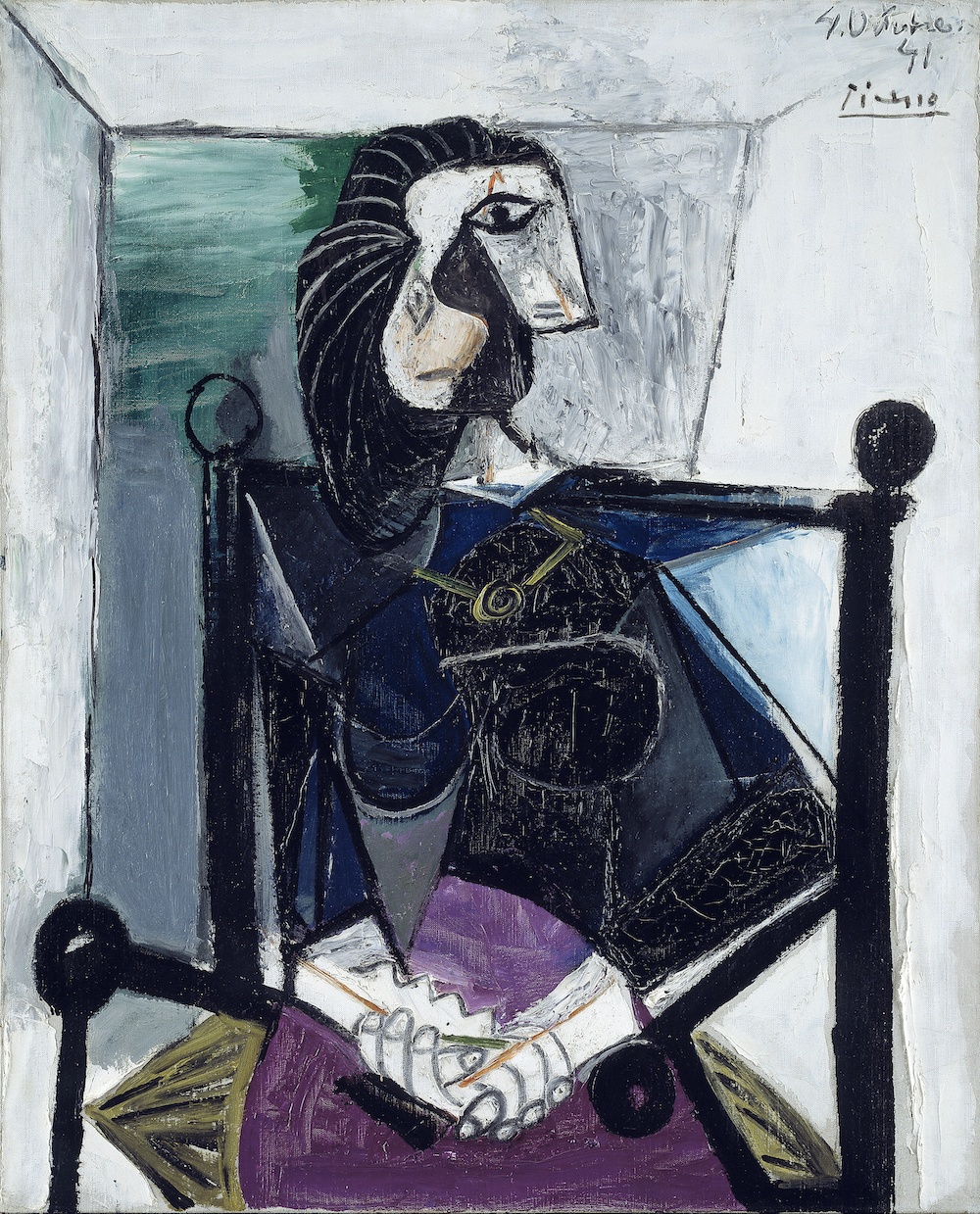 How to Steal Back a Picasso From Your Ex
Culture

How to Steal Back a Picasso From Your Ex

Looking like a pirate at a fancy-dress party, John Richardson, arm in a sling, with eye patch and head bandaged, sprang out of a battered postwar ambulance that served as the local taxi service. It was the summer of 1967 and John, along with his then boyfriend, Lyn Parker, had been staying the week before with my parents, the artists Anne Dunn and Rodrigo Moynihan, in their converted monastery near Aix-en-Provence in the south of France.

In those days my parents were usually painting in their respective studios for some exhibition or other, and were never to be seen during the day except at lunch and dinner, so it was left to whomever was around to entertain me. John fulfilled the role perfectly. While Lyn, a languid, handsome, blond-haired Texan, drank copious amounts of gin and tonics by the pool, John patiently kicked a football back and forth over the parched earth in the midday sun. Finding in John a willing accomplice, I managed to persuade him to play every conceivable pool game and field game. Apart from football there was also badminton, cricket, and boules. He never tired, and apart from the siesta I let him have, he always seemed to be willing to entertain me. He was always the most gregarious, amusing, and mischievous man in the room.

The week before their accident, John and Lyn had arrived in a red convertible Mustang, an extraordinary novelty car in those days. They were making a tour of the south, visiting John’s old friends, grand friends, or useful friends. My mother was introduced to John after the war by the author and future literary editor of London’s Sunday Times, Francis Wyndham. She and John were to remain the greatest of friends for the rest of their lives.

At the time, and rather against her ideals, my mother was “coming out” as a debutante. But frugal postwar deb balls soon gave way to the infamous Gargoyle Club in Soho, where the aristocracy, art world, and demimonde collided. It was here that John and my mother, now a student at the Chelsea School of Art, left the drab, food-rationed London to drink and dance the night away.

Francis Bacon threw a days-long wedding party for my mother and her first husband, the painter Michael Wishart, at his studio in Cromwell Place. Its licentiousness would become a legend of bohemian London, spoken of for decades afterward. “I would stay for eight hours, then go home and collapse and sleep it off and then rejoin the party,” John later told Bacon’s biographers, Annalyn Swan and Mark Stevens. David Tennant, the not-easy-to-impress proprietor of the Gargoyle, observed that it brought about “an alteration in the marital arrangements of a surprising number of the guests” and the “prolonged ruby-lit nuptial bacchanal was the first real party since the war.” In fact, my mother and John were to have many more adventures to come.

John was a genial, witty, carefree man about town. But he was soon to fall into the clutches of Douglas Cooper, the sinister art impresario and Picasso collector, friend, and fan. They met in 1950, when John and some friends had gone to Cooper’s home in Knightsbridge. John, who was obsessed with the Cubist masters, was overawed by the quality and sheer volume of the paintings on the walls; Cooper was equally delighted to show his handsome visitor the collection. The inevitable lunge occurred over a cigar later that evening, and the relationship that evolved was to last for over a decade. Douglas was the son of a wealthy businessman whose Australian forebears had owned sheep farms and large swathes of Sydney. After an eventful war, which included working with the French résistance and for military intelligence in Cairo, Cooper was assigned to a unit set up tracing artworks that had been stolen from Jewish collections and sold through dealers to unsuspecting collectors. In this he was hugely successful, and was responsible for an impressive amount of repatriated works, as well as the prosecution of many a complicit dealer.

Soon after John and Douglas became lovers, they made a grand tour of Europe, visiting museums and collections. One day they chanced upon the Château de Castille outside of Arles, which had a small sign on the gates advertising its sale. Douglas and John fell in love with this extraordinary, colonnaded chateau and bought it on the spot. It had not been lived in for many years and was in a state of great disrepair, but after some renovations they moved in together with Cooper’s vast collection of Cubist artworks.

Due to the proximity of the château to the two great bullfighting towns of Arles and Nîmes, Picasso and his entourage soon became frequent visitors. Before long Cooper and Richardson would accompany Picasso to the fights, together with Cocteau and many other writers and painters. Castille in the ’50s and early ’60s became a social hub for anyone coming down from Paris or London. John describes the extraordinary variety of guests who passed through in The Sorcerer’s Apprentice, his account of his relationship with Cooper. It also weaves in his growing friendship with Picasso, which was to culminate in his four-volume biography of the artist.

At that time my mother and Wishart were living in Saint-Tropez, which in those days was a sleepy fishing village. John and Douglas went to visit the young artists and their newborn son, my older half brother, Francis. The two couples met at the top of the hill above the port. Douglas held the pram in which Francis lay asleep while they talked, and then for no reason at all simply let go. The pram bounced down the hill, gathering speed as it approached the quay, only for a fisherman to lunge out and catch it before it reached the water’s edge and, no doubt, my brother’s untimely death.

Cooper was not at all apologetic and gave no reason for his callousness. He was the kind of man who would have calculated what would happen and found it amusing. My mother never forgave him, but she was to have her revenge when, years later, tiring of Douglas’s malicious and acidic character, John had finally left him and Château de Castille for good. By then my mother was living with my father, Rodrigo Moynihan. Ever vindictive, Cooper refused to return any of John’s belongings, including many works of art given to him by Picasso and Braque. One night my parents drove John to La Castille, where they broke into the chateau and loaded up the car with John’s possessions. As they were leaving my mother scrawled on the wall where the paintings had been “Anne Dunnit.”

When he and Lyn left Aix-en-Provence in their convertible Mustang, I believed that was to be the end of my playtime with John. But a few days after their departure Lyn, probably drunk, managed to overturn the car at high speed; it was very fortunate that they survived the crash. Although this horrific accident inflicted much injury, I remember when the ambulance taxi rolled up being over-joyed to have John back in my orbit, even though games would not be on the agenda.

Years later, in the ’80s, I came to live in New York and would see quite a lot of John, who usually lunched at Mortimer’s restaurant on Lexington and 75th Street. More often than not he would be sitting with a powerful collector such as Brooke Astor or one of the many English expats who had made their homes in New York.

One night I was taken by a friend with a penchant for outré places to some rather extreme S&M clubs on the Lower West Side. As I was standing by the bar, watching an eye-popping encounter between several participants, I saw John in black leather and cap together with assortments of chains and a whip dangling from his belt. With a mischievous grin he acknowledged me, before disappearing into the dark recesses of the club.

A Life of Picasso: The Minotaur Years 1933–1943 by John Richardson is published on November 16 by Knopf.

Mugrabi Divorce Settled: "She Asked for $100 Million"
Recommended for You
Culture
The 45th Annual DanceAfrica Festival Returns to BAM
Culture
Onna House Transforms the Hamptons Into a Hub for Female Artists
Culture
Everything to Know About Frieze New York