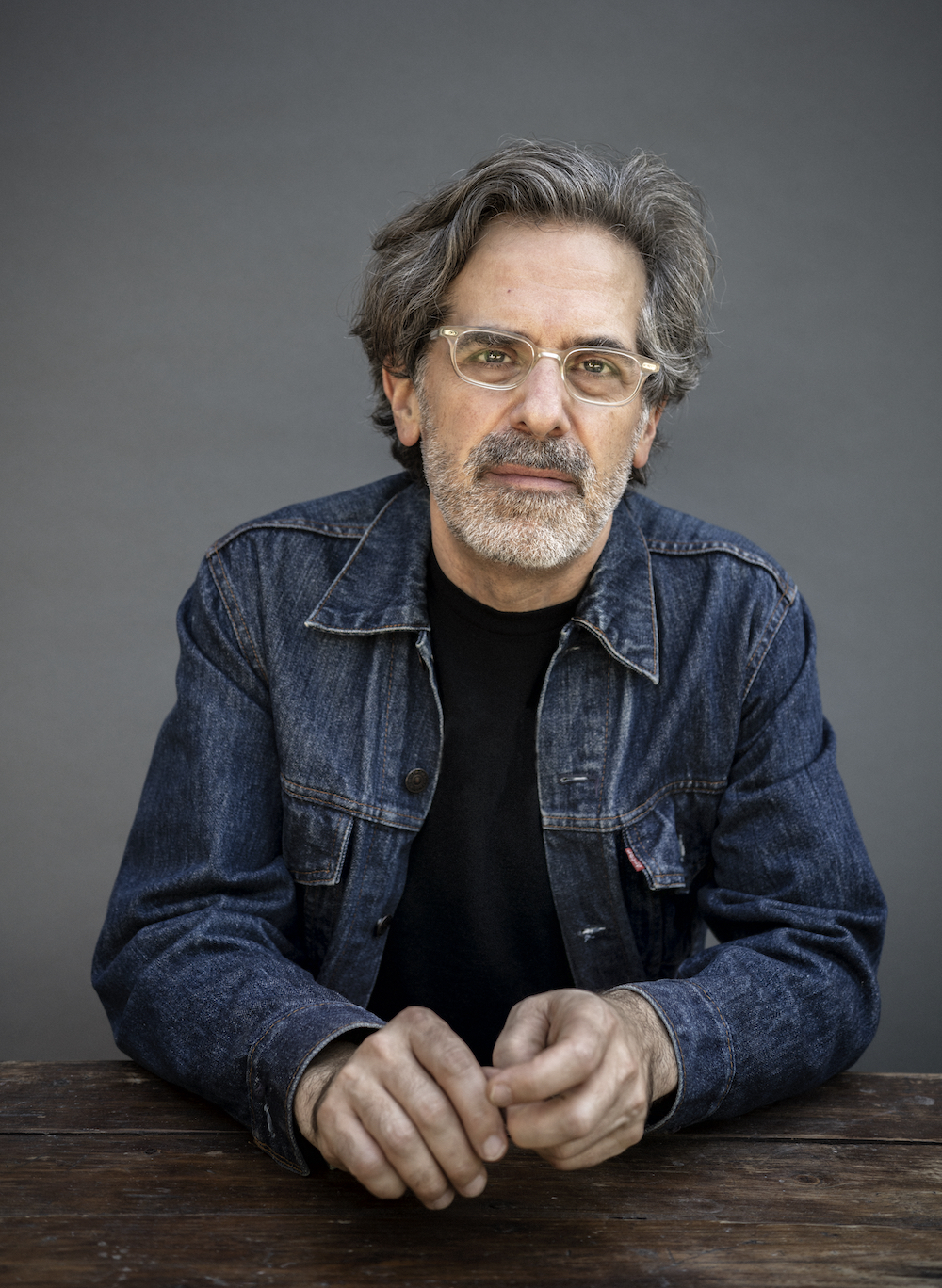 Batteries Are Not Included in Jonathan Lethem's New Dystopian Novel

Jonathan Lethem’s latest novel, The Arrest, takes place in a world where all modern technology mysteriously fails. Avenue asks him — is that dystopia or utopia?
By Brian Gresko
Photography by Rainer Hosch
L.A. STORY: Jonathan Lethem at home in suburban Los Angeles

Jonathan Lethem is a Brooklyn writer, but not in the way you might expect.

“I think of myself as the last of the old kind of Brooklyn writer, not the start of the new kind,” he tells me one recent morning over Zoom from his home in suburban Los Angeles, where he lives with his third wife, the filmmaker Amy Barrett, and their two young sons.

Though Lethem, who is now 56, grew up in Boerum Hill and is associated with the early aughts Brooklyn literary boom that included Jennifer Egan, Colson Whitehead, and a couple of authors also named Jonathan, he no longer lives in the city’s most writerly borough.

For the past decade, Lethem has taught creative writing at Pomona College in Claremont, California, occupying the post formerly held by David Foster Wallace. He has come to look the part of professor, with thick graying hair, a distinguished beard, and glasses. Early in the morning before classes he writes, and has continued publishing books at a regular pace — the latest novel, his twelfth, is The Arrest.

The move was less a decampment from NYC and more a return to the West. At the age of 19, Lethem headed across the country to quell what he called “a weird ache for desert spaces,” a longing inspired by his love of science fiction novels, hard-boiled detective tales, and Westerns. He hitchhiked the last leg, at one point finding himself desperately thumbing a ride in the very salt flats he had gone searching for.

“I was dreaming of that space and then I walked into it — I was on Mars!”

He spent more than a decade in California, working in bookstores and publishing four novels — none of which feature Brooklyn to any large extent. In fact, the majority of his books don’t. And yet Lethem is deeply connected with his hometown, because the novels that brought him to the attention of readers at large — 1999’s Motherless Brooklyn, which won the National Book Critics Circle Award, and 2003’s semi autobiographical Fortress of Solitude, a New York Times bestseller — feature the very streets on which Lethem was raised, and were written not far from them.

Both novels appeared at a time when, culturally, Brooklyn became a global brand equated with erudite hipsterdom, and Lethem’s work rode that wave.

“I didn’t know that was at my shoulder,” Lethem tells me. That he felt compelled to return to his old neighborhood at the time of Brooklyn’s ascendancy was an almost novelistic turn of events: hometown boy hits the lotto. Some of his earliest Brooklyn literary influences, authors like Henry Miller, Norman Mailer, and Robert Stone, “wanted to get the hell out of Brooklyn, not center it in their work, and certainly not brag about it.”

It’s to this group that Lethem feels an allegiance. He just happened to have reached back to his childhood for inspiration at the right time. And it could be that he’s caught lightning in a bottle again, because The Arrest concerns a subject that’s very much on our minds these days: societal collapse.

The title refers to a mysterious death of technology — screens go black, batteries fail, guns stop working — that throws the world back into an agrarian society. It’s a dystopian tale, and yet it’s set in a bucolic version of small-town Maine that’s almost utopian in feel.

Asked what drew him to this setting, Lethem again goes to Brooklyn.

“When you’re a Brooklyn kid the immediate wilderness is New England,” he replies. Family vacations meant southern Maine, where Lethem’s father, a painter, had connections to a community of artists. Of this time spent in counterpoint to city life, Lethem says, “I was lit up by it,” his voice wide with awe.

So much so that he’s spent part of every year in small-town Maine for the past two decades or so.

“It’s a part of me,” he says. “And yet my relationship to that community is qualified and peculiar. Some people recognize that I feel very at home there and other people probably think I’m the classic summer person with a house and a boat (which I don’t have, but which would be typical), unable to operate a chainsaw.”

“I’m both connected and a question mark,” he says, laughing.

The central character of The Arrest, Sandy Duplessis, a television script doctor stranded by the apocalypse at his sister’s organic farm, shares this muddled relationship to his new home. And while Lethem makes clear he is not his character, the situation Sandy finds himself in is one Lethem has considered himself.

“Everyone’s probably had this thought this year — what if our prepper friend was actually right? Well, in coastal Maine many people have generators and know how to put away food for the winter,” Lethem says. “Those skills are a thread running through the history of these communities.”

So he asked himself: What role would a novelist have to play in such a place during end times? With a smile on his face, he paints the scene for me.

“It’s like, ‘You grow the food, you keep the fire going, you clear the road, and I’ll write the novels!’ I don’t think it would take long for someone to give me the memo, ‘We don’t actually need a novel today, but we sure could use some help cleaning up the place.’”

When The Arrest opens, Sandy has put aside writing and become the town courier and butcher’s assistant, leading a life that’s quiet and largely stable. Both Sandy and the community’s peace is threatened when a wealthy television producer from Los Angeles shows up in a nuclear-powered car, like a prop from a sci-fi B movie made real.

“I’ve always had the suspicion about dystopian fiction that a lot of it is secretly wish fulfillment on the part of the author,” Lethem says.

In this case, he imagines a writer who has found solace from the fast-paced moneyed land of Los Angeles in a rural world without smartphones and social media, a calmer pace of life where storytelling, when it happens, is done around a fire, or in solitude with a book. And then, just when he thinks he’s out, L.A. tunnels up from under him. Inevitably, tensions flare.

Interestingly, this isn’t the first time Lethem has sent a character to a small town in Maine.

“I sneaked Maine into the Brooklyn-est of my Brooklyn books, Motherless Brooklyn,” he reveals. When the main character of that novel, Lionel Essrog, leaves the borough to follow a lead in the mystery he’s trying to solve, he ends up in a small Maine town not unlike the one where Sandy Duplessis lives. “That was almost like an imaginative dry run for The Arrest.”

Not long after Motherless Brooklyn’s publication, Lethem himself would start summering in just such a small town. Looking at it this way, Lethem is like Billy Pilgrim in Kurt Vonnegut’s classic Slaughterhouse-Five, a writer unstuck in space-time, exploring his childhood home just as it becomes the next big literary thing, dreaming of deserts he’d later cross, and rural towns he’d later settle in. Lethem’s reading, writing, and life choices are closely intertwined, and place plays an important role in all of them.

“I’ve projected spaces in my imagination,” he says, inspired by his reading. “Then explored those spaces in my life, and my work reflects that.”

And it all started in, and often comes back to, Brooklyn.

The Arrest will be published on November 10 by Ecco.