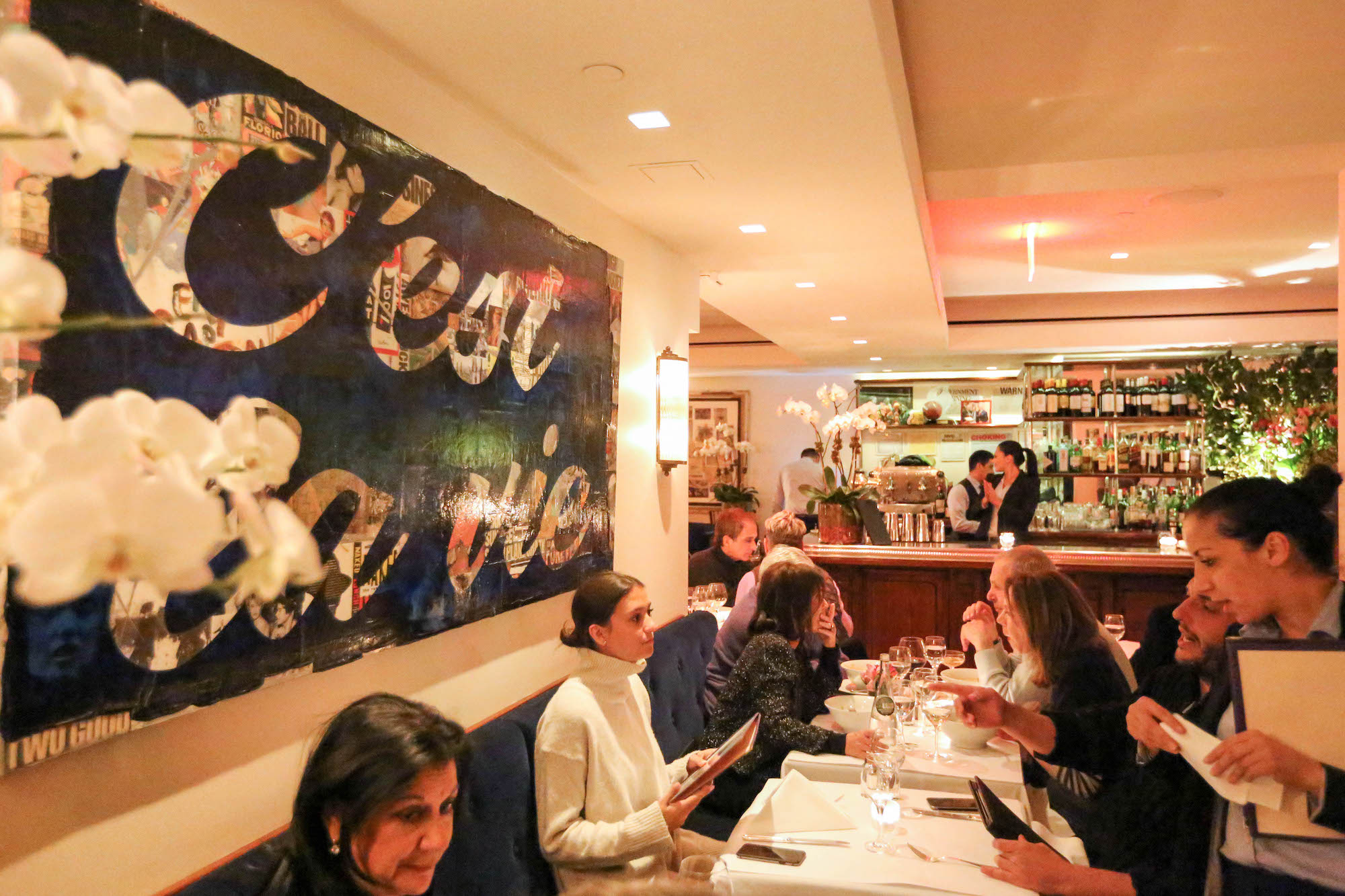 After half a century in New York, and almost four decades at the helm of Le Bilboquet, Philippe Delgrange remains its undisputed king
By Heather Hodson
RED HAUTE Le Bilboquet on the Upper East Side
Photo courtesy of Le Bilboquet

“We have incredible customers — without them I would be dead. Finished,” says Philippe Delgrange one recent morning on the telephone from his eatery, Le Bilboquet in Manhattan, the rich sounds of laughter and chatter in the background. “When we closed everything down with the pandemic, I said, it is possible that this is the end. This is really bad. But we survived.”

The pandemic underestimated his clients. “They were eating outside in the winter — in New York! I said to myself, ’ow can you stay outside, freezing? But New Yorkers are a different kind of breed. They are really tough cookies.”

Delgrange is the owner-proprietor of “Bilbo,” as it is known to the lucky few, the fabled French bistro in uptown Manhattan popular among film stars, fashion power players, and those who, in a previous era, would have been called “the Four Hundred.” It is a clubby, glamorous crowd among whom Delgrange holds considerable clout, because scoring a table at this bastion of Franco-American civility is très difficile. In a world this rarefied, wearing the wrong pair of shoes can be fatal. Delgrange has trenchant views on sartorial matters. “When you dress, you automatically take a step up,” he says. “If people come to my restaurant well dressed, it’s a form of respect, to the place and the workers.”

At 68, the leonine Delgrange is arguably the most elegantly dressed Frenchman in New York. “I dress every day,” he tells me. “I don’t wear a tie — I’ve paid my dues — but I always wear a great pair of slacks, and a shirt, white or blue.” For a man with a deep and nostalgic respect for the nuances of the good life, the recent trend toward casual dressing is, frankly, pas bon.

“People stopped dressing when the pandemic came, the only place people really dress is Palm Beach,” he says, sounding both crestfallen and indignant. “I think it’s sad. Mostly for a woman. A woman wants to dress up! She doesn’t want to feel lonely, with everyone looking at ’er.” He sighs. “Everything is acceptable now. For me, where I’m from, what I’ve learned in my lifetime, it’s very hard for me to accept that.”

Delgrange arrived in New York from Cambrai in France at the age of 18, and after a stint working in a perfume factory began his apprenticeship as a restaurateur at the Atrium Club, Regine, and later Le Relais. His front row seat at the nexus of ’70s gastronomy and glamour informed his under-standing that in New York, unlike France, dining is a pageant. By the mid ’80s he was ready to launch himself, opening Le Bilboquet on East 63rd Street, a 20-seat boite that quickly drew the fashionable Upper East Side crowd. Such was its success he transferred Bilbo to the 120-seater East 60th Street location (Ron Perelman, Eric Clapton and Steven Witkoff are investors). Delgrange is now the owner of all Le Bilboquets, including in Sag Harbor and the newly opened Palm Beach iteration. “It was an explosion!” he says of the opening. “I could not believe the number of clients of mine [from New York] living in Palm Beach.”

What Le Bilboquet embodies is a combination of traditional French comfort food uplifted by modern New York tastes. “In New York, we are more aware about food than Europeans,” he states with pride. “There is a big difference in fine dining. New York is a city of creation. The Europeans — whatever they crave, it’s been there forever. In New York — we move on.” But food aside, what Delgrange understands is that his people want to keep things the same; they want the happiness that comes from being at the center of a familiar, clubby world that, like haute couture, still prizes beauty and old-school etiquette. “Don’t try to change! People, they love their own place. It’s important to go back to the past. I think of who was here before.”

If his clientele are fiercely loyal to this ebullient, magnetic Frenchman, the sentiment is returned in more than equal measure. “The clientele are everything,” he declares. “I always have the parents, the grandparents, and the children [in the restaurant]. If you don’t take care of the grandparents and the grandchildren, you have no business. Because the grandchildren — they remember a place because grandpa used to eat there, so they will come.”

Talking about New York makes him emotional. “People are waiting for this to be over. A lot of my friends are really suffering,” he laments of the pandemic. “We have been through a very difficult time, and this is a time we have to stick together.” Think of Europe, he says: people there are desperate to come to New York. “My in-laws, they’re so depressed, they are stuck in France. They cannot wait for the borders to open. If they open up Europe, you’re going to have a big wave coming to New York.”

At the thought of all those elegant Europeans taking a flight path direct to the city, he cheers up. “[We say to them] oxygen is coming to you! A big bowl of oxygen! They will say, “Thank you, thank you!” They’ll be in heaven here! Be-cause we have one thing you don’t have anywhere else — the people! People are full of life here!” He gives a whoop. “Oh, you’re not going to believe it. It’s going to be an explosion!”