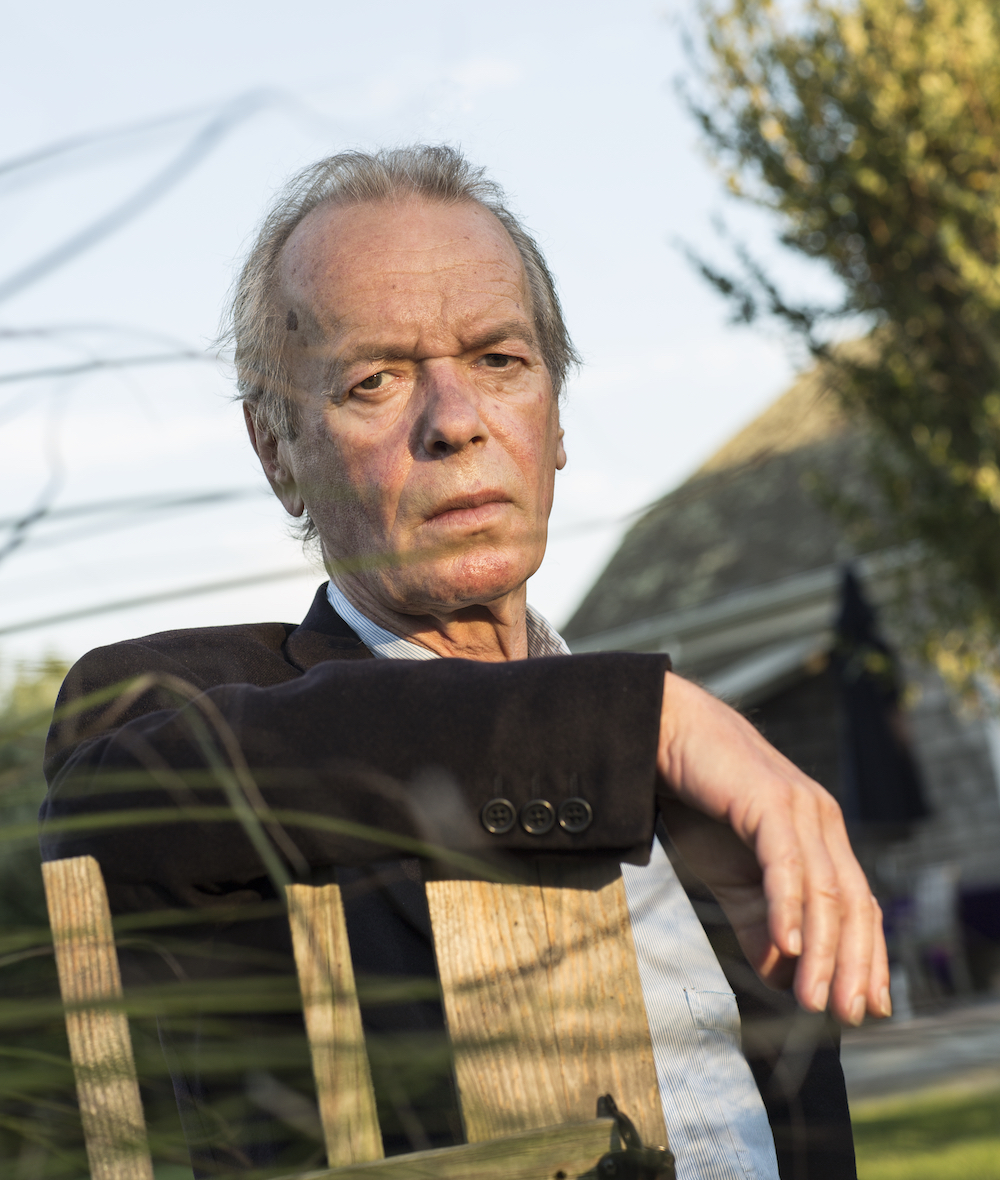 The author says the book will be his final long-form novel. Avenue speaks with him about the book that is “halfway to a memoir"
By Tom Shone
AN ENGLISHMAN IN NEW YORK: Author Martin Amis at home
Photo by Elena Seibert

“It’s a very delicate matter to decide,” says Martin Amis of the stark announcement, on page 7 of his forthcoming book, Inside Story, that it is to be his last long-form novel.

“It’s not like saying I would never accept a knighthood. I mean, Richard Ford, when he finished The Lay of the Land, said to me, ‘I’m never doing that again,’ and then the next thing he wrote, practically, was Canada, which was over 400 pages. But the fact is that writers tend to go off in their seventies. I do think Philip Roth went on a bit too long.”

Speaking via Zoom one recent morning from his wife’s family home in East Hampton, tan and tousled, graying hair swept back from his temples, Amis, now 71, speaks in his distinctively unhurried cadence — erudite, laconic, sandy with wear and tear.

It is something of a cliché among Amis interviewers to remark on the author’s passage from onetime enfant terrible to literary elder statesman, from the Jaggeresque strut and virtuouso dazzle of his early work, The Rachel Papers and Money, to the battle-scarred sagacity of London Fields and The Information.

His tennis game may not be what it was (“the ball comes over the net like a strange surprise; you just stand there and watch until, with a senescent spasm, you bustle off to meet it,” he recently wrote), but on the page he can still rely on a lethally disguised backhand slice or feather-light drop shot.

“As you get older you can of course remember what you went and did when you were younger,” he writes in Inside Story. “What you can’t remember is the temperature of the volition — of the I want.”

Expansive, elegiac, spectral with imminent departures, the novel is halfway to a memoir, bundling together a troika of deaths — his friend, critic and polemicist Christopher Hitchens; novelist Saul Bellow; and the English poet Philip Larkin — with an account of a sexual affair with a wounded brunette named Phoebe Phelps that consumed his late twenties and haunted him into middle age.

With her slender form, “lawless smile,” and air of febrile emotional damage, Phelps is a compilation reel of Amis’s girlfriends from the late seventies smelted into a femme fatale familiar from his fiction.

“I’m frightened of her, Hitch,” Amis confesses during one of the pair’s tête-à-têtes in Luigi’s Italian café in London’s Holborn, where the two decamp to chew over their escapades and imbroglios.

“As I have him say in the book, the persistence of sexual memory is very striking,” Amis tells me. “The contours of it, the high definition of those memories, must be to do with the fact that you’re never more alive than when you’re in the act. Christopher used to say to his political friends ‘It’s nice to talk about politics, because all I talk about with Mart is sex,’ and it was true.”

The only girlfriend of Hitchens to ever inspire outright envy, he writes, was Anna Wintour (“opulent, high church, sweet tooth”), who later tells Amis, “I was mad about him and he was mad about you.” That, too, is the book’s pivot. Playful and meta-fictional when it comes to sex, Inside Story’s Zuckermanesque shimmer yields as it approaches male friendship, and the beeping monitors of the critical care unit in Houston where Hitchens spent the last nine months of his life, battling cancer.

“I really brainwashed myself to believe that he was going to survive and come through,” says Amis a little sheepishly, although he stayed by his side for much of that final year, soothing him, telling stories, accompanying him to the hospital gym or while he did laps of the pool. The resulting portrait is almost conjugal in its tenderness. At one point, Hitchens accidentally brings up a mouthful of milky liquid as they hug.

“The thing insists on getting out of me,” Hitchens apologizes. “It’s nothing, my dear, it’s nothing,” replies Amis. They could be husband and wife.

“Eros is at work when you form a really firm male friendship,” he says. “My father [the writer Kingsley Amis] said to me once when he had a date with Larkin, when they were going to meet in some club or pub, that he would feel the same type of excitement as he would before visiting a lady that he was interested in — and it’s idle to deny that. That kind of physical attraction is more present with some male friends than with others, and it was definitely the case with Christopher. As he said in his autobiography, when we started being friends, we sort of fell in love. Another thing I feel slightly guilty about is that there were a few little occasions, when he obviously wanted it to be more than… I was on for.”

“You mean physical or emotional?” I ask, cognizant of Hitchens’s bisexuality.

“Both. And I should’ve had more respect for that rather than thinking, ‘This just has nothing to do with me.’ It did have something to do with me, and it was part of the friendship… You are haunted not by your achievements, they fall away, but by your sins of omission, and commission, and the things you regret.”

A few days after Hitchens died, in December 2011, Amis found himself sharing a curious elation with his widow, Carol Blue. “The love of life of The Hitch… has in part transferred itself to us,” he notes.

For all its shards of regret, the book feels buoyed by the ample life Amis has built for himself since moving from London to New York in 2011 with his second wife, the writer Isabel Fonseca, with whom he has acclimatized to the unfamiliar sensation of “waking up happy.” He writes of the “sensory pleasure” from the physical presence of his five kids and now two grandkids.

Even the fire that gutted the top floor of their brownstone in Cobble Hill on New Year’s Eve 2016, like “the last kick in the arse of 2016,” is grist to Amis’s comic mill, as “ten huge Darth Vaders yelling GET OUTTA HERE! GET OUT! GO! GO! GO!” unleash a “gigaton” of water on the upper stories of their house, while Isabel, on the phone from Florida, asks if they could please remove their boots.

“It was quite a considerate fire,” says Amis fondly. “It started on the top of one floor and then it went out. What ruined the house was the water. Americans are amazed that the insurers were not at all recalcitrant. So we came out of it undamaged financially. We’ve bought somewhere else now.”

That somewhere is a smaller apartment on the 20th floor of a skyscraper in downtown Brooklyn, where he and Isabel have adjusted to life without their two daughters, 23-year-old Fernanda and 21-year-old Clio, both now in college. From their lofty perch, they have seen the sidewalks empty and then fill again as pandemic and protest have rocked the city.

“We haven’t been struck down yet, but we’ve just been like everyone else having this extraordinary readjustment to the disappearance of society,” he says.

“It’s amazing how topical it goes on being. Why is the hatred still white on black and not black on white? It can only be explained by a dirty conscience. Yeah. There’s no shortage of interest, but it’s like that Chinese saying ‘May you live in interesting times.’ After everything this year, I see it as being a bit too interesting… But it’s not a reason to leave. Where would you go?”

Inside Story will be published on October 20 by Knopf.