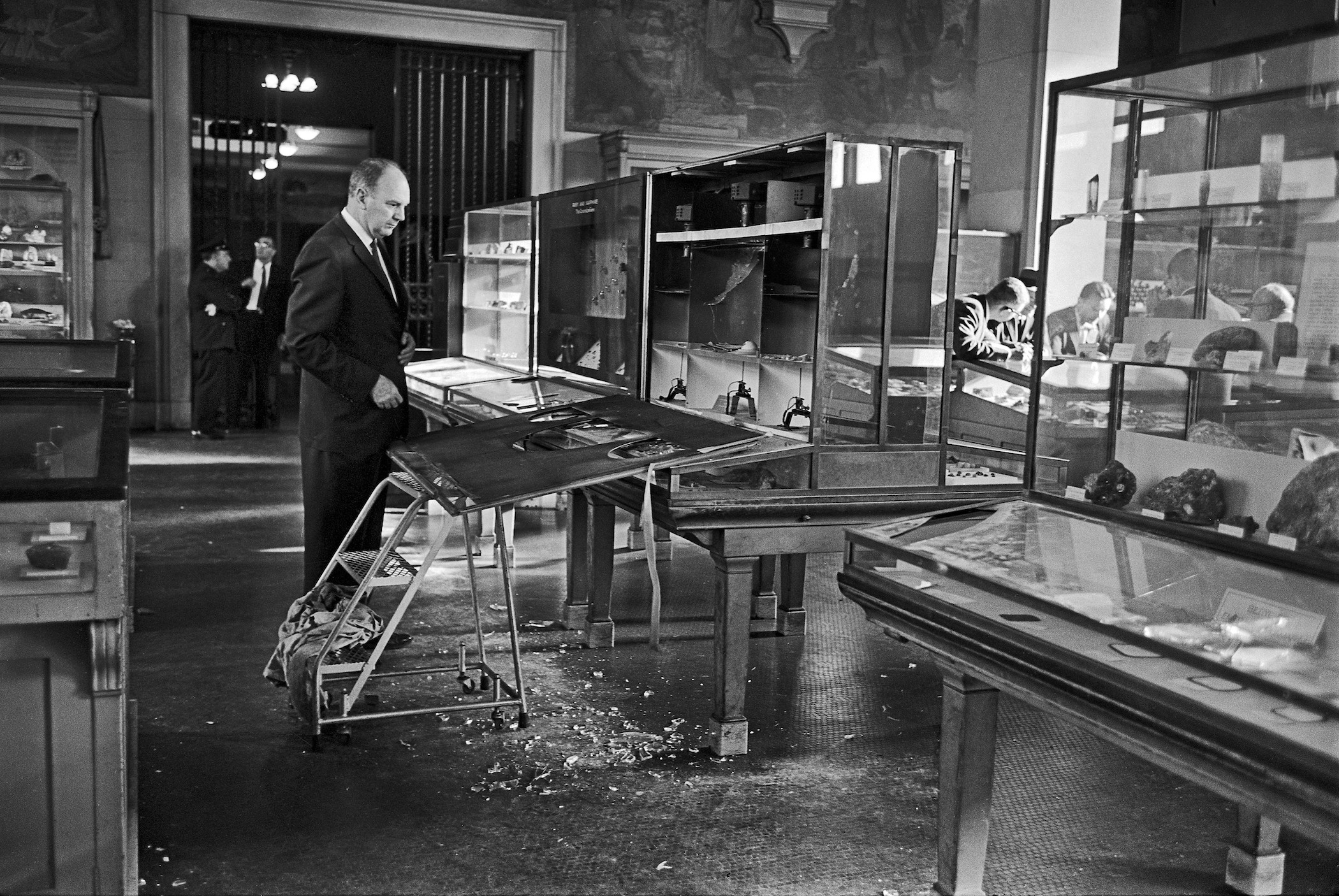 A night at the museum
By Ambrose McGaffney
OPEN AND SHUT CASE James A. Oliver, the director of the American Museum of Natural History, inspects the damage
Photo by Arthur Brower/The New York Times

On the waterfront lawn of a Miami mansion, on a balmy afternoon in early 1964, Jack Murphy and his criminal accomplice, Allan Kuhn, sat on the edge of a pair of sun loungers. Handsome and tanned, they were meeting an underworld figure named Max to fence a $20,000 diamond ring recently stolen nearby. Two decades before the opening credits of Miami Vice, they had worked out that speedboats made excellent getaway vehicles when the men were burglarizing wealthy homes along the Intracoastal Waterway.

That day, however, Max had a proposition.

“There’s this customer I occasionally refer to as ‘a gentleman from Peru’ — there’s a little item he wants,” he said, his belly barely contained by a spa robe. “But it’s going to take some real nerve.”

“Then you’ve come to the right man,” Kuhn replied coolly.

“He wants the Star of India,” said Max. “Your share would be considerable.”

That’s the fictional scene, 16 minutes into the 1975 film Live a Little, Steal a Lot, that sets up the most daring real-life jewel heist in New York City history. Murphy — a charismatic villain who became immortalized in the tabloids by his nick-name, “Murph the Surf ” — and Kuhn would steal two dozen rare stones from the American Museum of Natural History, including four headliners: the Star of India, a 563-carat, golf ball-sized sapphire; the 100-carat DeLong Star Ruby; the 116-carat Midnight Star black sapphire; and the Eagle Diamond, a gobstopper discovered in Wisconsin.

The glamour of the heist was such that Murphy achieved an antihero status in popular culture that overshadowed his later, more heinous crimes. His celebrity grew to the point where the film was rereleased as Murph the Surf, even though its story gives more agency to Kuhn, who consulted on the project and is played by Robert Conrad, the leading man. Don Stroud plays Murphy, ably assisted by Donna Mills in a succession of colorful bikinis.

Like all great con artists, Murphy wove multiple strands of myth through the facts of his early life. Among the achievements he claimed, according to the New York Times, were that “he had been a concert violinist with the Pittsburgh Symphony at 18, a star athlete who won the University of Pittsburgh’s first tennis scholarship, and a two-time national surfing champion.” Fact-checking these claims after his death from natural causes in September of last year, at the age of 83, the paper’s verdict was, in order: “there is no record of it,” “probably,” and “perhaps.”

Public records paint a picture of Murphy as a California native who dropped out of college and hitchhiked to Miami Beach. There, he worked casual jobs suiting his athletic prowess, including as a swimming and tennis instructor, and even a high-board stunt diver. Kuhn, a local scuba diver whose speedboat came in handy for his night job breaking into houses, apprenticed him into crime.

With a third friend, Roger Clark, the men were drawn to Manhattan in the fall of 1964 simply because it promised richer spoils, and not at the behest of the invented Max. They threw all-night parties at the Cambridge House Hotel on West 86th Street, funding their lifestyle with small-scale robberies.

Even these sunburned party boys, however, were astute enough to notice the nearby museum’s Hall of Gems had less-effective security than the average toddler visiting Central Park with her nanny. The guards were few and elderly; the burglar alarms hadn’t worked in years; and the windows were propped open at night to let air circulate.

“Allan said he could hear the jewels talking,” Murphy told the Times. “He said, ‘The jewels are saying, ‘Take us to Miami.’ So I said, ‘Well, let’s take them to Miami.’”

On October 29, with Clark as lookout, Kuhn and Murphy scaled an iron fence behind the museum. That got them to a fire escape, which took them to a ledge. They carried an airline bag full of tools, a pistol, and a coil of rope, which they used to lower themselves through an open window into the Hall of Gems.

“I wasn’t surprised at all that they were left open,” Murphy said. “I don’t think the museum ever expected anyone to get up there.”

Once inside, with knowledge of the guards’ infrequent rounds, they spent several undisturbed hours scoring the cases with a glass cutter, smashing through with a rubber mallet, and sweeping up the shards as they went along. The eventual haul included around two dozen loose stones and pieces of fine jewelry, including sapphires, diamonds, emeralds and aquamarines. (Although the gems were often described as “priceless,” in the sense they were irreplaceable, the actual value of the theft was estimated only at $410,000, or about $3.3 million today.)

Despite making a clean getaway, this beach bum gang from Miami quickly proved they were no criminal masterminds. Acting on a tip from a suspicious clerk, cops raided their hotel room, which contained the kind of incriminating evidence rarely found outside comic book detective stories — including, per the Times, “a museum floor plan, brochures on its gem collections and sneakers with glass shards on the soles.” Clark walked in on the police, confessed immediately, and told them Murphy and Kuhn had taken the loot to Miami. All three were arrested within 24 hours.

Despite the crooks’ speedy apprehension, the gems had already been dispersed. The Star of India and Midnight Star were recovered from a Miami bus station locker, after having spent some time stashed underwater in Biscayne Bay. The DeLong Star Ruby stayed missing for another year, until John D. MacArthur, a museum benefactor, privately paid a $25,000 ransom to recover it from a highway telephone booth just outside Palm Beach. The Eagle Diamond, which investigators suspect was cut into smaller stones, was never seen again.

Today, the Star of India, Midnight Star, and DeLong Star Ruby can be visited at the museum’s Allison and Roberto Mignone Halls of Gems and Minerals, which reopened in June after an extensive, three-year redesign. You’ll be relieved to hear they got rid of the windows.

Murphy, who cooperated with Manhattan prosecutors to recover the gems in exchange for leniency, served less than three years. In 1967, he conspired with two secretaries at a California brokerage to steal $500,000 in securities. With those in hand, he and another man killed both women and dumped their bodies in a South Florida waterway — after luring them with the promise of a moonlight speedboat ride.

While serving a life sentence for that, he found religion and began preaching to his fellow inmates. After parole in 1986, he resumed surfing and gained a measure of renewed celebrity for his prison ministry, speaking often at conferences and in the media.

Getting closer to the divine certainly seems to have eased Murphy ’s conscience about his sins: the brutal double murder gets no mention either in his 1989 memoir, Jewels for the Journey: Murf the Surf, nor in the film. In its last scene, reporters mob a handcuffed Conrad (as Kuhn) and Stroud (as Murphy) at a Manhattan courthouse.

They both pause, presenting their best angles as photographers bathe them in flashes. Kuhn replies suavely: “He’ll think of something.”

Mugrabi Divorce Settled: "She Asked for $100 Million"
Recommended for You
City Life
New Yorkers Flock to The Gramercy Park Hotel's Liquidation Sale
City Life
Douglas Friedman, It Boy of the Design World, Has a New Show in NYC
City Life
The Exceptional — and Experimental — Italian Restaurants Shaking Up NYC