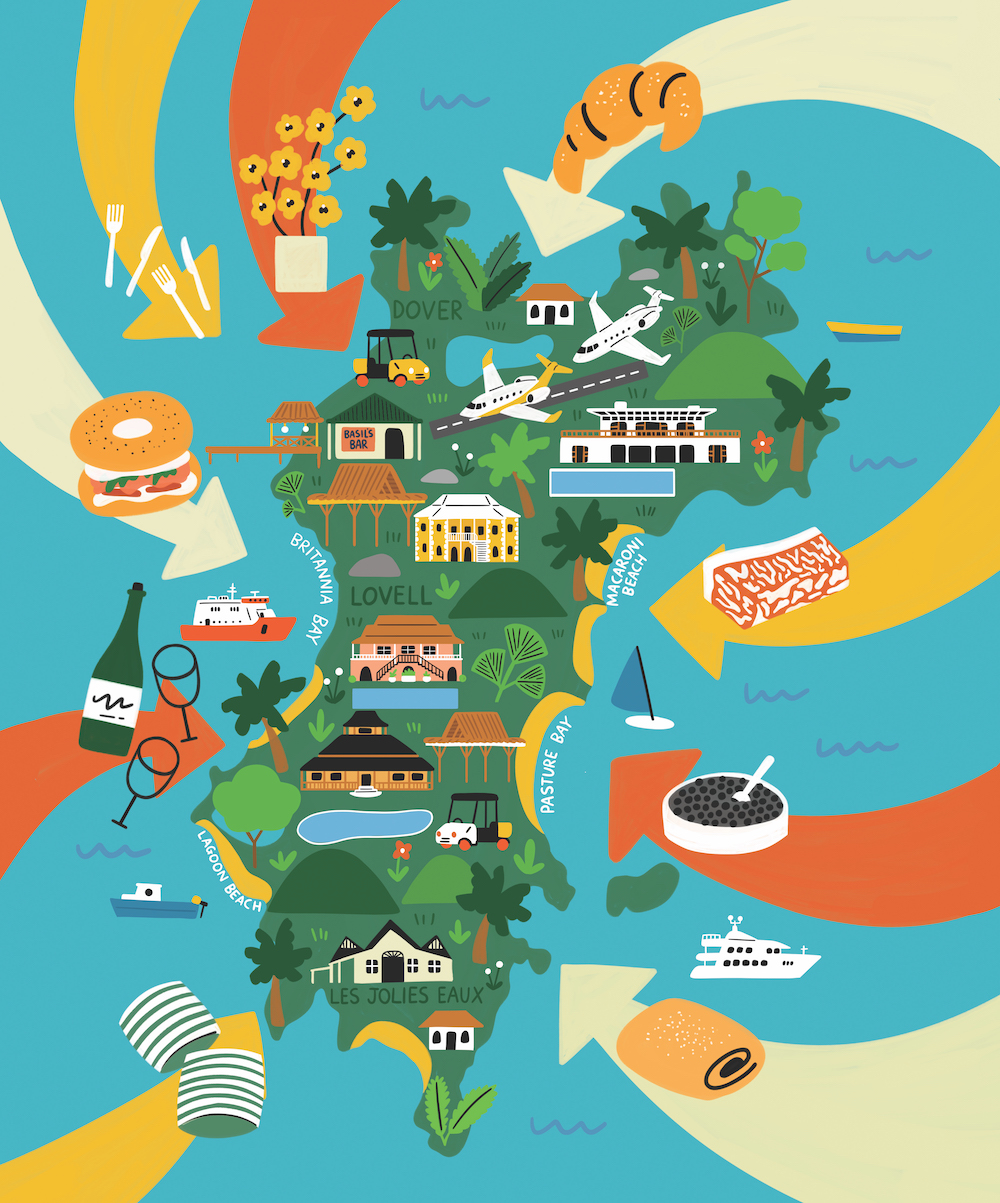 In Mustique, Beach Picnics Are the New Social Battlefield
Living

In Mustique, Beach Picnics Are the New Social Battlefield

As new money competes with old in this Carib-Eden, this once-genteel tradition has become the new social blood sport
By Brandon Presser
Illustration by Fuchsia MacAree

“I hate the sand,” snorts Samantha Chartouni while handing me a sesame seed bagel. “I have a vivid memory of being on holiday by the beach in South Africa as a child — the wind picked up and my sandwich became crunchy.” It’s the sunblock too: “the goopy stuff your parents put on you, the way it cakes the sand on. It’s almost impossible to get the damn stuff off!”

That hasn’t stopped Samantha, originally from Scotland, and her husband, Nabil — co-owners of the Lowell Hotel in Manhattan — from adding a beachside property to their real estate portfolio, which includes a Tudor-style compound in Greenwich, Connecticut, and a rambling Haussmannian apartment in Paris’s 16th arrondissement. Four years ago, the Chartounis purchased Paraiba, a lavish estate on Mustique, and joined the island’s illustrious new guard.

Over the past decade, Mustique has increasingly become the canvas on which the world’s elite have painted their paradisiacal dreams — rambling tropical villas each elaborated according to its owner’s ultra-specific tastes, from faux Moorish palaces to angular temples of modernism. It’s a palpable departure from the island’s no-frills past as a low-key getaway for runaway royals and rock stars. Inevitably, this infusion of new money and people has ruffled some feathers among the old guard, even if residents would never squabble in person.

But this Caribbean Eden boasts a unique and unexpected theater of war. In Mustique, social skirmishes play out over a misleadingly genteel pastime: the beach picnic.

These days it can be hard to imagine this most coveted of destinations was once a backwater of thirsty succulents and stagnant ponds — though “Mustique,” a derivation of “mosquito” in French, certainly hints at its origins. The island was once a wasteland, relative to the neighboring Grenadines, when British noble Colin Tennant bought it in 1958 as farmland to produce cotton and meat. Those plans were soon scrapped, however, and a gift of ten acres to Princess Margaret on her wedding day in 1960 definitively reoriented the island’s appeal. The jet set soon followed with the likes of David Bowie, Mick Jagger, Bryan Adams, and later Tommy Hilfiger and Shania Twain, all buying homes. Even today, Mustique is only accessible by private jet or the island’s exclusive charter service.

“Some of my most cherished memories are of the old Princess Margaret days,” recalls Tatiana Copeland, who, along with her husband, Gerret, are decidedly old guard, having added Toucan Hill to their collection of homes (which includes a winery in Napa) roughly 40 years prior. “Hosting everyone at my place to watch the sun set at our feet is a cherished highlight.

“I used to go to Tuesday night cocktails at the Cotton House (the island’s only inn) — a tradition — with a blank piece of paper in my purse,” Tatiana continues; by the end of the evening it would be completely filled with a long list of invitees for upcoming parties she’d throw. She readily notes that like-minded conviviality has always blown on Mustique’s breezes — since, let’s face it, most Mustiquians could each afford to hide away on their own private island instead.

But in more recent years, an invitation for drinks or dinner has turned into a tacit sport: villa one-upmanship. Gone are days of ramshackle charm — the brine-scented wind chewing the edges off plantation shutters; now it’s all about perfectly manicured iterations of island idyll. Whether it’s a Tuscan retreat, concrete-slabbed minimalist expression, or a classic Cape Cod–style residence, all new flourishes of architectural braggadocio are met with scrutiny from more senior residents of the island as their roofs poke over the fronds, altering vistas of the island’s craggy clefts.

Each new arrival reconfigures paradise in their own image. Samantha’s version is a Mexican fantasy, she explains; Paraíba is a brilliant blue tourmaline stone found predominantly in Latin America. True to its name, she has enhanced the property since its purchase with concentric water features that gleam aquamarine in the Caribbean sun. A full renovation of all bedrooms, plus the addition of a state-of-the-art gym, are par for the course for any new-owner refit, and the OGs have kept pace with the luxurious new standards. Tatiana’s manse is a meticulous tribute to Moorish style, with gleaming white walls, arabesque arches, and bathrooms styled like Moroccan hammams.

The one uniting style element that binds the hundred-plus properties on the island is a dash of anonymity. “I want everyone to feel as though they are home,” explains Samantha; only a handful of homes have family photos on display, for example. This is done to ensure maximum rentability — like Samantha and Tatiana, most owners count their Mustique enclave among a coterie of international addresses and compete to lease their manses out to prospective holidaymakers, helping to offset their hefty costs. A weeklong stay in winter at Toucan Hill will set you back $40,000; Paraiba starts at $60,500 in high season.

But with owners unable to properly flaunt their homes as Covid rages on, the once relaxed tradition of meals along the beach has lately assumed a new importance to Mustique’s social calendar. Picnics are now the de rigueur house party proxy, and a new source of unspoken tension as the polite but ruthless game of one-upping thy neighbor shifts away from the turrets, cloisters, and pergolas and down to the wave-swept sand instead.

It was at one of the Cotton House’s signature cocktail hours that I first met Samantha; she invited me out for breakfast the next morning. With perennially pleasant weather to blow those resident moustiques away, she, like most of the island’s homeowners, does her entertaining outside.

“There are around 25 picnic zones,” Samantha explains, which may sound like a lot for a hundred families, but during the holiday season, jockeying for a site can quickly turn into a blood sport. “Everyone wants the same spots,” continues Samantha — “especially ‘Lagoon 1,’ ‘Lagoon 2,’ and ‘Macaroni 3.’”

The Mustique Company, the benign bureaucratic dictatorship that manages the island, governs a coveted sign-up sheet to disperse residents across the many picnicking locales and prevent party gridlock. Attempts to book multiple sites to provide options in the event of an unfavorable wind, or to block rivals and ensure that one’s own fiesta is well attended, are not technically allowed, forcing ambitious hosts to get creative.

“Normally I get the places I want because I plan,” Samantha says. “I’m always 10 steps ahead.” But she has a workaround in case another wily villa owner has snatched a spot out from under her: “I just bring my own tables and chairs, and have my staff build a temporary cabana.” Samantha has an entire storehouse at Paraiba stuffed to the gills with her fish-themed accoutrement; “I used to throw picnics halfway between ‘Lagoon 1’ and ‘Lagoon 2’ and the parties were so popular that Mustique’s reservation office created ‘Lagoon 1.5’ to block me!”

But Samantha doesn’t need the best slice of sand to maintain her unofficial status as the doyenne of Mustique’s picnic scene. “The secret is abundance,” she notes. “I have everything that I — or any guest — would ever need shuttled down to the beach for the day.”

My sesame bagel, Samantha explains, has been flown in by private jet from her favorite American supplier (scandalously, that’s not a New York deli, but Bagels Etc. of Washington, DC.) It’s served with the requisite schmear of cream cheese, capers, smoked salmon, and fresh tomato, all served on green lacquered dishware that matches her cactus-clad caftan. My authentic bagel is an easy lift for Samantha; she also had croissants and pains au chocolat from her favorite Parisian pâtissier, Cédric Grolet, at the ready in case I crave something more decadent. Her dinners feature anything the heart desires, from Wagyu beef to caviar, as well as the elaborate settings to match.

“I have six sets of perfectly coordinated picnic-ware, and a seventh one I just recently bought,” flexes Samantha, the style maven of the Chartouni household; her favorite is a blue fish motif that undoubtedly comes with a matching caftan, too. “And I’m going to Maison & Objet [in Paris] to get more;” she adds. Samantha usually hosts three gatherings a week — “two lunches and a sunset dinner” — while on island, and she loathes the notion of repeating motifs.

Samantha’s seven-plus sets of dishware can each serve up to 30 guests, all of whom sit comfortably on tailor-made cushions specifically stitched for the wooden benches inhabiting each station. “And none of the picnic tables are the same, so I have several sets of bespoke pillows that fit all of the different sizes,” she adds. A temporary shower, strung up in a nearby tree, is another Chartouni staple, as is a lounging area replete with kilims, a tent for shade, and a raft of water sport supplies, like snorkel masks and fins.

Now that the picnic stakes have risen, the old guard has felt pressure to keep up with the new. “Most houses have a butler and cook; we, however, also have a manager,” says Tatiana. “She’s from New York and has a keen eye for turning the provided empty tables into lavish barefoot banquets — she’ll also decorate the public palapas in orchids or balloons depending on the occasion.”

To an outsider, this might all look like fierce competition. But our hostesses clutch their caftans at any suggestion of social rivalry.

“It’s not that I’m competitive,” Samantha says, “it’s just how my mind operates — everything needs to be just so.” And she would know; when the Chartounis aren’t bringing their hotel savvy down to the seaside, they’re regular attendees at the many other gatherings around the island. “I think we get a lot of picnic invitations because the hosts know I’m happy to share my gear,” Samantha says. She will, however, admit to having one sworn enemy on the island: sand. For four years and counting, Samantha’s feet have never touched even a grain of Mustique’s signature mixture of shells, pebbles and mud. “God knows,” she says, “I never go anywhere on island without my carpets and beach shoes.”