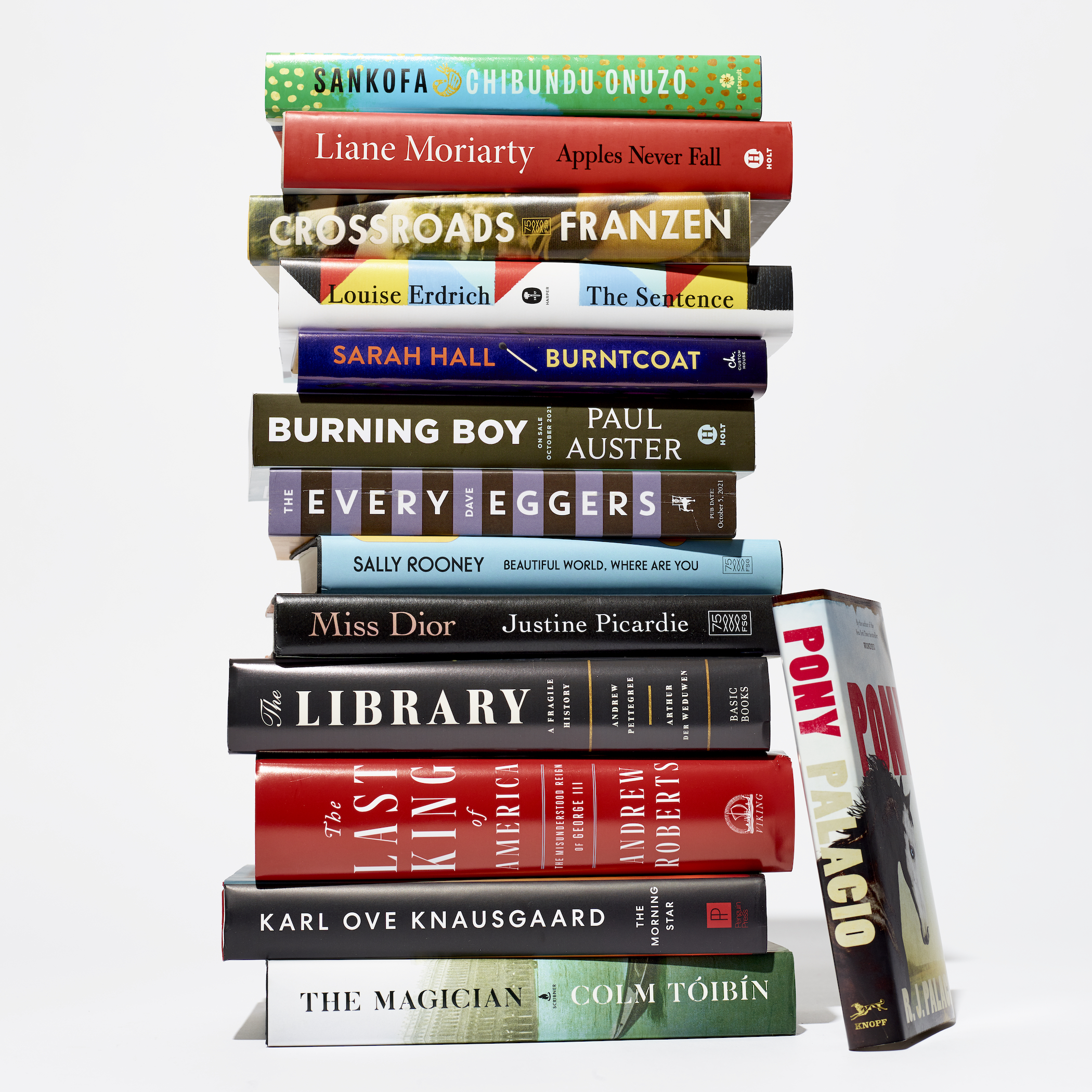 Rooney, Eggers, Franzen, and More: 14 of the Best New Books

Ghost stories, family sagas, and true tales of courage to wrap up with ribbon
By Heather Hodson
Photo by Jens Mortensen

R.J. Palacio’s debut, Wonder, the tale of a ten-year-old with a facial deformity, was one of those rare novels that appealed to both adults and children with its themes of friendship and loyalty, suffering, and overcoming public opprobrium. In this tale of a young boy’s quest to find his father by traveling across the vast landscape of America, she has produced another.

The literal translation of the word sankofa, an African word from the Akan tribe in Ghana, is “It is not taboo to fetch what is at risk of being left behind.” With her third novel, the award-winning London-based Nigerian writer examines themes of identity, home, race, and belonging through the compelling story of Anna Bain, a woman in her fifties who goes in search of the African father she has never known.

The Australian novelist sells books in the tens of millions, such is her talent for noirish thrillers about contemporary middle-class life. Her latest offering is a creepy, intricately plotted whodunit set in the prosperous Sydney suburbs that turns on the sudden disappearance of Joy Delaney, a recently retired tennis pro, the wife of Stan, and the mother of four adult children.

Franzen’s dazzling new novel takes place over the course of one day in December 1971 as members of the Hildebrandt family each find themselves at a point of moral crisis, with the counterculture movement of the new decade humming in the background. This is the first volume of Franzen’s trilogy, A Key to All Mythologies, the name a sly allusion to Middlemarch, and like George Eliot, Franzen’s use of the novel to examine the way we live now is nothing short of genius.

THE SENTENCE
by Louise Erdrich (Harper)

Tookie, an Ojibwe woman recently released from prison, an experience she survived by nonstop reading, works at a small bookstore in Minneapolis during the pandemic. There she and her colleague have to contend with being haunted by the ghost of the store’s most irritating customer. This profound, emotional, and extremely funny ghost story is the latest from Erdrich, whose The Night Watchman is the most recent recipient of the Pulitzer Prize for Fiction.

The author of the acclaimed The New York Trilogy has been described as East Coast meets Left Bank, such is his accessible intellectualism. So it’s not surprising that Auster’s biography of The Red Badge of Courage author Stephen Crane, whose brief life lit up fin de siècle America like a meteor shower, is both gripping and illuminating.

THE EVERY
by Dave Eggers (McSweeney’s)

The editor of literary magazine McSweeney’s and author of the best-selling The Circle revisits themes of mind control and the destructive power of monopolies with this tale of a tech skeptic named Delaney Wells, who tries to bring down an e-commerce-meets-social-media entity called The Every. Eggers, who views Amazon with enmity, has ensured that the novel’s hardcover will only be sold through independent bookstores.

BEAUTIFUL WORLD, WHERE ARE YOU
by Sally Rooney (Farrar, Straus & Giroux)

What happens when a literary author turns into a household name before she’s even 30? Rooney’s latest novel, written in the aftermath of her teenage rom-com phenomenon Normal People, is an answer of sorts. While the plot is propelled by the love quadrangle of twentysomethings Eileen, Simon, Felix, and Alice, it is Alice, a prize-winning author given to ruminations on the point of literature and the guilt that accompanies success, who occupies the center of the novel.

A haunting and engrossing account of the little-known life of Catherine Dior, the sister of the French couturier and a Resistance fighter, who survived Ravensbrück and later inspired the family atelier’s first and most beloved perfume. Picardie, the author of a biography of Coco Chanel, moves deftly between the horrors of wartime and the creative explosion of postwar Paris, making the case for fashion as a force for renewal.

Antiquarians and athenaeum obsessives, philanthropists, manuscript thieves, and rival private collectors — such is the cast of characters in this fascinating history of the library, in its many gold-leafed, frescoed incarnations both ancient and modern.

THE LAST KING OF AMERICA
by Andrew Roberts (Viking)

Whether the raving porphyria sufferer of Alan Bennett’s play The Madness of George III, or the figure of fun of Lin-Manuel Miranda’s Hamilton, the last monarch to rule America has had a bad rap ever since Thomas Paine and Thomas Jefferson persuasively portrayed him as evil. After poring over hundreds of thousands of pages of previously unpublished correspondence, the award-winning historian Andrew Roberts makes a compelling case that George III was in fact a humane monarch besieged by mental illness and brilliant enemies.

In the Norwegian author’s first new novel since his epic six-volume autobiographical work My Struggle, a strange new star appears one Scandinavian night, a portent of metaphysical things to come for the book’s nine characters. All the ingredients of the best of Knausgaard are here — the existential fears, the mundanities of domestic life — but with a delightful dose of magical realism.

THE MAGICIAN
by Colm Toíbín (Scribner)

Toíbín’s magnificent new novel about the life of Thomas Mann, author of Death in Venice and The Magic Mountain, whose permanent exile from Germany began in 1933 when he fled Munich with his Jewish wife, Katia, and their four children, is a compulsively readable tale of flawed genius and a culture in decline.