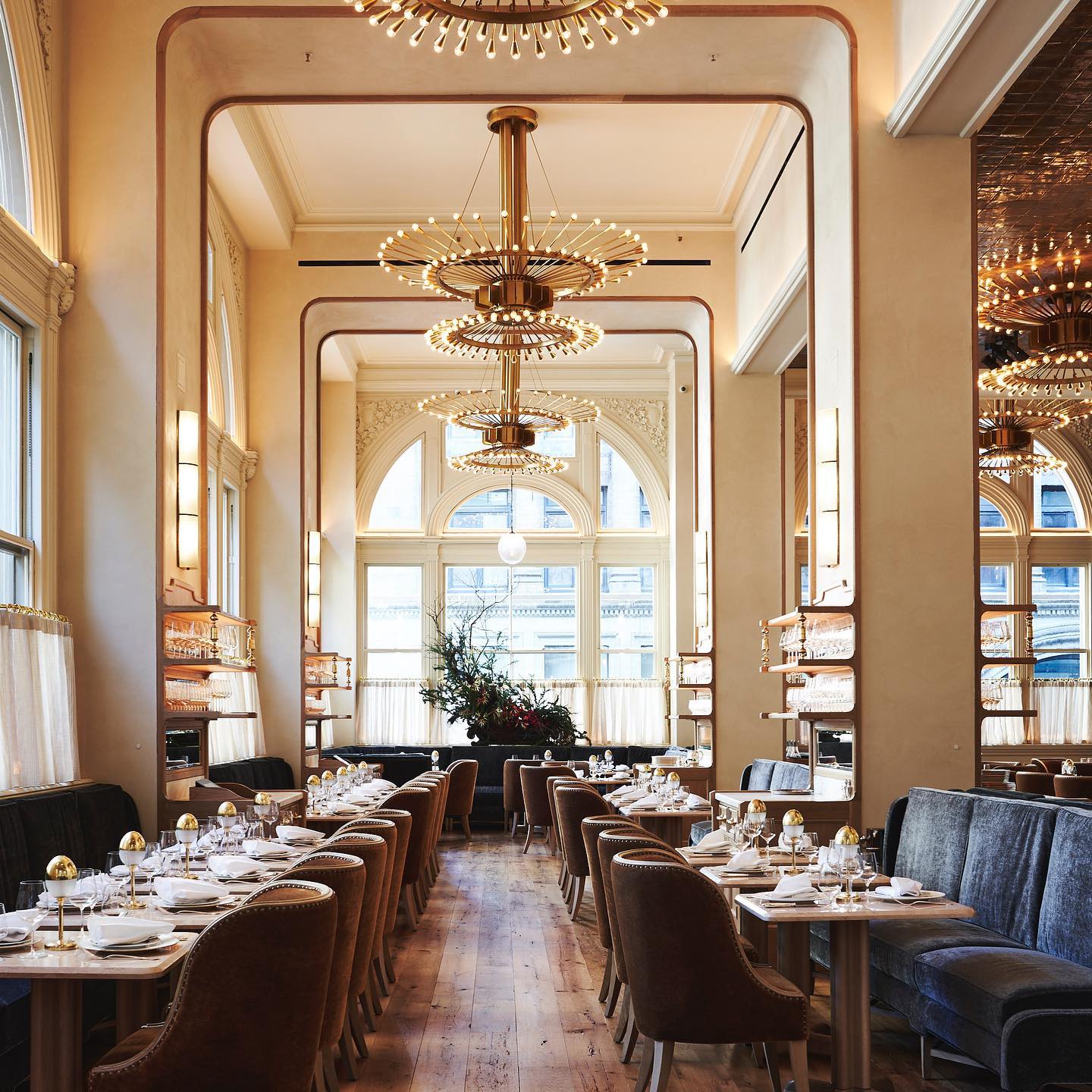 Where the Fashionable Set Dines and Unwinds
City Life > News

Where the Fashionable Set Dines and Unwinds

Top off your nonstop schedule of fashion shows with a drink at Ralph Lauren's Polo Bar.
By Maggie Maloney

Balthazar, Keith McNally’s French brasserie in SoHo, has hosted numerous Fashion Week events in its day: it’s the usual post-show spot for Victoria Beckham when she shows during NYFW, and was the scene for Calvin Klein’s starry perfume launch in 2018. The New York establishment is a frequent haunt of editors, stylists, and models, but you’re just as likely to find locals dining alongside these fashion heavyweights at any given time.

What better way to celebrate fashion week than dining at an iconic designer’s restaurant? Ralph Lauren’s midtown staple The Polo Bar seamlessly combines style and fine dining. The menu is filled with classic picks like shrimp cocktail, pigs in a blanket, and the legendary Polo Bar Burger. If you have an uptown fashion show on your agenda, the Polo Bar is an ideal next stop.

Jacques Bar at the Lowell Hotel at 28 East 63rd Street

The elegant Jacques Bar at the Lowell Hotel attracts the stylish uptown set–and is conveniently away from the crowds downtown. For previous New York Fashion Weeks, Jacques Bar created designer-inspired cocktails, like the Coco, which pays homage to Coco Chanel, and the Majorelle Garden Iced Tea, in honor of Yves Saint Laurent, for an extra special way to celebrate the most stylish week on the New York social calendar.

The Blond at 11 Howard Street

Situated in the 11 Howard, The Blond is the cool girl’s go-to for drinks downtown. During Fashion Week, the space is buzzing with private events, but you’ll also find yourself yourself bumping into off duty models as you order a drink. Plus, it’s walking distance from Spring Studios, which is where many NYFW shows are taking place.

Sant Ambroeus attracts a fashionable crowd at their various locations throughout New York, but during Fashion Week the SoHo location is buzzing. Guests come for the delicious Italian food and unbeatable coffee and pastry options, but stay for the Instagram-worthy interiors and top notch people watching.

The Rose Bar at 2 Lexington Avenue

The Rose Bar at the Gramercy Park Hotel is a frequent locale for designers, muses, and models. The venue has hosted Fashion Week after-party events in the past, including one for Rebecca Minkoff, while Narciso Rodriguez and Prabal Gurung have also thrown fashionable soirées in the spot, which features art by Andy Warhol among the cozy velvet-covered interiors.

As soon as Fashion Week arrives in New York, you’ll find a flurry of models posting about infrared sauna spa HigherDose on Instagram. Other than the spa’s signature infrared treatment, guests can also receive cryofacials or lymphatic drainage––services that are frequently enjoyed by celebrities like Bella Hadid, Lea Michele, and Nina Agdal. With various locations around the city, there’s a convenient spot for everyone to indulge in a little model-approved wellness.

Joanna Vargas Skin Care‘s flagship spa in New York is the ultimate spot for some rest and relaxation during NYFW. The name Joanna Vargas is probably familiar: you’ve likely seen some of your favorite celebrities posting Instagrams before, during, and after one of her treatments–famous fans include Naomi Watts, Mindy Kaling, and Amber Valetta.

Jin Soon spa locations are in the East Village, West Village, Upper East Side, and Tribeca

Odds are high that you’ve seen the work of nail care guru Jin Soon on the runway at New York Fashion Week: Soon has been responsible for nail art as seen on models at recent Coach, Michael Kors, Tibi, and 3.1 Phillip Lim shows. With four Jin Soon hand and foot spas across New York, you can snag a bit of Soon’s designer-approved treatments for yourself to unwind.

Tracy Anderson‘s studios are in Midtown and Tribeca

Tracy Anderson has built a cult-like following in the world of fitness thanks to her upbeat exercise classes. Anderson counts Gwyneth Paltrow as a friend and client, while top models like Alessandra Ambrosio have also tried one of Anderson’s classes. With two signature studios in New York (one in Midtown and one in Tribeca), you can pop in for a class as your NYFW schedule permits.

Dr. Barbara Sturm’s boutique and spa is located within Zero Bond at 670 Broadway

With famous fans like Emma Watson, Rosie Huntington-Whiteley, and Cher, Dr. Barbara Sturm’s highly in demand treatments finally arrived stateside last year when Dr. Sturm officially opened her first boutique and spa in New York. Located within Zero Bond, the space was modeled after her primary clinic in Dusseldorf, Germany–and the New York spot will no doubt be filled with famous faces during Fashion Week.