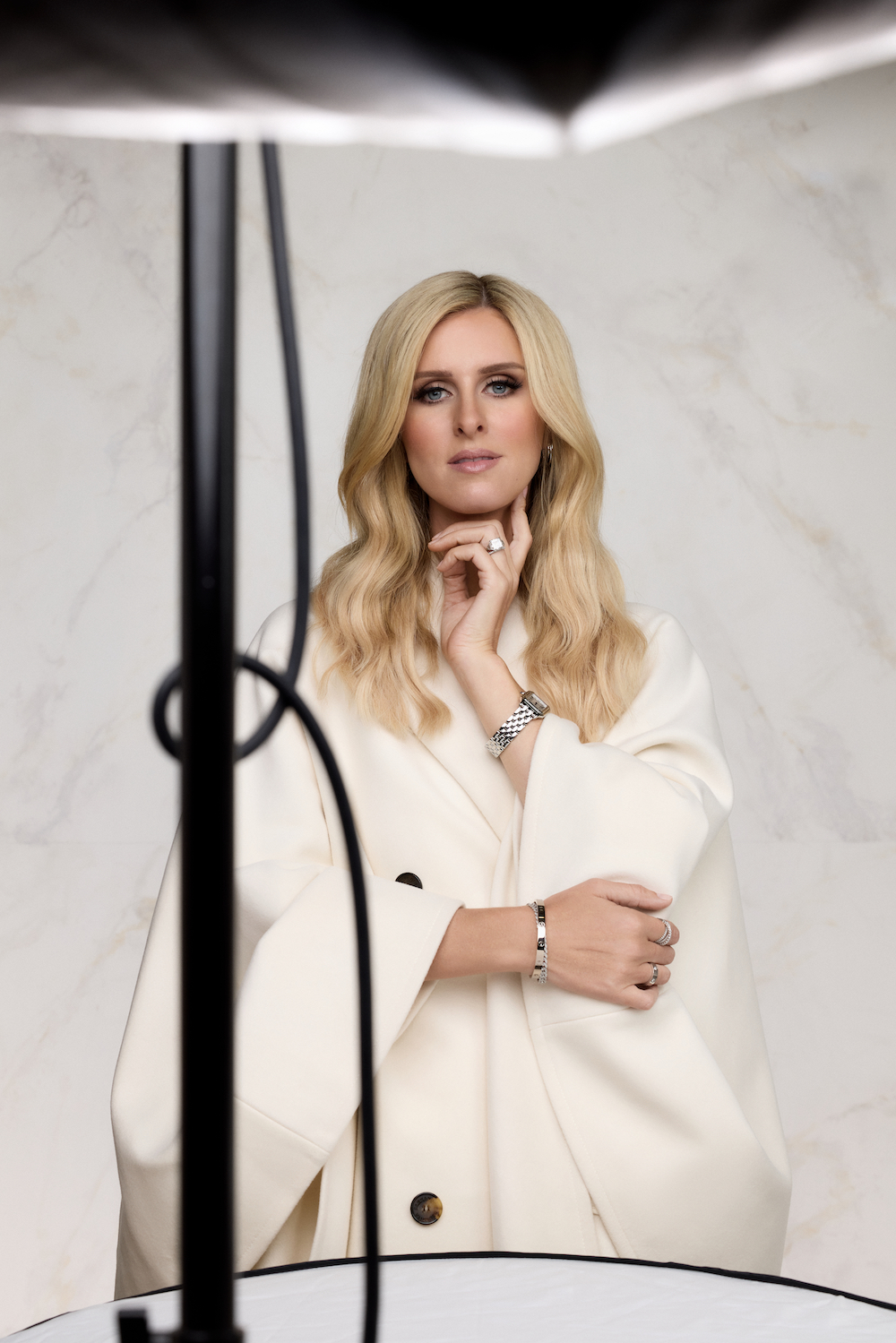 The suite life of a designer, mother and entrepreneur
By Aria Darcella
Photography by Cody Rasmussen
IN MY FASHION Nicky Hilton Rothschild at Cole Porter’s piano in the lobby of The Towers of the Waldorf Astoria New York wearing a Dolce & Gabbana dress, and jewelry by Boucheron

Nicky Hilton Rothschild is sitting at a piano once owned by Cole Porter at the Waldorf Astoria, posing for Avenue’s holiday issue, when the “news” breaks. “Congratulations,” somebody says, reading an alert on their phone — “Paris Hilton is Pregnant!” — sent by the New York Post. “You’re going to be an aunt.”

Hilton doesn’t flinch, maintaining her poise as the photographer circles, experimenting with angles. This is hardly her first time at the gossip rodeo.

It’s only during a break for the lighting to be reset that she finally says, “So, is someone going to read me the story?”

In person, Hilton is a measured presence: friendly, but reserved. She shares with her sister a figure that any designer would kill to dress, but in other ways, they split the genes they inherited from their parents, Rick and Kathy, right down the middle. “My father and I are very serious — to the point, direct. And Paris and my mom are” — here she pauses for a moment — “very similar.”

A preference for the straightforward life may not be surprising for someone who has spent her entire adult life adjacent to tabloid drama. Born in New York and raised in Beverly Hills, her childhood had all the 90210 trimmings: she participated in mother/daughter charity fashion shows as a toddler; Drew Barrymore was her babysitter. The family took annual end-of-year trips to Hawaii, staying at the Maui Four Seasons — a resort that received attention earlier this year as the setting for the HBO series The White Lotus.

“We would go to my parents’ suite, and they would get a Christmas tree,” she says. “We would open gifts and then go down to the beach.” Now she spends Christmas with her parents in L.A. “My mother is basically Mrs. Claus, and transforms her home into the North Pole,” she says. “She puts the tree up like in October and won’t take it down until February.”

Things changed for the teenage Nicky when the family returned to New York in 1996. The Hiltons moved into the Waldorf — a homecoming of sorts, considering Conrad Hilton (her great-grandfather) bought a controlling stake in the building in 1949. Though the hotel then had some apartments, residential floors were not yet as popular as they would become.

“I didn’t think it was weird until my classmates would come over and be very perplexed about why I lived in a hotel,” she says. “There was always someone or something exciting going on — one day going up in the elevator with Bill Clinton; the next day, Michael Jackson or the Rolling Stones. All the diplomats stayed here. When the president or any diplomat was in town it would take an hour to get in or out of the building with all the security. I was always late for school those days.”

From the late ’90s, in regular gossip column mentions and profiles in Vanity Fair and even The New Yorker, she and Paris were characterized as a table-dancing club kids who became their own fin de siècle brand, “The Hilton Sisters.” Back then, Nicky was a regular on red carpets. Then there was the Las Vegas chapel marriage to a childhood friend (annulled after three months), and various celebrity boyfriends, including Kevin Connolly and Ian Somerhalder.

If that’s wilder than anyone under 35 remembers her being, it’s because after a few years she started stepping away from the spotlight (declining to costar in her sister’s 2003 breakout reality hit, The Simple Life), even as her peers, aunts Kyle and Kim Richards, and mother Kathy were swept up into various competition shows or Real Housewives projects.

Flying under the radar allowed her to embrace a new identity, one that is almost conventional. After four years of quietly dating, she married financier and heir James Rothschild in London in 2015. The ceremony — which took place at Kensington Palace and was attended by Chelsea Clinton and Princess Marie Chantal of Greece, among other luminaries — was fairy-tale perfect, save for her veil getting caught under the wheel of her car. “I just pulled it and jumped in,” she recalls. “It was torn. But I don’t think people noticed.”

Rothschild, principal of his own investment company, JR Cap LLC, is even more low-key than Hilton. He has no personal social media, but is happy to appear on his wife’s pages or pose with her on red carpets. Despite being products of two of the wealthier and more publicized families in the world, the Hilton Rothschilds have managed to keep their lives together mostly under wraps.

When they are in public, it’s often either because they’re at a black-tie event or walking around the city with their daughters — Lily-Grace, 5, and Teddy, 3 — in tow. Occasionally, Hilton pops up in her sister’s projects, like Paris’s recent biographical documentary or her cooking show on Netflix. These days her main project is Nicky Hilton x French Sole, her collection with the shoe brand. The line includes ballet flats, loafers, and heels, all featuring soles of powder blue, her favorite color.

“I’m a New Yorker running around this city all day to pick up, drop off, appointments, meetings. I need something that is practical. And I think a ballet flat is the perfect combination of comfort and elegance,” she says, contrasting the style with Birkenstocks, which she detests. “I just think they’re unattractive,” she says. “Not pretty.” The opinion is perhaps only remarkable because it’s the single negative thing she says all day.

After six other changes, the last outfit of the afternoon is a Prabal Gurung party dress with a full feathered skirt. The look is something of a showstopper on Park Avenue, where she poses with an obliging yellow cab. A small crowd of passersby gathers, even if they don’t know what’s going on. One street vendor assumes we’re shooting a wedding. A family whips out their iPhones for photos, although it’s only while walking away that one of them finally recognizes her.

It’s around this time that social media starts popping with the next development in the day’s gossip cycle: Paris denies she’s pregnant. No doubt the crazy rumor, which had the effect of pushing her new cooking show into news feeds around the globe, caught her — and her public relations team, and the Netflix marketing team — just completely and utterly by surprise.

Throughout it all, our Hilton — the “normal” one — isn’t fazed. Not even when a paparazzo turns up out of nowhere, with a long-lens camera strapped to his wrist, and starts snapping. In fact, they have a cordial chat. It turns out they know each other — he’s her regular neighborhood shutterbug. For Hilton Rothschild, it’s all just a regular Tuesday in the city.