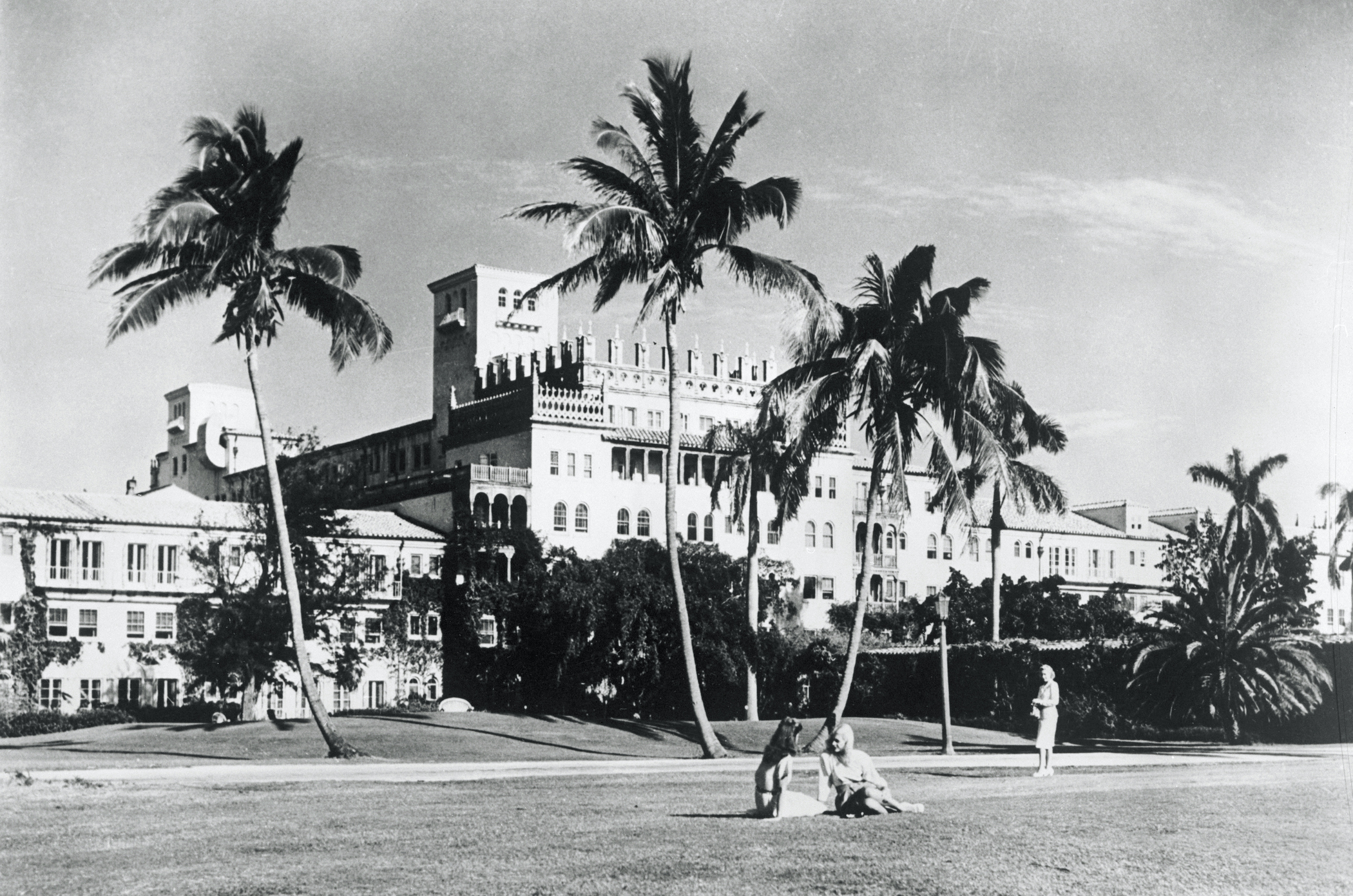 Palm readers
By Ambrose McGaffney
LOFTY TOWERS The Boca Raton Hotel and Club seen in 1954, on the eve of a $2 million restoration
Photo by Getty Images

The term “Gilded Age” was never meant as a compliment. The title of an 1873 novel by Mark Twain and Charles Dudley Warner about materialism and corruption in post-Civil War America, the reader was meant to understand the era’s “gilding” as mere artifice and ornament — the opposite of authentic, solid gold. That phrase may be the perfect lens through which to examine the brothers Addison and Wilson Mizner — two contemporaneous scoundrels who delighted in gilding the facts around their own sometimes scurrilous lives.

In South Florida, and especially among the blessed islanders of the 33480, Addison, the elder brother, needs no introduction. The self-made architect with a gift for Mediterranean pastiche created a distinctive aesthetic that not only pleased clients during his Palm Beach period — which lasted roughly from 1918 until his death in 1933, aged 60 — but also created the set for a mid-century pageant of American aristocracy that would be reproduced around the world by artists like the society photographer Slim Aarons.

In his business and personal lives, however, Addison’s record is somewhat messier. There was a failed real estate speculation leading to bankruptcy, as well as some public “relationships” with high-born women (one of whom, the heiress Bertha Dolbeer, committed suicide in 1904 by jumping out a ninth-floor window of the Waldorf-Astoria) which obscured his rather more sincere interest in handsome younger men.

Silvin intuited the bond forged by the colorful lifestyles of Addison and his ne’er-do-well younger brother, whom the architect reportedly referred to as “my chief weakness and dreaded menace.”

Wilson Mizner was a Broadway playwright, con man, and all-around hustler. According to biographer Alva Johnston, he “was the No. 1 sport, or man about town, in 1910. He was a glittering object… walked into restaurants wearing a made-to-order silk hat two inches higher than the norm… had the highest collars in the world specially made for him… carried a white-handled, white-shafted cane three or four inches taller than any other known walking stick and wore an Inverness cape thrown back over his shoulders to show its white satin lining.”

He was also a gambler and opium addict who nevertheless enjoyed middling success as a writer on the Great White Way and in Hollywood, and contributed various bons mots to the language that are still in currency today. “Be nice to people on your way up, because you’ll meet them on your way down,” for example, is reputed to be his. Also: “If you steal from one author it’s plagiarism; if you steal from many it’s research.” (And even if it isn’t one of his classics, honorary mention must surely go to: “To my embarrassment, I was born in bed with a lady.”)

The peculiar, symbiotic relationship between the brothers — two of eight children born to a prosperous family in Benicia, California — has been a subject of esoteric fascination since their death less than two months apart in 1933, Wilson aged just 56.

Their story inspired both Irving Berlin (who began but later abandoned a musical about Wilson) and Stephen Sondheim. Sondheim’s version opened at the Kennedy Center in 2003 as Bounce, having struggled through earlier iterations under the titles Road Show, Wise Guys, and Gold!

The opening number sets the tone of the brothers’ toxic codependence by referencing various grievances and shady dealings. “Just trying to help further your career,” Wilson tells Addison in regard to a (possibly invented) horse-doping scandal. His brother replies: “Well, when you got finished helping, I didn’t have a career!”

Alas, the show didn’t help Sondheim’s career either, after the New York Times critic Ben Brantley’s chilly review iced any prospects of it transferring to Broadway.

Although the composer took some license in depicting the brothers’ lives, the outline was based in fact. Their father was an American diplomat to Central America, exposing his children to an early dose of exoticism that would inspire both the architect’s and the writer’s later work. In 1897, Addison, Wilson, and two other brothers participated in Canada’s Klondike gold rush — although in Wilson’s case it was as a petty crook, rather than a miner. Given Wilson’s lax relationship with the truth, it’s hard to verify his next stops, but they may have included running a saloon in Nome, Alaska; living on a banana plantation in Honduras; and gambling professionally in San Francisco, before donning his silk top hat and cane and coming to New York.

In parallel, brother Addison also invented or embellished various exploits on his own résumé, including claiming to have planned the town of Dawson Creek, British Columbia; receiving a commission to build a palace for the dictator of Guatemala in return for $25,000 in gold bullion; and attending the prestigious University of Salamanca in Spain, during which stay he received a personal visit from the country’s king, Alfonso XIII, who inexplicably wanted to give him some wood paneling. (Addison had a habit of ascribing grand European provenance to architectural details in his Palm Beach homes that were in fact manufactured by Florida workshops.)

A large-scale 1926 real estate development in Boca Raton — for which Wilson served as treasurer — resulted in Addison’s personal bankruptcy and losses for investors. Wilson hightailed it to Hollywood, where he wrote screenplays for Warner Bros. and opened the iconic Brown Derby on Wilshire Boulevard, which became a fashionable film industry watering hole.

Sondheim’s Bounce opens just after these events, with the two brothers, both newly deceased, meeting in the great hereafter.

“You don’t suppose this really is heaven,” Wilson asks incredulously.

“If guys like you get to go to heaven, Willie, who has to go to hell?” Addison replies.

Wilson considers this for a moment and responds, “Point taken.”