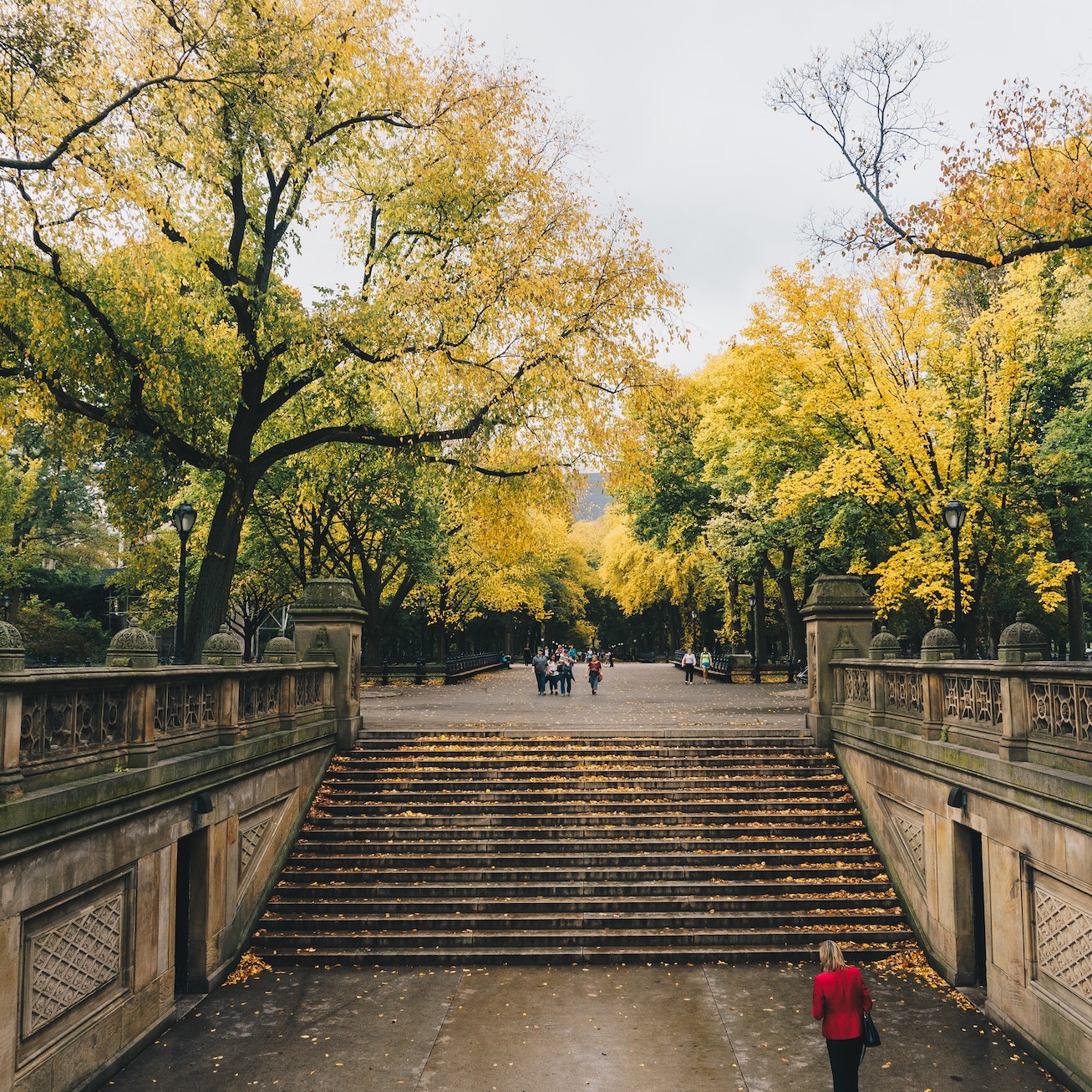 Going stir crazy under quarantine? Grab a breath of fresh air and tour some of the city's best gardens and parks on foot. Just remember to stay at least six feet apart from anyone else.
Photo by Jon Tyson (Unsplash)

For a city so dense with skyscrapers, and asphalt, New York also has a surprising number of parks, gardens, and leafy walkways among the concrete. New York is, above all things, a walking city: best explored, and most fully understood on foot.

In Central Park, Manhattan boasts one of the most beautiful and renowned parks of any city in the world, but it is only one of the New York City’s public green space that warrant rambling walks. Finding the most peaceful place to picnic, the perfect spot for viewing the Manhattan skyline, or the secret garden that offers respite from the bustle of the city is something that comes through curiosity and experience. From midtown Manhattan to deepest Brooklyn, there are wonderful green spaces hidden everywhere — you just need to know where to look. In New York in Stride, illustrator Jessie Kanelos Weiner and I outlined walking itineraries that take you through some of the city’s most interesting and varied neighborhoods. Dotted among the walks are sections on the parks and gardens that you can discover along the way; here are a few.

Situated in the heart of Manhattan, Central Park absorbs and reflects much of the energy of the neighborhoods surrounding it. The south side of the park, bordering midtown and the shopping of Fifth Avenue, is usually the busiest, with locals navigating a sea of tourists, caricaturists, and horse-drawn carriages. The northern end of the park, bordering Harlem and farthest from the tourist hub of 59th Street, is the most relaxed, with domino tables and pick-up sports among the monuments and plantings. The Fifth Avenue side, with the formal landscaping of the Conservatory Garden, matches the grandeur of Museum Mile. And Central Park West encapsulates the mix of the historic and the bohemia that defines the Upper West Side. A winding route through the whole of the park can reveal not only the variety and beauty of Vaux and Olmsted’s landscaping, but the character of the city around it.

The pond is famous for attracting model boat enthusiasts who bring their vessels on weekends and watch them negotiate the waters from the terrace around the edges. It’s a whimsical sight and a fun place to sit with a drink and watch the maritime miniatures. Enter at Fifth Avenue and 74th Street.

The Conservatory Garden is the only formally landscaped garden in Central Park. It is divided into three distinct sections — English, Italian, and French — each with its own features and planting style. The grandest of the three is the Italian garden, with colonnades of crabapple trees facing one another across a manicured lawn and a staircase rising to a pergola draped with climbing wisteria. The French garden is awash in references to the gardens of Versailles, including perfect parterres of flowers surrounding a fountain. But the greatest treasure is the English garden, where wilder flowers and perennials surround the Frances Hodgson Burnett Memorial Fountain, which honors the author of The Secret Garden. Enter at Fifth Avenue and 105th Street or the 106th Street gate inside Central Park.

The path around the reservoir frames some of the greatest vignettes of the city’s skyline, the wide expanse of water allowing for uninterrupted views across the park in any direction. It’s a popular place for locals to walk or jog and a picturesque route when walking north or south through the park. On the northwestern side of the reservoir, the Gothic Bridge — the most charming of the three iron bridges designed by Calvert Vaux for the park — crosses the bridle path.  Enter at Fifth Avenue and 90th Street.

The upper section of the High Line differs in character from its southern counterparts, in large part because of the architecture surrounding it. As the walkway winds through Chelsea’s gallery district, walls and windows close in on either side, so pedestrians feel as if they’re walking right through the buildings of the neighborhood. The lawn at 23rd Street is a serene, surreal resting place, the green space floating between the brick walls of warehouses on either side; the Falcone Flyover, which runs from 25th to 27th Streets, focuses foot traffic into a narrower path overhung with extraordinary lush greenery from magnolias to sassafras. Look out for the 26th Street spur, where the path juts out over the street below and while sitting on wooden benches you can watch the city go by. The High Line concludes just a few blocks farther north, among the gleaming new residential towers, Thomas Heatherwick’s towering Vessel sculpture, and the wide, public space of Hudson Yards.  West 23rd to West 34th Streets, New York, NY 10011

THE CHURCH OF ST. LUKE IN THE FIELDS GARDEN

Through an easily missed gate in the red-brick wall that runs along this block of Hudson Street lies one of the city’s prettiest gardens. Maintained by the episcopal church, which was established here in 1821, the gardens have been developed through the centuries into a magical series of verdant spaces, joined to one another by charming paths that wind around the church and its adjoining school. The Barrow Street Garden has an English feel, with a flagstone path surrounded by leafy hedges and ivy-clad old trees, and the Rectory Garden is planted with roses and colorful flower beds that attract legions of butterflies. Benches are scattered throughout, and the garden is seldom busy, making it a beautiful, peaceful place to step away from the noise of the Village streets.  487 Hudson Street, New York, NY 10014.

Seward Park has been at the heart of the Lower East Side’s community for more than a century — it was the first municipally-funded playground in the country when it opened in 1902 — and continues to reflect the eclectic mix of cultures that defines the area. The park is below the magnificent Forward Building, which is now converted into beautiful apartments. Chinese neighbors practice tai chi around the fountain and in the playgrounds early in the morning, and the Hester Street Fair, which brings food and arts and crafts stalls to the park weekly from April through October, epitomizes the cooler and younger side of the neighborhood. Canal Street and Essex Street, New York, NY 10002

Just across the East River from Roosevelt Island in Queens, you’ll find tucked away one of New York’s most peaceful places to enjoy the spring weather and to reflect: the Isamu Noguchi Foundation and Garden Museum. Open to the public since 1985, the museum was built by Noguchi himself, whose studio had been nearby since 1961. As well as housing a vast, permanent collection of Noguchi’s renowned sculptures, the museum features a Japanese-style garden with pebbled paths as well as water fountains and sculptures hiding among pine trees and willows. With a small bookshop and a café inside, the Noguchi Museum is a serene end to a journey from midtown — and a fitting tribute to the artist who paved the way. 9-01 33rd Road, Queens, NY 11106

The biggest park in Brooklyn, Prospect Park was landscaped by the same masterful designers as Central Park: Calvert Vaux and Frederick Law Olmsted. A little wilder and less obviously manicured than its Manhattan counterpart, Prospect Park can feel like a country oasis, with hills, lakes, waterfalls, woodlands, and acres of open fields. But it’s also varied enough that you can discover secluded spots, like the Vale of Cashmere — a series of circular clearings with fountains almost hidden up a path near the Grand Army Plaza entrance — or the woods that run around the lake, where small benches look out over the water beneath pagodas.

An unlikely sight amid the crowded shops and row houses of Nolita, this charming quasi-Italianate garden runs from Mott Street to Elizabeth Street, just below Prince Street. In 1990 the garden was leased by the adjacent Elizabeth Street Gallery, whose owner landscaped the garden as we know it today and installed the eccentric collection of furniture, sculptures, and decorative objects that sit among the trees and lawns. Open to the public (for now, at least, while the city debates tentative plans to construct affordable housing here), the garden is a beautiful place to sit and enjoy the rare privilege of quiet green space downtown. Elizabeth Street between Prince and Spring Streets, New York, NY 10012

At the very southern tip of Roosevelt island, the Franklin D. Roosevelt Four Freedoms Park is one of New York’s most perfectly conceived (and least-known) green spaces. Designed by the influential architect Louis I. Kahn in tribute to the former president, a monumental staircase and avenues of trees form a triangle thrusting into the East River, commanding beautiful and unusual perspectives of the midtown skyline on one side and Long Island City in Queens on the other. Adjacent to the Cornell Tech campus, and frequented primarily by locals and adventurous walkers, the park is almost always quiet and, like many of Kahn’s projects, feels almost religious in its serenity. Roosevelt Island, New York, NY 10044

Running alongside Brooklyn Heights and DUMBO, Brooklyn Bridge Park is an idyllic and varied waterfront oasis with clear views of lower Manhattan across the East River. The redeveloped piers beneath the Esplanade offer everything from sports fields to picnic areas — there’s even a sandy beach and an outpost of the popular ice-cream chain Ample Hills for the warmer months. To the north, the pathways lead to the Empire Fulton Ferry Park and Main Street Park, with Jane’s Carousel, the River Café, and other DUMBO landmarks along the way. Entrances on Atlantic Avenue and Furman Street (Pier 5 and 6); Joralemon and Furman Street (Pier 5); Furman and Old Fulton Street (Pier 1).

There may be no clearer emblem of New York City’s capacity to evolve than Columbus Park. Once the site of the original Five Points — the stomping ground of the characters made famous in Scorsese’s Gangs of New York and an area contested for more than a century by Dutch, Irish, and Italian immigrants — the park is, today, a serene hub of the local Chinese community and anyone else wise enough to find their way there. Surrounded by the taller buildings that border the Financial District and the curving row houses of Mulberry Street, the park is protected from the nearby noise and bustle. Older neighbors practice tai chi here at dawn, and families gather to clean and prepare produce from the markets of Chinatown. The beautiful pavilion at the northern end of the park is unique and occupied most often by locals playing mahjong in the afternoons, and singing Cantonese opera in the evenings. Mulberry Street at Bayard Street, New York, NY 10013