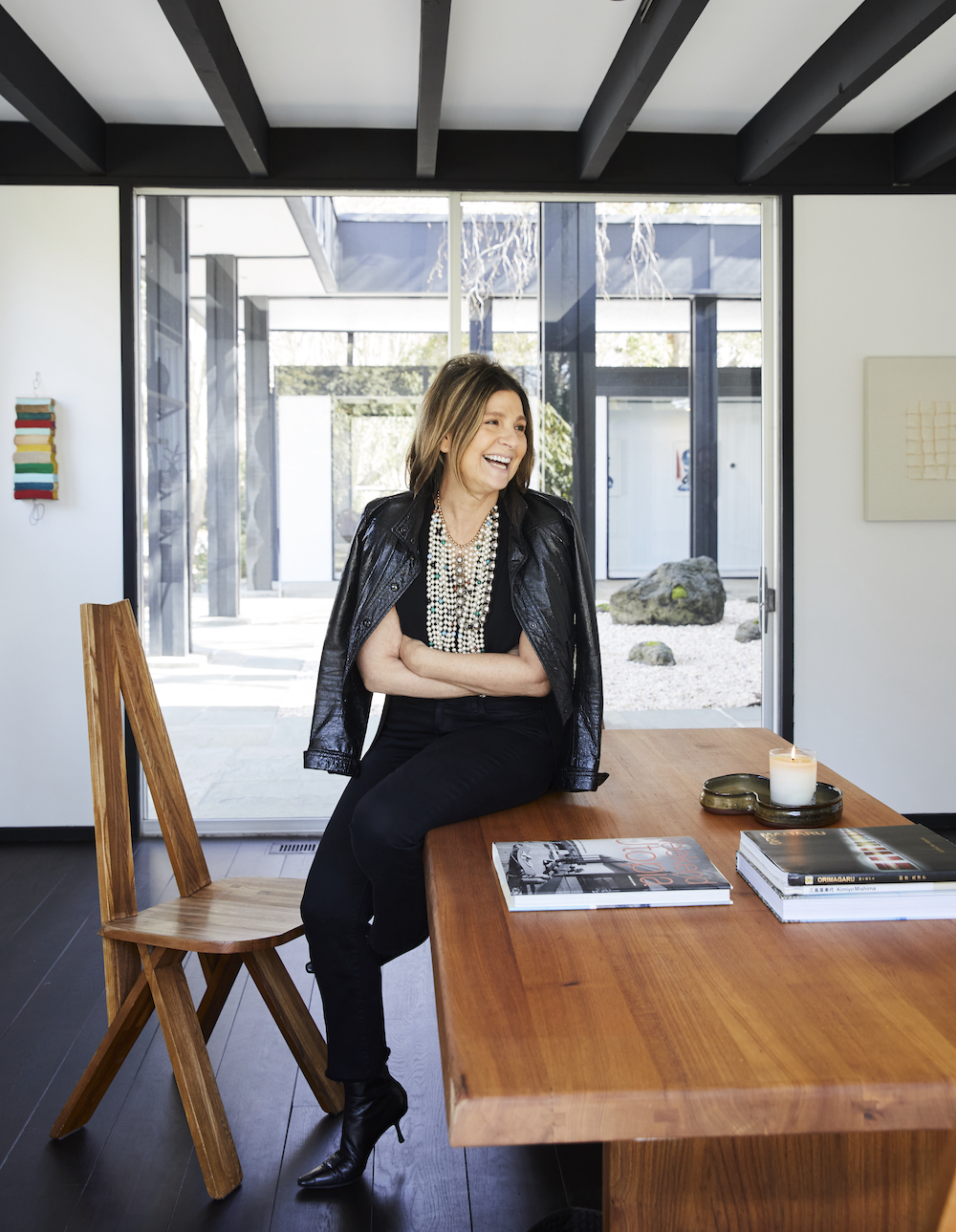 Onna House Transforms the Hamptons Into a Hub for Female Artists

Room of one's Onna
By Celia McGee
Photography by Melanie Acevedo
ALL OF A PEACE The front Onna House, restored by Lisa Perry
Photo by Jordan Tiberio

Women need a room of their own. But sometimes, as Virginia Woolf herself might agree, they need some together. That is the idea behind Onna House, a new space founded by the designer, collector, author, social fixture, and political power broker Lisa Perry and dedicated to presenting — and appreciating work — by women artists and designers, which opens in East Hampton over Memorial Day weekend.

“Hi all,” trills Perry, bounding in from the black SUV that has deposited her at the modernist house she has spent the last year restoring, refurbishing, and giving a new name: onna means woman in Japanese. She has arrived to spend the morning with four of the more than 20 women painters, sculptors, textile, and mixed-media artists, ceramicists, and furniture designers whose work will be featured in Onna House’s inaugural season. There are flowering branches to be arranged, books to be opened to just the right archival photographs of the house when it was built in 1962, and iconic pieces by women from the past to be looked at through the prism of Perry’s contemporary discoveries. That’s a mahogany bench by Charlotte Perriand nestled up against an Anni Albers rug in the elongated main room, offset slantwise by elegantly attenuated dining furniture from London-born Anna Karlin’s collection Subverting Domestic Familiarity.

Perry is all about subverting domestic familiarity. The morning’s espresso is served in handspun Japanese crockery, a pedestal bowl by interior designer Kelly Behun piled with bright rounds of dried wasabi peas playing off a platter of plump doughnut circles from Grindstone Donuts and Coffee in Sag Harbor — unexpected juxtapositions that anyone who knows Perry has come to expect. “Her eye is so clear and quick and decisive,” says the ceramics artist Toni Ross, better known to many perhaps as the Toni of Hamptons hotspot Nick & Toni’s, whose Stele 21, sculpted from stoneware, slip, and cotton thread, was an early Onna House acquisition. Because Perry places each piece in dialogue with others, says Bridgehampton artist Sabra Moon Elliot, she has “made the art into a symphony,” and the artists chosen for Onna House feel composed into a whole.

Onna House differs also from the traditional gallery model because Perry has designed it as a place where women can gather to exchange ideas about their work and lives, and where potential collectors will not just have a chance to see new work but meet the artists behind it. “We’re able to come together here,” says Elliot, “and talk about our work away from the isolation of our studios.”

Located on exclusive Georgica Road, Onna House will be open by appointment only. “It’s a place to be inspired and collaborate and build a sense of community,” says Perry, who worked on it with architect Christine Harper. “I’m a big believer in women having a place of their own because we think and see and feel differently — it’s a place to just be ourselves.”

Although her building blocks include boldface names like Kelly Klein, Behun, and Ross, others are just starting to be recognized, or receiving attention long overdue. Candace Hill-Montgomery segued from an early career as one of the few Black models walking the runway for Oscar de la Renta, Bill Blass, and Mollie Parnis into decades of high-school art teaching because the doors of commercial art galleries remained closed to her as a Black woman artist. Three of her statuesque cyanotypes and a woven artwork line the Onna House entrance, and this summer she will be an artist-in-residence at The Church in Sag Harbor.

The notion for her sanctuary came to Perry the moment she saw the original property, she says. So did a flood of childhood memories of a house not unlike the one before her when she and her husband, retired hedge funder Richard Perry, went with a real estate broker to look at a low-slung dwelling many other Hamptons buyers would have viewed as a teardown. Her mother had had a gallery in Chicago, and she grew up in a Japanese-inspired house by modernist George Frederick Keck in Highland Park, Illinois. Her father founded and ran the family textile company, Dana Mills. “I felt like I had come home.”

The property’s provenance wasn’t bad, either. Originally designed for glamorous “taxi tycoon” Pop art collectors and Andy Warhol patrons Robert and Ethel Scull, the property seemed tailormade for a designer and collector whose lifestyle brand spent much of the past two decades referencing the ’60s at their most ebullient.

“It was freezing cold,” she says, and the Perrys had driven down from their estate in North Haven because the pandemic — and the Trump years — had given Lisa the idea for a retreat where she could break herself out of an unaccustomed solitude. “My house in North Haven is great,” she says, “but there was only so much solitude I could take being there just with Richard full-time.”

Spending more time in the Hamptons, she had also met Russ Steele, a well-connected art, antiques, and artifacts dealer who runs his operations out of the same address as East Hampton’s Red Horse Market. He encouraged her to look at the wealth of art and design by women in the area, as did a much younger dealer, Tripoli Patterson, a former surfer who now runs a blue-chip gallery out of a converted warehouse in Wainscott. Through them she found herself drawn to work by women with echoes of her childhood home, and markedly departing from the oversized, hard-edged, color-saturated work by primarily male artists with which she and her husband had made their name as collectors.

This time around the work tended to be spare, tonal, and earthy, referencing nature and the cosmos, as well as women’s inner worlds and emotions, their private strengths and sources of resilience. A small, two-part Behun piece called Charm Table is meant to suggest nurturing and motherhood. Site-specific artist Almond Zigmund chose the kitchen for her series Dresses and Urns, mural-scale biomorphic compositions painted on mulberry paper pasted directly onto the walls. Much of the work Perry favors now, too, has its roots in traditional textile arts associated with women — knitting, sewing, quilting, weaving, crocheting — that have a special resonance for her, since she first came to New York to study at FIT with a focus on textile technology and color theory.

In June the first show in the space for temporary exhibitions repurposed from the ample garage will be work by the Swiss jewelry and fashion designer Ligia Dias that includes dresses fabricated from paper on a monumental scale. Onna House, Perry says, “combines every one of my passions. My passion for art and design with my passion and longstanding support for women’s rights.” Her close friend Hillary Clinton has already visited.

It should come as no surprise that Perry is hoping to host artists’ salons and talks as well, and fundraisers for nonprofits and organizations targeted to the East End. The guesthouse seems to be begging for eventual artist residencies. Only half-jokingly, she adds, “Next, Onna House South, in Florida,” where the Perrys have a house in Palm Beach, “and then, the south of France,” where they own a villa on the Côte d’Azur. Seated in the room off her office that she now calls the Tea Room, she gives a delighted wriggle in one of the two spherical 1950s rattan chairs there. “I used to think these were by a male designer,” she says. “But I found out they were designed by a woman,” the French designer Janine Abraham. “You can imagine how happy that made me.”