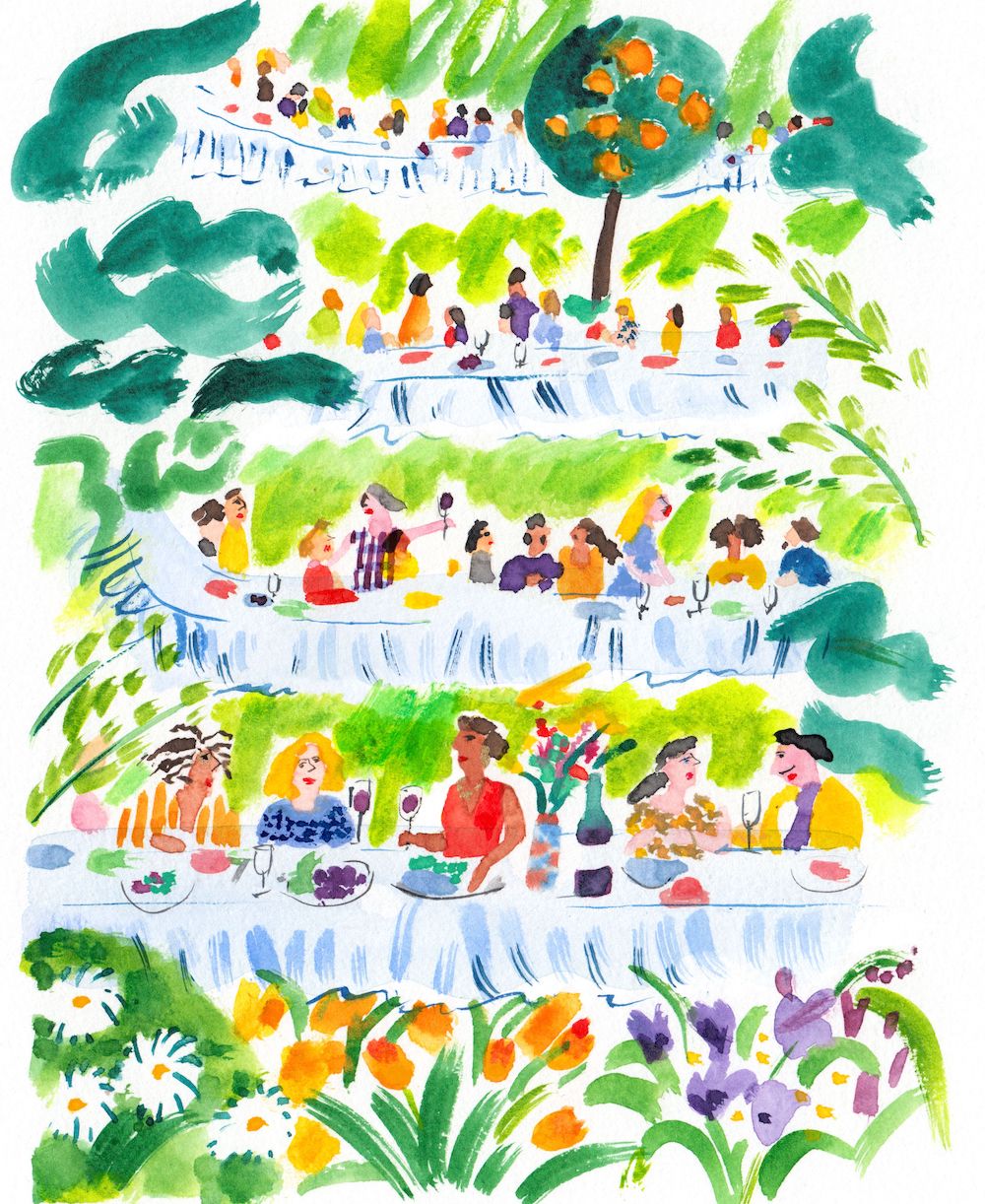 If, this summer, you happen to be flying above Sagaponack and catch sight of a very long table set in the middle of Foster’s Farm, one of the last potato farms on Long Island, and this table has on it many bottles of vodka (from said potatoes) and plates of succulent tomatoes dolled up with burrata, do not be alarmed. And if, a few days later, you see a very tall man in a cowboy hat molding sand on Long Beach Island while another very long table is set before him and guests in floppy hats are feasting on homemade pastas, stay your nerves. This is all the work of Jim Denevan and his gallivanting de trop dining series Outstanding in the Field.

Founded nearly 20 years ago, Outstanding in the Field — OITF to aficionados — grew from a few en plein air events staged in the wilderness to a peripatetic dinner series showcasing world-class chefs and world-class farmers whose tickets sell out in a matter of minutes on the OITF website. In addition to the Hamptons and New Jersey, this season’s locations include the Hearst Ranch in San Simeon, California; a secret sea cove in Pescadero, California; an oyster farm in Edgecomb, Maine; and an oasis in Fez, Morocco. Leading it all is Denevan, an artist, former chef, and model, who grew disillusioned with kitchen life and set out to create his own sort of dining experience.

What was once a one-man show has now grown to include a team of around 100 people who spend the year finding fields (and other locations) and chefs willing (eager, even) to tackle the challenge of feeding a hundred or so lucky souls without the benefit of a traditional kitchen. Call it charm or perhaps just the accumulation of clout, but recruiting chefs hasn’t seemed to be a problem. In the past, chefs have included David Kinch from Manresa and Paul Kahan from Blackbird. This year’s crop includes chefs from award-winning restaurants such as Julien Hawkins of Austin’s Hestia and two-time James Beard Award nominee Kelly Whitaker of Boulder’s Basta.

But it’s not just that the number of chefs or events that have broadened; Denevan’s field itself has diversified. “Ten years ago we were one of the few companies to include chefs from cultures other than Europe,” says Denevan. “Now we can include chefs from all over the world.” As the scope of the events have grown, the roster now includes farmers like Fatmata Binta of Ghana’s Fulani Kitchen, ranchers like Doniga Markegard, and farmers like Christa Barfield, a Black female farmer from Philadelphia whose farm, Farmer Jawn, will host its own long table this September. Like a long-gestating seed, 20 years on Denevan’s idea of communing with the land while dining like a god has finally blossomed.