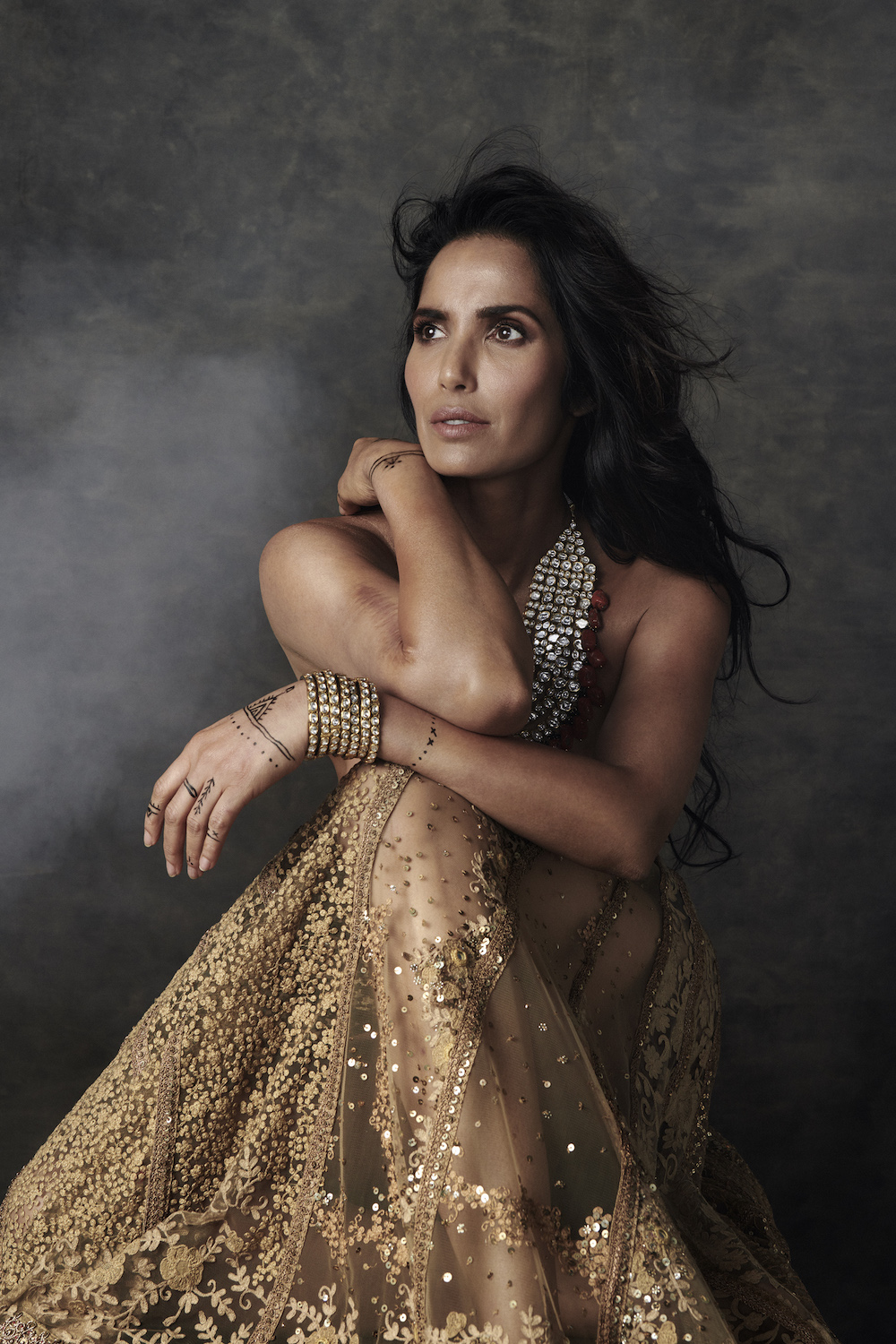 The World According to Padma Lakshmi
Culture

The World According to Padma Lakshmi

In her new documentary series on Hulu, the fashion and culinary star explores America's rich regional culture through its food
By Ben Widdicombe
Padma Lakshmi
Photos by Kristian Schuller/Blaublut Editions

On a sun-dappled spring morning in New York City, Padma Lakshmi is lying on the sofa in her downtown Manhattan apartment, with its vintage wooden furniture, wide floorboards, and exposed brick walls. Krishna, the ten-year-old daughter she shares with venture capitalist Adam Dell, is drawing on a table nearby.

She has to describe the scene over the phone, because, in these socially distanced times, there is no journalist or photographer there to observe it. Has she been a whirlwind of activity in this new work-from-home world?

“Truth be told, I’ve been in bed until now, watching Game of Thrones,” she says with a chuckle. “I woke up about three hours ago to check on my daughter, but then she was sleeping, so I watched another episode. And now I’m plotting what I should make for lunch for everybody.”

Food is never far from Lakshmi’s mind, either personally or professionally. In addition to hosting Bravo’s hit series Top Chef for 16 seasons, she has authored two cookbooks, an encyclopedia of herbs and spices, and her 2016 memoir, Love, Loss, and What We Ate.

But now Hulu is currently streaming Taste the Nation, her most ambitious project yet. The ten-part series, which she also conceived and executive produced, takes her across the United States, experiencing both Native American and immigrant cuisines.

“Our message is, ‘This is what America looks like,’” she says. “It’s meant to show you the sweeping breadth and diversity not only of the people, but also of the land.”

The audience, she hopes, will be inspired to “scratch their curiosity, so that they explore pockets of their own city that they never have explored, and try the food. I hope it causes people to be curious about each other.”

Although she has always returned to the culinary arts, Lakshmi, 49, has had a remarkably varied career. Born in Chennai, southern India, to an oncologist mother and a businessman father, she lived in both New York and Los Angeles as a child. A successful modeling career kept her in Europe for much of her twenties.

In the late ’90s, she hosted Italy’s most popular television variety show, Domenica in. Her eclectic acting credits include several Bollywood and Italian pirate movies, a small part in Mariah Carey’s film Glitter, and even an episode of Star Trek: Enterprise.

Prompted by the interviewer, Lakshmi asks Krishna which of these credits impresses her the most. She replies that her mother’s greatest achievement is giving birth to her.

“Which I also think, for the record, is my favorite thing that I’ve ever done,” Lakshmi says after a burst of laughter. “We are raising a very confident child.”

Lakshmi’s willingness to allow such glimpses into her domestic life is also apparent in the series. Each episode addresses a different culture through its food, from San Francisco’s Chinatown, to visiting an Indian grocery store in Queens with her mother, to exploring German food in Milwaukee.

She gently probes her subjects about their lives, which she discusses through the lens of her own immigrant family history.

“I am asking a lot of people in these episodes to really open up their lives and their family to me. And I shouldn’t be able to ask them anything I’m not willing to reveal myself, because all of that personal history is what informs the show,” she says.

That means letting them tell their own stories, something Lakshmi feels she didn’t always get to do herself. In fact, many Americans were first introduced to her through New York’s tabloid gossip columns.

As Lakshmi frankly discusses in her memoir, she started dating Salman Rushdie, the novelist and intellectual who became world-famous as the subject of an Islamist fatwa, when he was still married to his previous wife.

In 2006, two years into their marriage, she told Avenue: “Being married to a giant cultural figure like Salman Rushdie, I want to earn my seat at the table. After all, I was a published author before I met Salman.”

The celebrity media pounced when they divorced the following year, and also closely followed her relationship with Teddy Forstmann, the billionaire financier, which lasted until his death in 2011.

And they feasted on the ups and downs of her relationship with Krishna’s father, which included a bitter custody dispute, followed by a romantic reconciliation.

All of that history, she says, informs how she wants to empower the people she meets on her own show.

“I spent a lot of time being in papers for my personal life, and I never had control of it,” she says. “That was so on the fringes of what my real life was like, and I’m glad that period is over.”

“Food is the language I approach the world with. Being an immigrant myself, I think it’s the key to any culture. It’s nonthreatening, but it is also basic survival, and that is very political.”

Taste the Nation, which took two and a half years to realize, has a socially conscious tone that is much more suited to an op-ed than the gossip pages.

“It’s been a long and interesting ride,” Lakshmi says. “I’m learning on the job because I’ve never done something so editorial before, and I never had the control to do exactly as I thought best in all aspects of the creative process.”

Then comes one of her spontaneous, cascading laughs.

“It’s definitely a group effort, but you are getting my opinion,” she explains. “It’s the world, according to me.”

The series also allows Lakshmi to articulate a partisan point of view that is not necessarily common in other food shows.

“Food is really political, and I have been thinking about this issue for a long time,” she says. “Food is the language I approach the world with. Being an immigrant myself, I think it’s the key to any culture. It’s nonthreatening, but it is also basic survival, and that is very political.”

Lakshmi started working with the American Civil Liberties Union, focusing on immigrant stories, after the 2016 election. The first episode of Taste the Nation was shot in El Paso, Texas, and directly addresses the current administration’s policy of building a wall between the United States and Mexico.

“Maynard” — Haddad, proprietor of the city’s James Beard Award–winning H&H Car Wash and Coffee Shop — “says you can build all the walls you want, as tall as you want. But it’s not going to stop people from commingling, because they’re hungry. That’s human nature.”

Lakshmi sees an analogy between that physical separation and the social distancing which has been imposed upon communities by the coronavirus.

“I have a feeling that Mother Nature has a way of correcting things. We were getting to be a really consumerist society, and all of a sudden now we’re needing to make do with less and stay home,” she says.

“One of the things my show proves is what this incident proves, which is the importance of breaking bread with someone. Because that has been taken away from us, and now we know we cannot live in isolation.”