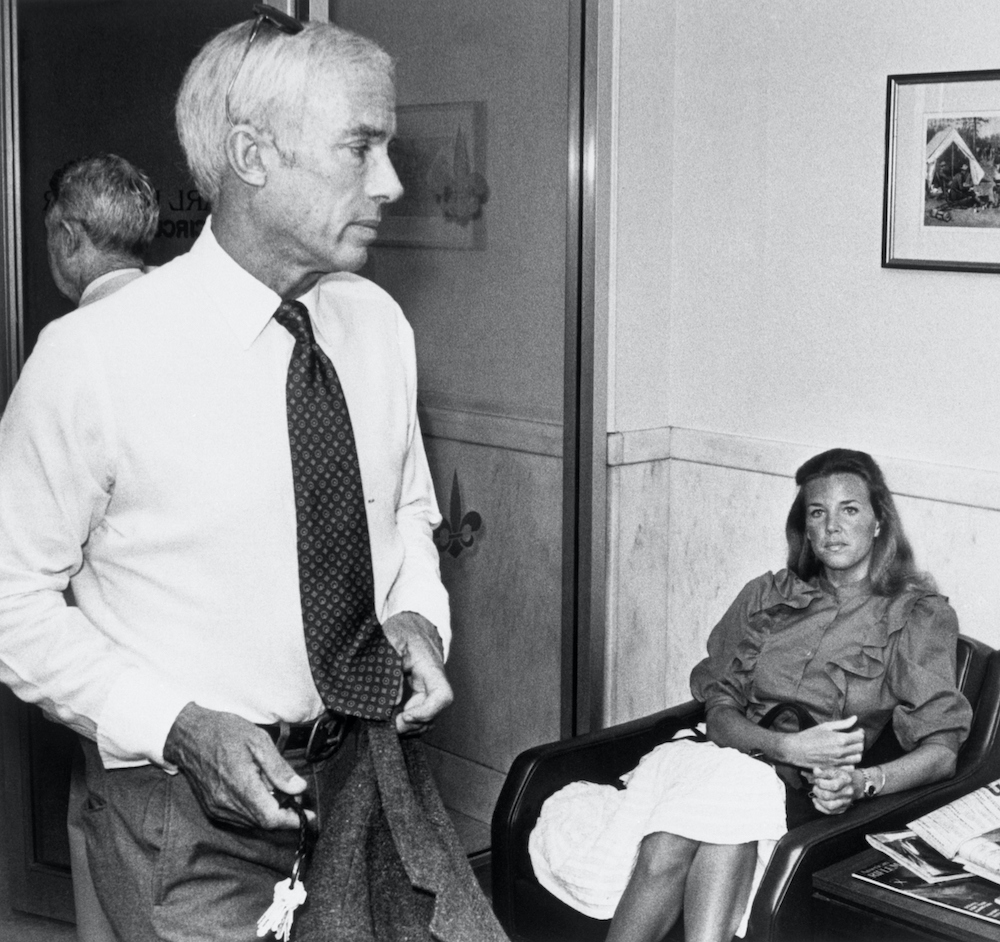 Peter Pulitzer and the Divorce that Rocked Palm Beach
Feature

Peter Pulitzer and the Divorce that Rocked Palm Beach

Joseph Pulitzer was the Gilded Age newspaper baron who successfully laundered the questionable reputation of his tabloids by endowing a prestigious and eponymous prize still given annually by Columbia University. But his grandson, Herbert “Peter” Pulitzer Jr., wanted nothing to do with the media legacy to which he was an heir.

Handsome, ambitious, and a bit of a wild card, Peter wanted to make his own name and fortune. He succeeded with the fortune part. His name, however, will forever be tied to one of the most salacious divorces in Palm Beach history.

Born in New York in 1930, Pulitzer was raised in luxury. Blessed with great looks, he had an adventurous streak that friends found exciting.

“He was racy… in the sense of just jumping into his plane and flying off,” Peter Duchin, the legendary band leader and a family friend, once told Vanity Fair. “He eschewed the normal social crap.”

Defying the expectations of his rank, Pulitzer dropped out of college and used $500,000 of his family’s money to fund early businesses, which included a bowling alley and a liquor store. By the time he met Lillian Lee “Lilly” McKim, who would become his first wife, he also owned citrus groves in central Florida.

In many ways, Lilly was his perfect match. A young woman of equal social stature, she also found the charmed life stifling. They were two of a kind, and eloped soon after meeting in 1952.

The Pulitzers became the toast of Palm Beach. The couple eschewed grand galas in favor of casual house parties. Peter flew a plane and Lilly had a pet monkey. They weren’t just attractive, they were interesting.

But after having three children, it all became too much for Lilly. While she loved her kids, she lost interest in her husband, and needed something of her own to do.

She and her friend, Laura Robbins, set up a juice stand on Pulitzer’s grove. Needing clothing that could hide stains, they asked their seamstresses to make simple dresses out of brightly patterned fabric. The clothing became a huge hit. Leveraging her family name, they established the fashion brand Lilly Pulitzer, Inc. Lilly became president, Peter stepped in as VP, and an empire was born.

Meanwhile, Peter was also cofounding an international hotel group. With their bustling careers, things seemed to be going so smoothly for the Pulitzers that when they divorced in 1969, friends and family were shocked.

Ever the ladies’ man, Peter soon found love again. Like Lilly, his next wife, Roxanne, was also a free spirit. And at 21 years his junior, she was young and fun, and had a flirtatious energy. But unlike Lilly, Roxanne came from a humble background.

Originally from upstate New York, Roxanne attended college in Florida after her first divorce, selling insurance to make ends meet; she met Pulitzer at a party thrown by her boss.

Although she had Pulitzer’s stamp of approval, his social circle remained cool to the newcomer. They even went as far as requesting Peter attend events by himself, she would later recall. Roxanne finally started receiving social invitations when they married in 1975, although she still had trouble making friends.

“I got along very well with the men. They loved me. But the women didn’t,” she told the Washington Post in 1985. “I got so sick of saying hello to people who wouldn’t even give me the decency to say hello back. I’d purposefully go over and talk to their husbands. Not flirt with them, but let them [other women] think I was.”

The marriage went smoothly for a while — but just like Lilly before her, Roxanne became restless after her twin sons were born. She wanted to party more; Pulitzer did not. This time it wasn’t the announcement of a divorce that shocked, it was the trial.

Things quickly and publicly became acrimonious, with the couple accusing one another of sordid affairs. He claimed she significantly reduced his fortune through frivolous spending, had extramarital relationships with both men and women, and introduced him to cocaine.

Roxanne played just as rough. She accused Pulitzer of having an incestuous relationship with his daughter from his first marriage, which both parties denied. (When the daughter took the stand, she claimed that in fact it had been Roxanne who propositioned her.)

Still, Roxanne suffered the brunt of the negativity, as the Palm Beach set stayed firmly in Pulitzer’s corner. Things only got worse for her reputation as the story gained national attention.

The divorce became a media sensation. Hunter S. Thompson reported on it for Rolling Stone, and the New York Post ran the headline “I Slept With a Trumpet,” purportedly quoting Roxanne.

The instrument had been used in a séance, which played into a storyline smearing Roxanne for her interest in the supernatural. In fact, she later explained, she merely kept it in her bedroom closet — which was close enough to her bed for the smart-alecky Post. Still, the story became part of her legend, and in 1985 she posed with a trumpet on the cover of Playboy magazine, touting a nude spread.

In the end, the divorce played out like a soap opera showdown, with Roxanne unfairly cast as a trashy, social climbing party girl.

“My gut feeling is that it was more a power situation,” she said years later. “The name, the money behind it, Palm Beach being very close-knit…. I really felt the power more than anything else.”

After 19 days of testimony, Pulitzer was granted custody of their two children. Roxanne walked away with only her Porsche, $60,000 worth of jewelry, and $2,000 a month for two years.

Bizarrely, the frisson of the divorce briefly reignited the couple’s feelings for each other, and they “dated” for another year before finally breaking up for good.

Decades later, she got the last laugh. In 2011, Forbes reported that an orchard Pulitzer co-owned with their sons was on the brink of bankruptcy and foreclosure after citrus canker wiped out 88,000 grapefruit trees. They were bailed out by Roxanne’s fifth husband, Tim Boberg.

Pulitzer died of natural causes in 2018, a peaceful end that surprised many who knew him.

His daughter, Liza Calhoun, was quoted in a Palm Beach Daily News obituary saying: “We always thought he would be eaten by a shark or killed by a bear in the woods or fall out of a seaplane.”

Mugrabi Divorce Settled: "She Asked for $100 Million"
Recommended for You
Feature
Inside the Dramatic Rise and Fall of Phoenix House
City Life