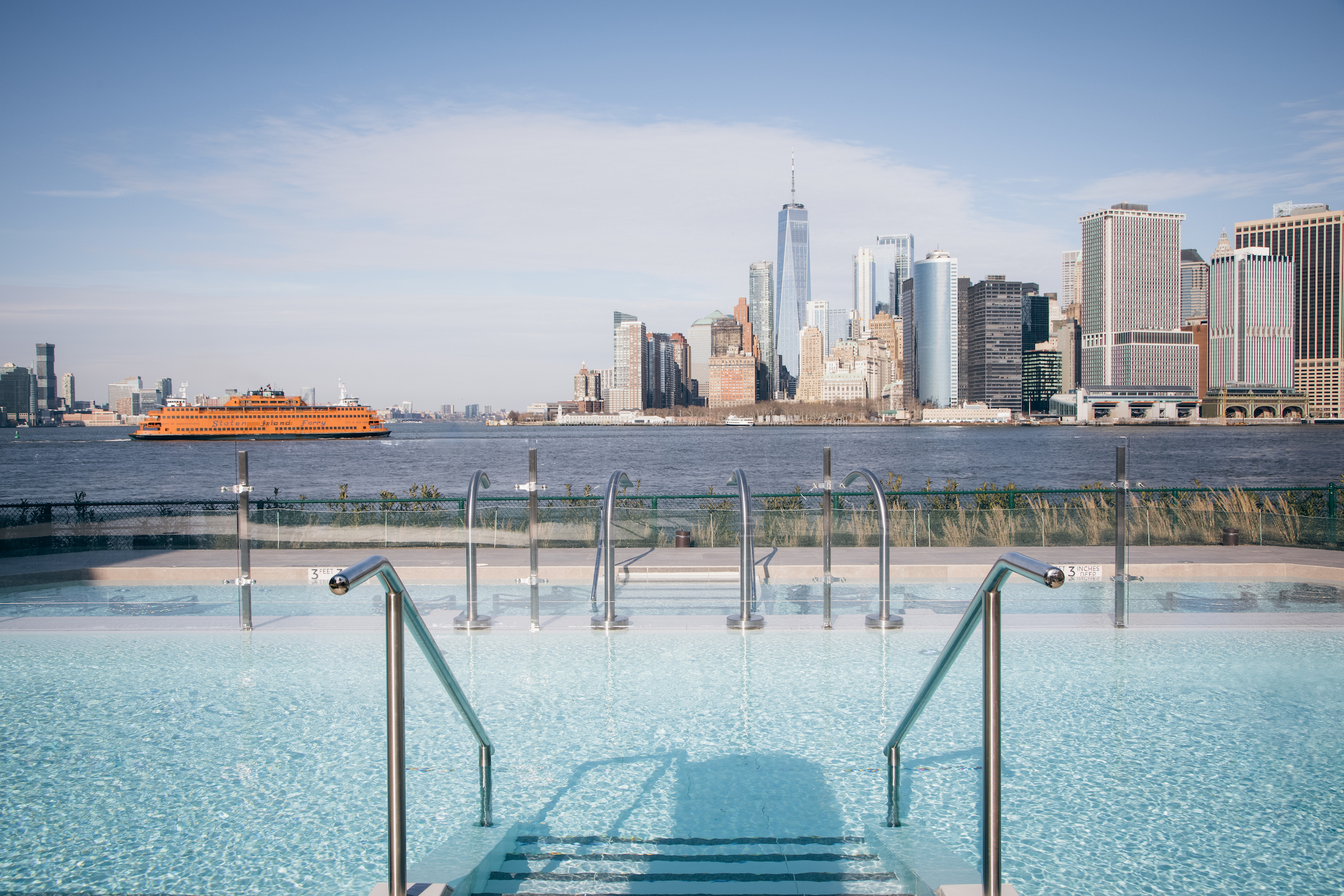 New York is a city with few extant secrets. Every inch has been built up, crawled over, and occupied. But for years, Governors Island, which occupies 172 acres in the Upper New York Bay, was terra incognita to most New Yorkers.

A military installation since 1776, and the home of Fort Jay since 1806, then passed through the armed forces from Army to Coast Guard, the island remained off limits to most civilians. Then in 2003, it was returned to the city of New York and her people, and the long and laborious process of adapting it for peacetime pursuits began. Today there’s an arts center, an annual Jazz Age lawn party, glamping, a high school, and vast swaths of green space meant for picnicking and strolls. But perhaps the most peaceful element opened in March: the QC NY Spa.

It is hard to imagine what soldiers from grunts to the Coasties who were stationed in the barracks, now transformed into the Italian-based spa, would say if they saw hassled New Yorkers soaking in the two sleek azure pools set into what was once their mustering ground. It’s not hard, however, to imagine the wonder the soldiers would feel if they knew that their rooms would be turned into a labyrinthine and sprawling spa consisting of themed saunas, Vichy showers, foot baths, and relaxation rooms. Almost certainly an expletive would be used.

In some ways their surprise is no different than most of us might feel stumbling into the spa today. Firstly, taking the waters, a hallowed tradition among spa-goers since Roman times, isn’t exactly de rigueur in the Northeast. America’s spa culture is largely rooted in luxury hotels and focused on treatments rather than the nearly all-day affairs of soaking and lounging that characterize European baths. (Though this is changing too; see facing page.) Secondly, that QC Terme, a small Italian company, whose first baths were in that country’s Bagni di Bormio in the Italian Alps, was tapped to rehab three large barracks — Numbers 112, 113, and 114 — in an ambitious five-year $50 million plan in the last great stretch of open space in New York beggars belief. Thirdly, and most important, it is a wonder to find such endless relaxation within a stone’s throw of those skyscraper stalagmite shards of the Manhattan skyline.

When the weather warms, two pools, beset by lounge chairs, will steam in the chill morning air. (They are not yet open.) The baths aren’t quite thermal but they are full of various salutary minerals. (And anyway, New York State law requires pools to be chlorinated.) Steam rooms and saunas occupy the barracks rooms, some themed, as in a slightly Germanic pine-sauna or a “Sauna in the City” that features cutouts of skyscrapers. (Today, only building 112 is open though the other two are slated to open shortly.) There is a rosemary-infused botanic steam room and a marbled Scottish-themed one. Relaxation rooms feature, among other frivolity, hanging cocoon chairs, harem-style pillows, and an “illusion” room that appears upside down. There’s a fireplace room, and one fitted out with a gramophone, and one meant to sit in and record one’s memories of the day. Spa-goers can travel an endless circuit of steaming, showering, and lounging for hours, made all the more relaxing as it unfolds in the shadow of the busiest metropolis in the world.