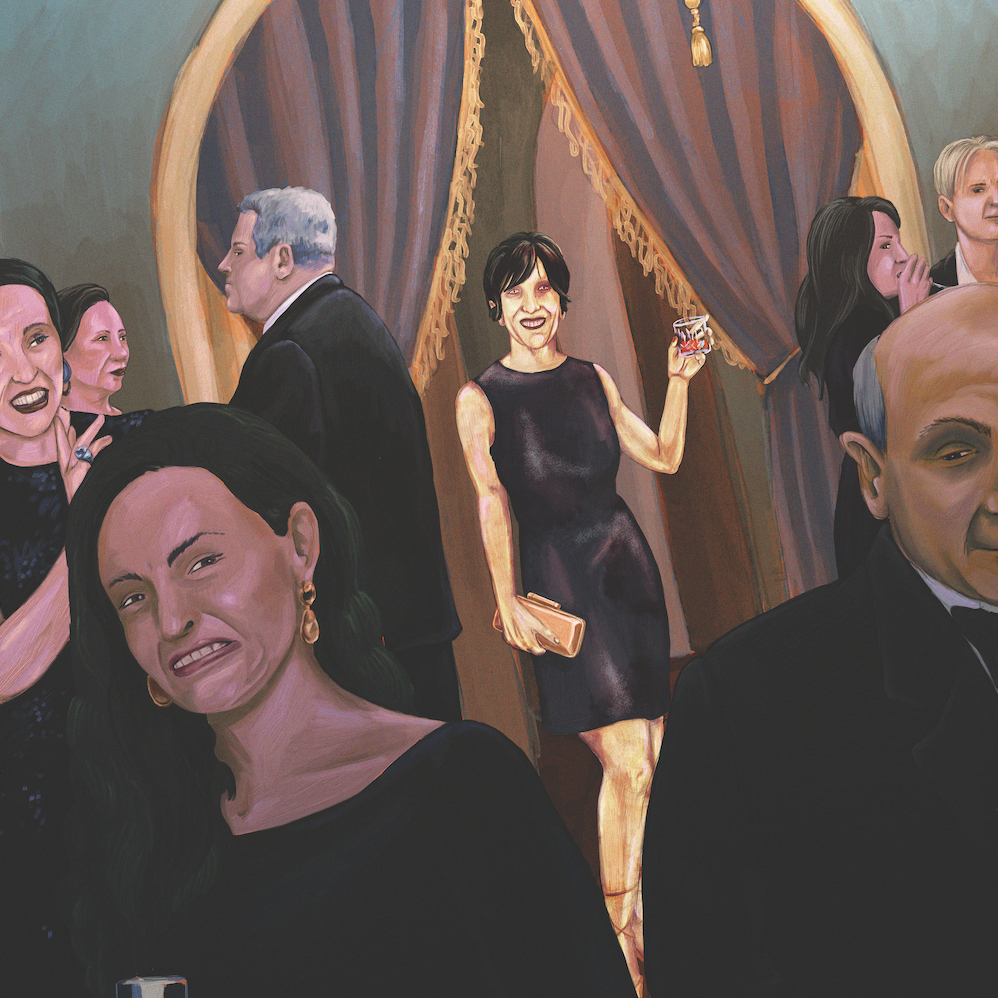 Return of the Social Dead: Could Ghislaine Maxwell Come Back?
Living

Return of the Social Dead: Could Ghislaine Maxwell Come Back?

Maxwell, like many wealthy pariahs before her, is laying out a detailed strategy for getting out of jail and back into high society. Could she possibly pull it off?
By Lisa Marsh
Illustration by Michelle Kondrich

Sitting in her cramped isolation cell in Brooklyn’s Metropolitan Detention Center, it is possible to imagine Ghislaine Maxwell’s mind is elsewhere.

She’s not thinking about the unforgiving prison lights, which are kept on around the clock, because correction officers fear she is at risk of committing suicide. She’s not thinking about the inedible jailhouse food, which has caused her weight to plummet; the mice and other vermin that notoriously infest the East Building in which she is held; or even the stench from leaking toilets on the floor above.

No, she is dreaming of a life outside jail, back in some luxurious quarter of Manhattan. And perhaps even — this would be ultimate — returning to the sophisticated social circles where she once rubbed shoulders with princes and presidents.

Because, as we know from her attorney’s multiple filings, each one laying out more detailed conditions under which the onetime socialite might be granted bail and be sprung from prison, Ghislaine Maxwell has a comeback plan.

Like so much about her, it is stunningly audacious. The question is, could she possibly pull it off?

The former lover and longtime companion of Jeffrey Epstein was arrested in July 2020 on multiple charges related to the trafficking and sexual abuse of women and young girls. She was shocked — shocked — by the accusations, denying culpability in statements and pleading not guilty to each of the charges.

At the original arraignment, her attorneys proposed she be released on bail and held under house arrest in a luxury Manhattan hotel. This comes after she was apprehended at her home in New Hampshire after evading the FBI for weeks, with passports from three countries in her possession and $20 million in assets linked to her. That offer was denied because she was deemed a flight risk.

In December, her second application for bail came with more offers — home confinement at a friend’s New York City residence enforced by electronic monitoring. Her close ties to the United States, including husband, tech CEO Scott Borgerson, would keep her there, her lawyers argued. And she would foot the bill for private security guards to monitor her whereabouts. Denied.

March brought a third request for bail with the offer of a $28.5 million bail package put up by herself, her husband, and various wealthy associates. Under this plan, she would also renounce her British and French citizenships, and move most of her and her husband’s assets into an account monitored by a retired federal judge. Denied.

April’s appeal of her third request came because her lawyer said guards in her Brooklyn jail were keeping her awake at night to ensure she does not commit suicide. She appeared with an unexplained bruise under her left eye and was reticent to explain how she got it. She reportedly told lawyers the bruise could be from shielding her eyes from the cell’s bright lights. Also denied.

While plotting her next bail offer and awaiting her trial, chances are good she’s also formulating how she will reclaim her reputation and status as the mysterious socialite who was welcomed to dinners and events up and down Park Avenue. It’s probably not unlike the future Epstein envisioned for himself after he pleaded guilty in Florida state court to two felony prostitution charges in 2008 and served a 13-month sentence. While he served his time at the Palm Beach County Stockade, instead of the usual state prison, he received all kinds of extra services, like a cushy work-release program where he was able to use his own driver to be taken to his office and appointments.

Given that treatment, it’s not surprising he expected to be welcomed back into his social circles.

Meet four former high society fliers who fell from grace…and then worked their way back up to the top.

“No one really knew that much about Epstein’s legal troubles in Florida,” says Frederick Anderson, a fashion designer, who is extremely NYC–Palm Beach social. “Even in Palm Beach. He had a lot of friends and they kept it very quiet.”

Epstein even had meetings to strategize his return to social acceptance. R. Couri Hay, a seasoned society publicist, prepared a multi-step road map that would refresh and restore Epstein’s reputation. Although Epstein never hired the adviser, the plan included a stint in rehab for sex addition; spiritual counseling from a rabbi; committing to Warren Buffett and Bill and Melinda Gates’s Giving Pledge to donate the bulk of his wealth to good causes; and, of course, a splashy sit-down interview with a sympathetic journalist.

In the context of other former social pariahs, who did their time and were then welcomed back into New York society, it didn’t seem like such a crazy idea.

Martha Stewart went to jail in 2004 for lying to the Feds and emerged to lead her company to financial comeback. It doesn’t matter that she’s now nearly 80 — she’s as hot as ever especially with the cannabis cred she gained from her party show, Martha & Snoop’s Potluck Dinner Party.

Michael Milken’s run as a real-life Gordon Gekko ended in 1989 when he pleaded guilty to securities and reporting violations; he went to prison in 1990, and his name became internationally synonymous with financial wrongdoing. Upon his release, receiving a diagnosis of advanced prostate cancer proved to be a lemon he turned into lemonade. Now he is regarded as a leading philanthropist, having raised tens of millions for medical research, and is a Hamptons mainstay with his foundation’s annual fundraiser.

A. Alfred Taubman, a convicted price fixer between Christie’s and Sotheby’s, served jail time in 2002. He also doubled down on philanthropy as a way back into society’s good graces, donating enormous sums to the University of Michigan, Brown University, Harvard University, Lawrence Technological University, and the College for Creative Studies in Detroit.

Should Maxwell emerge from this legal trouble unscathed, is it possible she could return to the cocktail circuit around which she once swanned? She does have a long history and vast social network, which could work to her advantage.

“Ghislaine always had a bit of mystery about her,” says Euan Rellie, investment banker, English expat, man-about-town and host of many dinners, who ran in the same social circles as Maxwell. “In the old days, people liked that, that her dad [media mogul Robert Maxwell] was faintly disreputable. People like colorful, flawed, and roguish, and will even accept a little bit of dishonesty, socially.

“Her father’s death was so tragic [the elder Maxwell died under mysterious circumstances in 1991]. We all felt sorry for her. She was always popping in and popping out,” says Anderson. “My friends would get excited when ‘Ghislaine’s in town’ and she’d come to dinner.”

There was an unsavory undercurrent to her interactions, Anderson admits, which was a red flag for him. “She was always trying to get her friends to apply for passports from that island they had [Little Saint James in the U.S. Virgin Islands, which was owned by Epstein]. If they had enough citizens, they could claim it was a territory,” he explains. “I did always think it weird that she was the go-to girl if you wanted tickets to Victoria’s Secret shows.”

It would be a hard sell, “for her to come back,” Anderson theorizes. “There would have to be an anchor — someone to stand up for her. She would have to confess or do something spectacular and repent.” He added, “The way she’s complaining about things in jail — she has no way back,” as it smacks of entitlement, not contrition.

“America, and New York especially, is a very forgiving place, with generosity and openness,” Rellie explains. “I think what Maxwell has [allegedly] done are things that won’t easily be forgiven. I think the #MeToo movement is causing a serious long-term social realignment… Anyone taking advantage of young women is a social crime, and it’s cast in a very different light today.”

He added, “We all know financiers who have skirted close to the law. One financial crime can be forgiven. But we won’t accept predatory behavior — that’s my thinking.”

Even as Maxwell’s return to Upper East Side society seems unlikely, others who have recently had their reputations singed for various (non-criminal) reasons are quietly slipping back onto the circuit.

One prominent example is Stephanie Winston Wolkoff, who spilled secrets about her disastrous working relationship with the Trump White House in her book Melania and Me: The Rise and Fall of My Friendship with the First Lady. When the book first appeared, many wondered if such a detailed kiss-and-tell would be social suicide, or a lifeline from Washington’s “swamp” back to New York.

“She told way too many secrets,” Anderson says, “because with these people, mum’s always the word.” But, he added, “Stephanie is solid. She’s not a criminal and she has plenty of friends. There are no hurt feelings with her. She will ease her way back in.”

For a certain inmate currently moldering inside the MDC in Sunset Park, such a controlled social reentry must seem like a shining road map. Add that to the plan.