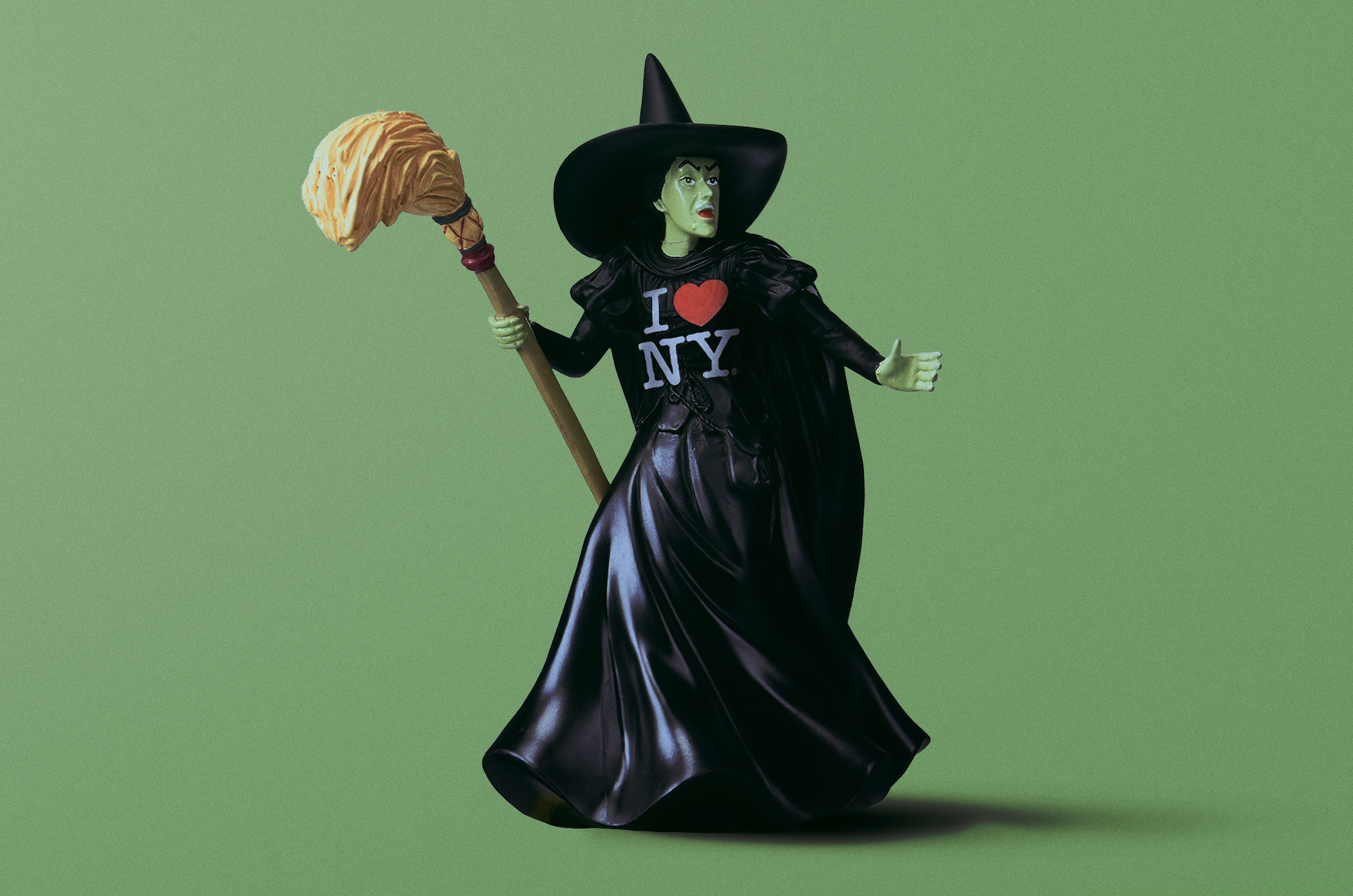 The Hot New Trend on the Upper East Side? Witchcraft
City Life > Living

The Hot New Trend on the Upper East Side? Witchcraft

For a growing number of fashionable young people, being a witch isn't just for Halloween. Avenue investigates the occult on the Upper East Side
By Mike Albo
Illustration by Nicolas Ortega

Twenty years ago, Hilary Gurley buried a box containing Donatella Versace’s hair in the little garden plot in front of her West Village apartment. By dabbling in witchcraft, the petite, impeccably dressed blonde was ahead of the curve.

In 2014, the Pew Research Center reported the United States’ adult population of pagans and Wiccans was about 730,000 — on a par with the number of Unitarians. Today, there are numerous witchy hashtags on Instagram, many popular with the young and affluent.

But in 2000, Gurley was 24 and single, and had just been offered a position at Versace in Italy — by Donatella Versace herself. She quit her plum job at LVMH, gave up her apartment, and moved her stuff into storage. Her friends gave her a goodbye party, and her two cats had visas and kitty Xanax for the flight.

Then the trip, and the job, were mysteriously put on hold. She had no idea why. Ten days passed. She contacted a lawyer.

“It turned into a long, drawn-out lawsuit that led me into debt,” says Gurley.

In a daze, wandering through the West Village (before Marc Jacobs moved in), she often passed by a curious store: Morgana’s Chamber. “I would see interesting people with crimson hair. Blackened eyebrows, crystals and candles in the window. I never in a million years thought about going in.”

This time, though, nearly homeless, she went inside. “I was probably wearing a seersucker A-line dress and Manolo Blahniks, with a blonde flip and carrying a Nantucket lightship basket.”

She gravitated to a thin chapbook and bought it. In the book, she found a spell that claimed to be able to establish closure.

There were so many things she needed to gather: candles, oils, a photo, a lock of hair. “I found a picture of [Donatella] cut out from a magazine. My friend who introduced us was one of her hairdressers. At some point he had given me a hairbrush and hair clip that she had used. I had never thought of it until then. It all had to be bound up into a package or parcel that I had to anoint with the oils and wax drippings and then bury under a full moon. I remember being on Charles Street late at night, like with a spoon in the little garden in front.”

She had never imagined practicing witchcraft. “I was raised a Christian. I wasn’t thinking about this as a real thing. No disrespect to witches whatsoever. But I felt like I was at my wit’s end. I was broke, I was in debt. You start questioning your sanity.”

Salem, Stonehenge, Joshua Tree — there are places in this world that immediately come to mind when people think of witchcraft. But Manhattan is also steeped in The Craft, spells are cast every day, and its streets are lousy with witches.

“I think it’s pretty much crawling with them. They show up when you need them,” says Laurel Sparks, a professor and practitioner of Esoteric Magic.

“There is a long history of mystics and occultists having a stint in New York City,” she adds, and according to those who practice, the island is throbbing with power.

Some explain how the city is built on carnelian quartz — a powerful conductor of energy. Others mention how the city’s “ley lines” match up on the island in significant ways.

This occult practice of lining up prominent structures and historical landmarks (also called “sacred geometry,” or, by the more critical, pseudoarcheology), finds plenty of important spots in the Upper East Side — notably Cleopatra’s Needle in the Metropolitan Museum of Art, the United Nations Building, and 432 Park Avenue, a newer addition to the list that has become a locus of occult conspiracy theories on a par with the World Trade Center.

Why that address in particular? Sacred geometry expert Scott Onstott posits in his book Secrets in Plain Sight that the human heart beats 4,320 times an hour; 432 x 432 is the speed of light in miles per second; and “in the Hindu vedas, which are among the world’s oldest sacred texts, the Kali Yuga (‘the age of vice’) is said to last 432,000 years. Most interpreters of Hindu scriptures believe that Earth is currently in the Kali Yuga.” (Now you know.)

Whether or not you personally subscribe, however, there’s no doubt the Upper East Side casts a powerful spell on believers. Witches (and charlatans) abound. The Grailwood Coven has been known to celebrate the pre-Christian pagan version of May Day in Central Park, in the shadow of Fifth Avenue’s multimillion-dollar co-ops. (Picture Midsommar, but without the murder and mushrooms.)

Then there was the case of Victoria Nicholes, a sorceress who operated out of a fortune-telling parlor on Lexington Avenue and East 66th Street. In 2016 she was busted by cops for swindling a 35-year-old client out of more than $62,000 by convincing her she was possessed by a demon baby and needed an exorcism.

But it’s not only the wealthy in the neighborhood who seek out help from the spirits. In her ethnography, “West African witchcraft, wealth and moral decay in New York City” Jane Parish describes the many “anti-witchcraft” shrines uptown. These shrines — which offer protection against evil magic and curses for an offering of $10 or $20 — are constructed and patronized by the immigrant workers who serve the local upper crust.

One shrine priest, Parish writes, “spoke of how witches had infiltrated some of the most expensive condos on Lexington Avenue and patrolled the corridors of these apartment blocks waiting to attack their victims — the wealthy, whose failing moral compass and greed had left them exposed to evil forces.”

In fact, anxiety over wealth can drive all classes to seek protection — or help — from witches.

“Sometimes there’s an underlying guilt that is unspoken if they haven’t made their own money,” says Scott Clover, a New York intuitive energy healer.

“I’ve had a ton of moms from uptown come to me,” says Hillery Sklar, a healer and witch who was born and raised in Murray Hill. “One brought the other and then another from uptown.”

Dr. Kate Tomas, who holds a PhD in Theology and Christian Mysticism from the University of Oxford, is a psychic, witch, and women’s spiritual empowerment mentor who worked in Manhattan for nearly two decades. Also known as “the luxury witch,” she now resides in the UK and offers coaching through her website.

“It’s common, particularly in Manhattan, that most of the work is around money, unsurprisingly, and divorce,” she says. “Women really want to hex their ex-husbands. This one woman emailed… she is very well known the art world… she said, ‘I’ve got his semen, hair, an old sock of his…. okay, what can you do?’ She had a vial with this semen in it!”

Unfortunately for the vengeful, however, Dr. Tomas does not encourage using witchcraft for such purposes.

These days, you may know a lot of witches. It’s very trendy. Witchcraft has come out of the broom closet and become something to talk about over brunch or on the Jitney.

Embracing this aesthetic is The Numinous, an uptown-centric online community, which was created in 2012 as a place where, according to its founder, “Céline shoes and The Celestine Prophecy could exist in perfect harmony.” It’s like The Wing, but with incense.

But this new popularity makes some seasoned practitioners wary.

“It’s funny, 18 years ago, it wasn’t safe for me to identify as a witch. It would prevent me to get into universities, book publishers, clients I wanted to work with,” says Dr. Tomas. “And about five years ago I started retreating from saying I was a witch because it’s become so common, and I wanted to differentiate what I do from all that.”

The influx of initiates has prompted an increase in amateur spell casting that many professionals regard as altogether too casual.

“When you are navigating the spiritual realm, I think you are playing with fire. It’s not advisable to wing it,” says Rebecca Fey, a green witch and teacher. “You have to be very aware. When you open a connection to the other side, any spirits can come through. Like in Beetlejuice.”

In other words, be careful what you conjure. Fortunately for Ms. Gurley, the spell she cast on Donatella Versace all those years ago didn’t have evil intentions. But she still worries it caused some witchy ripples.

“A couple weeks later, this crazy thing happened. There was someone else in my life I was having differences with through work. I was thinking ‘If she would just back off, my life would be easier.’ Then I found out that this person had a horrible accident in her apartment. The pipes burst. I felt so horrible that I immediately went to church,” Gurley says. “But she was also a Vogue editor.”

So she probably deserved it.