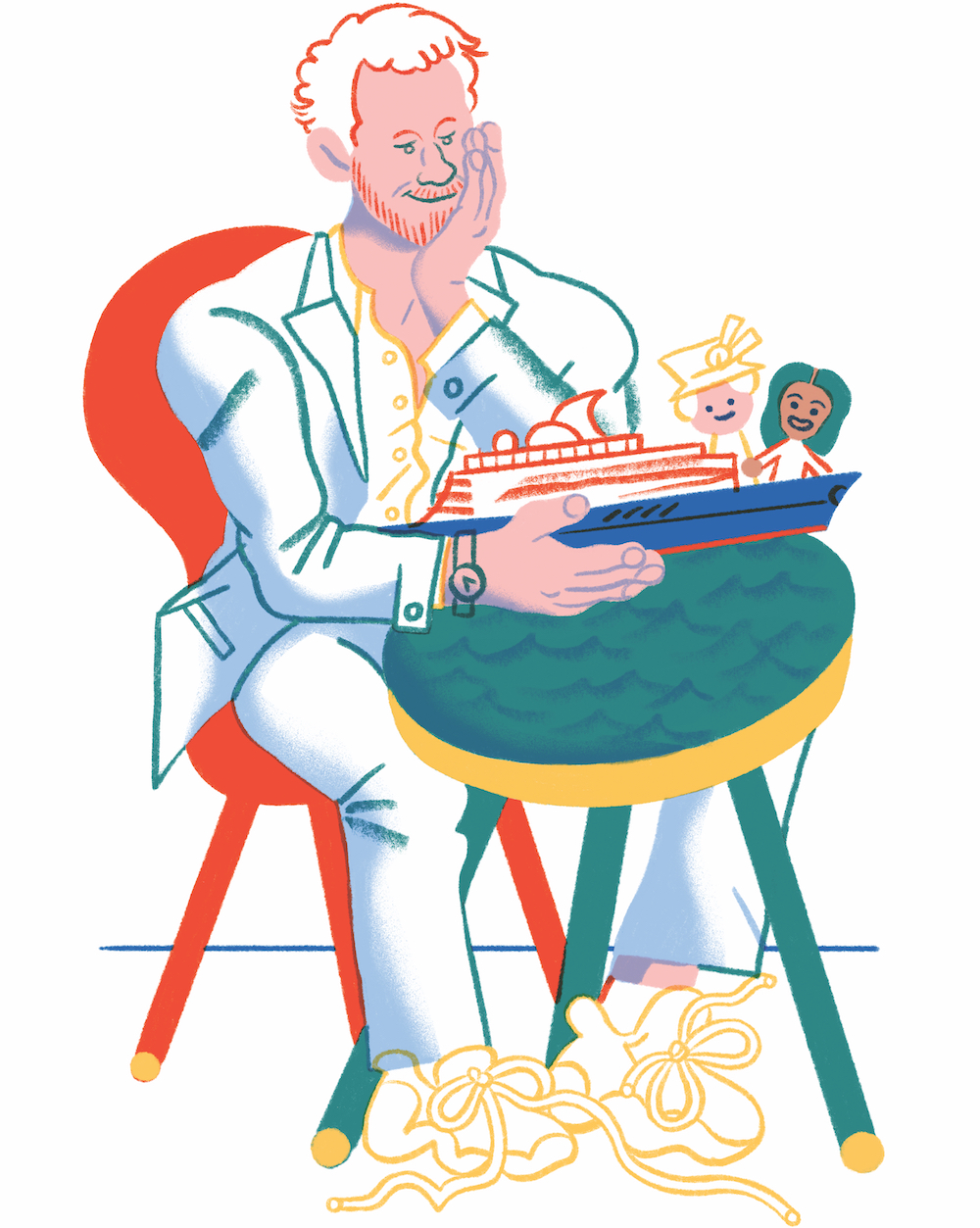 The Fresh Prince of Hot Air

Monday
I must say, this Netflix bag is a jolly good wheeze. The Duchess is so much more relaxed now that we have cameras everywhere. And the best thing is, she says as producers, we’ll get to keep the Oscar!

Tuesday
Met Archie’s new agent today — she says People magazine wants to put him on their “Two Under Two” power list of Hollywood babies. Smashing! We also saw prototypes for our new product lines, including bobbleheads of the Royal Family. The Duchess joked that their heads should be detachable, “just in case history happens.” I do adore my darling’s American sense of humour!

Wednesday
Some more good news — the Duchess tells me she wants to get the boat out. At last, an excuse to bring the Royal Yacht Britannia out of mothballs! Grannie will be so pleased, one can’t wait to tell her on the weekly family Zoom. Bit of rummy with the “Two Under Two” list. Apparently, the other child is something called a Duggar, and that’s a problem? Archie’s agent says not to worry, she’ll see if Madonna has a spare baby — or if not, the Scientologists are bound to have one.

Thursday
Honestly, one doesn’t know why one bothers with these Zoom calls if the family is just going to be rude. One can always tell when Grannie has been into the sherry. She starts making jokes about naming me after Henry VIII and asking when she can expect “the first” divorce. Then Kate accused the Duchess of making her bobblehead fat on purpose, and as soon as Grandpapa started bringing up Rudyard Kipling, one knew it was time to ring off.

Friday
Oh, good show! “Two Under Two” is happening again, thanks to our marvelous new friend, Angelina Jolie. A frightfully good sport, she has agreed to adopt a baby during her ayahuasca retreat in Suriname to make sure Archie stays in the “right” company.

Saturday
Unbelievable. Angelina adopted twins — pushing Archie off the list entirely. One is beginning to suspect that friendships in this town might not be what they appear. Silver lining: Archie’s agent has an audition lined up. Apparently, it’s an action-oriented Saved By the Bell prequel called Day Care: Bayside, and he’s up for the Mario Lopez role. One could not be prouder!

Sunday
Another blow. Now the Duchess is telling me she didn’t say she wanted to “get out the boat,” she said, “Get out the vote.” Complete miscommunication, she said. Just like the time she accidentally sent her headshot to Britain’s Royal Mint, with a note saying, “In case you want to put someone cuter on the coins, xoxo.” It does pain one that the Duchess continues to be so misunderstood. But no doubt once the public gets to see the real us on Netflix, all will be resolved.Also, by the by… what’s a “vote”?

Editing 2020 Horoscope Predictions for the Year that Actually Happened