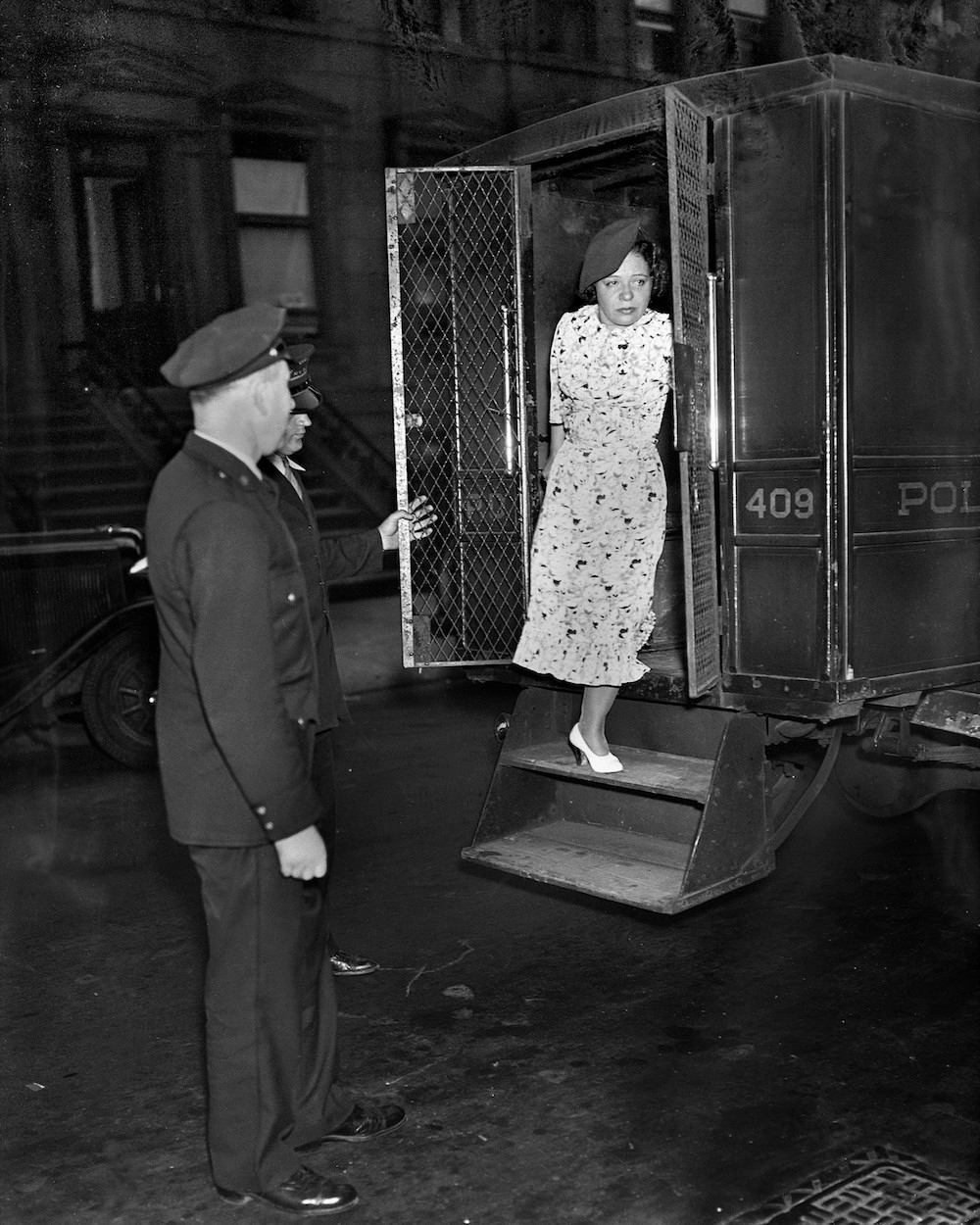 Adler was born, one of nine siblings, into a devout, tight-knit Jewish community at the turn of the century in what is now Belarus. Her father, impoverished, devised a way to send his children to America one at a time. At 13, Adler was the first to go.

She soon settled with family friends in Massachusetts, but the respite was short-lived. Despite a steady job at a paper factory and classes at night school, Adler was too ambitious to stay put. It didn’t help that her hosts were dreadfully cold to her. So she decamped to Brooklyn, staying with family. This time it was a corset factory in which she worked, making a paltry $5 a week. The hours were long, and the exhausted Adler often fell asleep at night school. Ultimately, Adler quit her studies, instead finding freedom in the dance halls of Manhattan and the amusements of Coney Island.

Her conservative relatives tolerated it, until a young Polly spent a full night out with the not-yet-famous Broadway star Harry Richman. At only 19 years old, Adler was out on her own, with nothing but her own wits to ensure her safety.

“Polly lived in a time of tremendous hypocrisy… men were far more willing to pay women for access to their bodies than for their minds,” Debby Applegate, author of Madam: The Biography of Polly Adler, explains. “She was one of millions of women who found themselves getting the short end of the social stick, who decided, ‘To hell with this, I’m going to take care of myself.’”

Adler moved to Manhattan, living in a luxurious Upper West Side apartment with an aspiring singer. “It was a sweet story the way she told it, but not a very likely one,” writes Applegate. “The details of how [Adler] found herself living with a showgirl in a deluxe apartment on Riverside Drive didn’t add up. How an unemployed singer and an out-of-work factory worker managed to pay the rent on a nine-room apartment… she never even tried to explain.”

Murky details aside, Adler’s entrée into the underworld was complete by 1920, when she was running her first brothel, working for an amateur “wise guy” named Nick Montana. The timing was auspicious. It was the same year Prohibition was passed, a boom for enterprising criminal elements. “If I had all of history to choose from, I could hardly have picked a better age in which to be a madam,” she would later write. While Montana handled the money and rent on an apartment in Morningside Heights, Adler procured the girls and kept the place running. With her acquisitive eye and keen business sense, it wasn’t long before she started averaging $100 a week.

Naturally, as her involvement with the underworld increased, so too did her brushes with the law. In December of that year, Adler was arrested for the first time when a pair of vice squad officers burst into the apartment and took her and another girl down to the station. Montana bailed her out, got her a lawyer, and Adler managed to evade charges. Nevertheless, it proved a harrowing experience. More pressingly, she had been outed to her neighbors. But the experience taught Adler an important lesson: now she knew to grease the palms of dirty cops, and developed what Applegate calls a “sixth sense for danger” in avoiding future raids.

Adler was becoming a pro. She learned to keep extremely detailed notes about her clients and their preferences; she weeded out undercover cops; and she started keeping her brothel open 24-hours a day. “She was really good at all the bourgeois virtues: she could save money, she could do accounting. She knew how to run a home in a way that was homey and warm,” explains Applegate. “But more importantly, she was good at her business in a business filled with people who are not good at running businesses.”

Soon Adler’s brothel was a favorite for a who’s who of the underworld. Gangsters like Arnold “the Brain” Rothstein, Lucky Luciano, and Bugsy Siegel, among others, became regulars at her house. But her fans weren’t only from the shadowy reaches of the mafia. Among her famous clients were vaudevillian-turned-gossip columnist Walter Winchell, industrialist Jock Whitney, and humorist Bob Benchley, usually with fellow Algonquin Round Table member Dorothy Parker, who would chat with Polly while the men were in flagrante delicto. Though never substantiated, there were rumors she was visited by a Vanderbilt, a Rockefeller, and even then-governor Franklin Delano Roosevelt.

“They would just stop by for a nightcap,” says Applegate of Adler’s more prestigious guests. “Or they would stop by because they could party there without people peering into their business unlike at the Stork Club or the more fancy nightclubs.”

Part of the draw was Adler herself — she was lively, entertaining company. Oscar-winning songwriter Jimmy Van Heusen described her as “warm and funny, smart and gutsy and fun to be around.”

As the money rolled in, Adler invested in her own brothels, setting up shop in upscale buildings across the city, decorating them with themed rooms (like a bar inspired by King Tut’s tomb), and providing the absolute best hooch and food available. She also slowly invested back in herself, buying finer clothing and springing for nice haircuts and manicures.

By 1927, she was pulling in an estimated $60,000 annually — about $900,000 today. Her success was strong enough to withstand the initial blow of the stock market crash. In fact, by 1930 so many women were coming to her for work that she was turning away upward of 40 for every one she hired.

But as New York vowed to clean itself up, the authorities began to push Adler out. Though under Mayor Jimmy Walker Adler had been able to operate her business by paying off cops and politicians, the end of Tammany Hall meant the end of Adler’s golden era. In 1931 she was dragged into the Seabury Commission, an investigation into corruption in the city. And in 1933, under the administration of the new mayor, Fiorello La Guardia, Adler spent 24 days in jail. Throughout the decade, Adler was hounded by police and frequently arrested. Adler, whose name was splashed in the papers each time, found it difficult to get straight work. She was a branded woman. By 1945, she shuttered her doors in New York for good and moved to California.

Out West she had a new lease on life. After finally graduating high school at the age of 45, Adler worked with a ghostwriter on a new venture: her memoir. After being rejected by nearly all New York’s male publishers, who were fearful it would tarnish their reputations, literary agent Ann Watkins and publisher Mary Roberts Rinehart saw it for the gold mine it was. They were right. When the book, A House Is Not a Home, was finally published in 1953 it was an instant hit, selling two million copies. It even spawned a film adaptation with Shelley Winters as Adler. Unfortunately, Adler didn’t live long enough to see it. She died of lung cancer in Los Angeles at the age of 62 in 1962.

Despite her infamy in New York, the news of Adler’s death only garnered three sentences in the New York Times. Then, as much as now, outlaw women were rarely lionized into the pop-culture antiheros men of their age were. But Adler’s passing might have gone unnoted for other reasons too, namely that it complicates our romanticized notions of that Jazz Age.

“We think of that time as a time of glamorous nonstop parties. But somebody had to do the work,” Applegate says. “Looking at the mechanics behind the American dream, you can see how often the people who are making the world glamorous are actually poor young women being paid to provide somebody else’s pleasure, and how often these parties are a cover for shenanigans that we don’t like to look at.”

It is a thought that somewhat dulls the glitter of the Gatsby era, but it was the life of one of its most colorful characters.