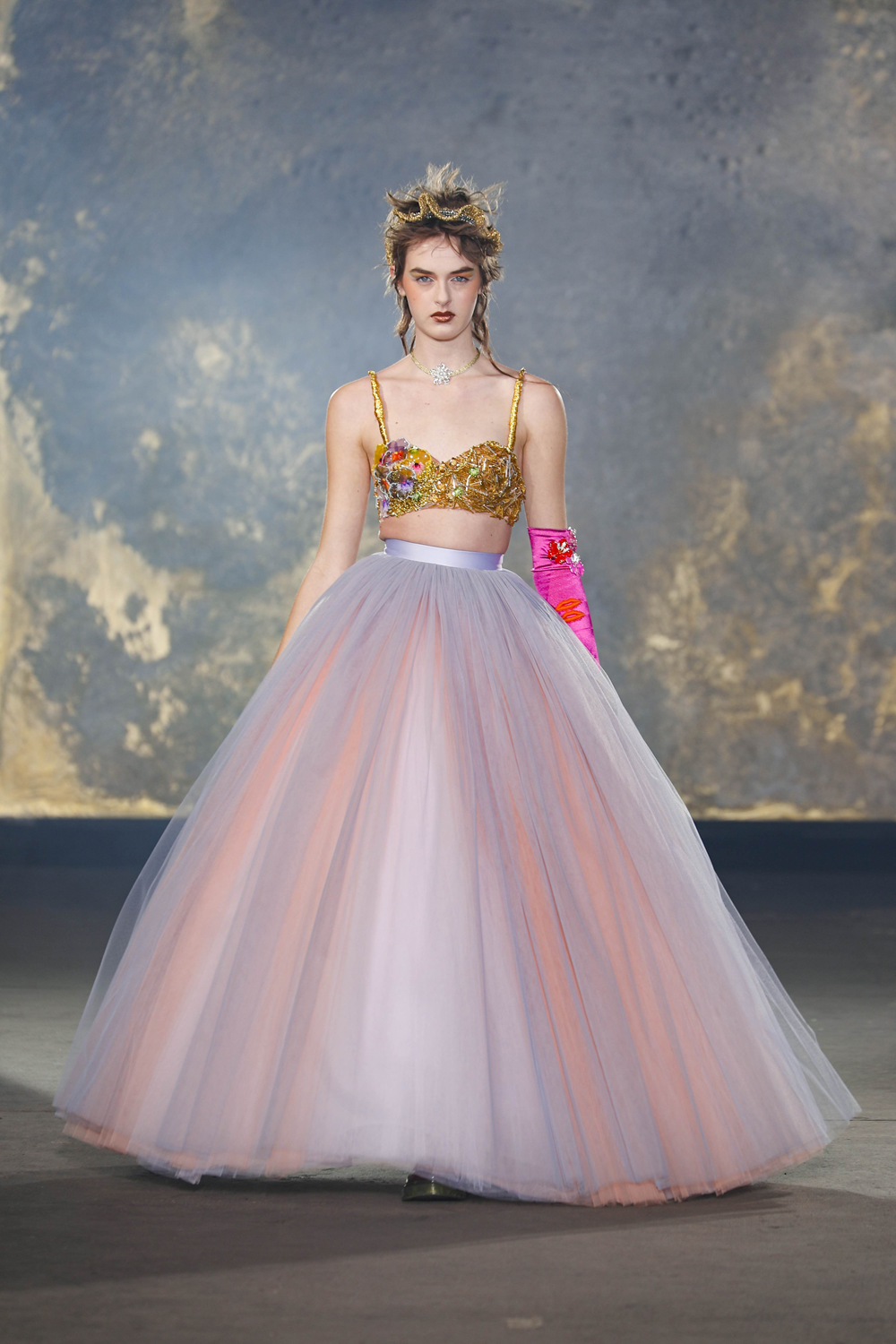 By Aria Darcella
PALACE INTRIGUE The Spring/Summer 2021 Valentino couture collection at the Palazzo Colonna in Rome. Image courtesy of Valentino.

There was something for everyone this season, although noteworthy trends included voluminous skirts, A-line silhouettes, and statement shoes. There was also quite a bit of femininity and a fun dash of weird.

Below, the complete collections of 10 major houses.

Chanel
Just before the end of the year, Chanel hosted a fashion show and —much to the internet’s delight — only invited Kristen Stewart. For its couture show the house expanded its guest list to include brand ambassadors like Penelope Cruz, Lily Rose Depp, and Vanessa Paradis, among others.

“I knew we couldn’t organize a big show, that we would have to invent something else,” creative director Virginie Viard said in a statement. “So I came up with the idea of a small cortege that would come down the stairs of the Grand Palais and pass beneath arches of flowers. Like a family celebration, a wedding.”

Schiaparelli
Daniel Roseberry has been busy. Earlier this month he created a custom ensemble for Lady Gaga’s inauguration performance. And before that, he created a custom Hulk-green Christmas dress for Kim Kardashian, which turned out to be a precursor to this collection.

Arguably, the clothes, while beautiful, have been overshadowed by the accessories this season. Roseberry and his team have always spun darkly whimsy out of gold and beads, but for this collection the extra-long finger caps, ear-shaped earrings, and aforementioned boots will absolutely be collectors items.

And according to a tweet from New York Times journalist Vanessa Friedman, clients are already placing orders for the unusable eyewear.

Fendi
Kim Jones made his debut Fendi this season, and the house made it a grand affair, holding the closest thing to a traditional show all week, complete with A-list models and an ornate set.

The collection itself was quite decadent too. The textiles in particular, were amazing, with velvet, draping and flowing woven jacquards, and beadwork appearing throughout. Capes, even ones made of organza, were a major element.

A sweet detail to note was that Jones paid tribute to his predecessor, the late Karl Lagerfeld, by reworking monograms from his final collection onto boots.

Dior
This was another collection that featured beautiful fabrics and lavish textiles. Through intricate weaving, hand painting, and lace, Maria Gazia Chiuri brought the art of Tarot cards and symbols of the zodiac into fashion.

She succeeds because her references are subtle. On first glance, one is immediately impressed with the decadence of the jacquards and cashmeres, and the delicacy of the light organza skirts. That there are curious details based on mysticism woven within is just an added bonus.

Valentino
This (mostly) subdue collection — at least by Pierpaolo Piccioli’s standards — was given an unexpected kick thanks to some outrageously high platforms. Pardon the pun.

Even without the shoes, the collection — with its streamlined silhouettes, soft color palate, and focus on tailoring — is incredibly chic. It suggests that couture doesn’t need to go gonzo to impress. There is an elegance in effortlessness.

Viktor & Rolf
Ignoring what I just said about Valentino, gonzo can also be a lot of fun! Viktor Horsting and Rolf Snoeren pulled together what they call a “Couture Rave,” in an attempt to manifest a lighthearted and fun mood for 2021.

The collection, as with their other recent couture seasons, is made out of upcycled and repurposed archival fabrics, creating voluminous skirts and ruffled ensembles that are a delightful mishmash. The enormous tulle skirts are a notable highlight.

But looking past the campy photos, one sees some truly stunning pieces. The feathery tuxedo dress? A classic. The leather mermaid-silhouette skirt? Fantastic. The tulle tops with artful yet strategic fabric placements? Really pretty.

Alexandre Vauthier
Things are a little bit glam, a little bit cool, and quite glittery in this Parisian ’80s nightlife-inspired collection. A particular highlight are the bell-bottomed disco pants, which are adorned with both sequins and fringe.

Vauthier also took the opportunity to launch his first-ever shoe collection — mostly comprised of boots — this season, which will be produced and distributed through a partnership with Giuseppe Zanotti.

Iris van Herpen
Titled “Roots of Rebirth,” the collection finds inspiration in fungi, roots, and spores. Van Herpen’s singular use of technology in her construction process lends itself well to the more esoteric aspects of her theme — specifically, how fungi form intricate, interconnected networks in the forest.

Through lasercutting, layering, and hand dying, beading, and pleating, Van Herpen’s work retains the futuristic aesthetic she is known for, while also perfectly evoking the natural organisms that initially captured her interests.

Armani Privé
Armani had fun with florals this season, embroidering flowers into the tulle of several gowns. They’re frothy and fun, and nicely offset the more grounded suits the label is known for.