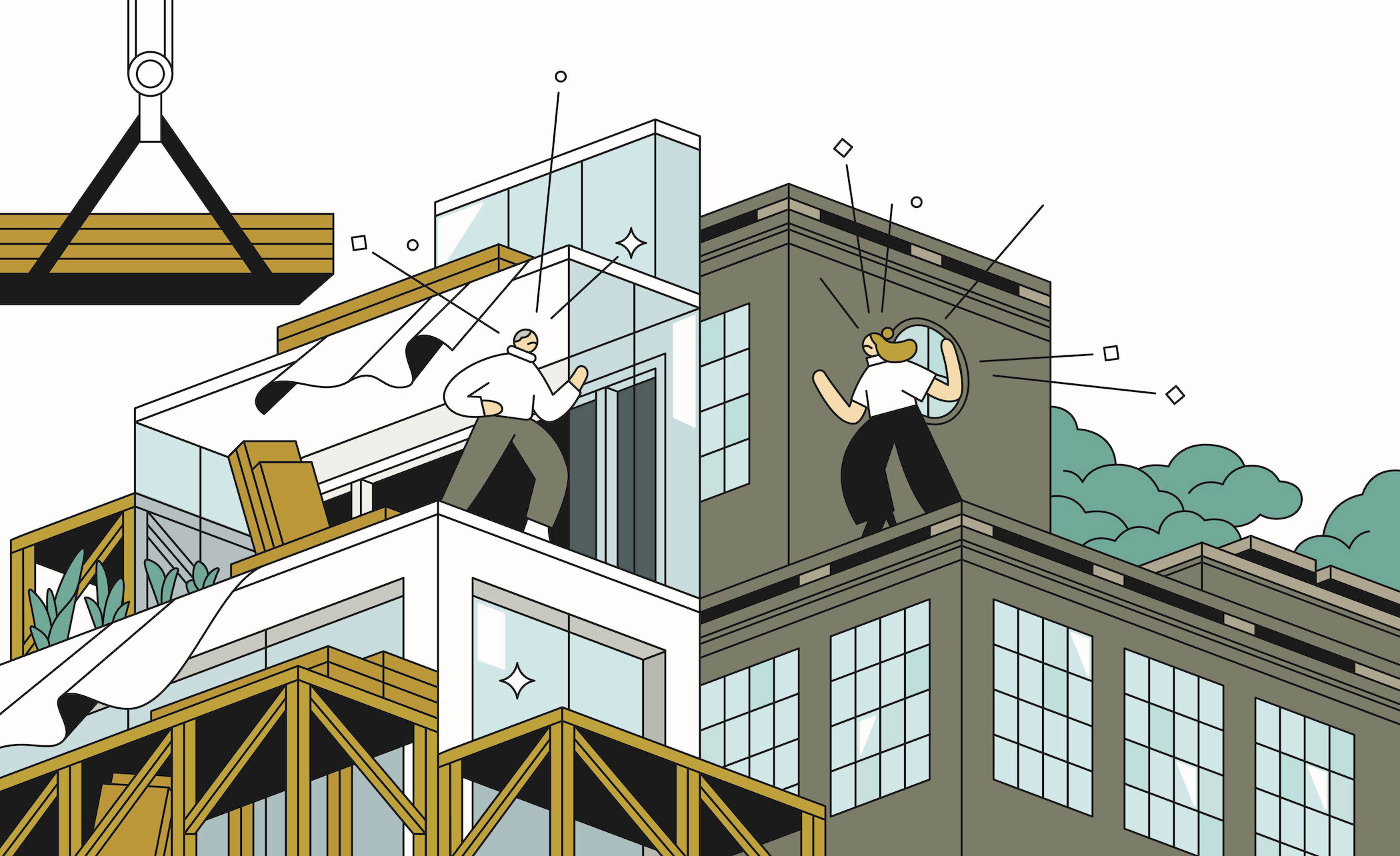 In a city where brawny mansions stand shoulder to shoulder, new money, old money, and no money often clash at the property line. A buyer may plunk down millions for a beloved home and, minutes after the closing, begin ripping out every trace of its previous occupants — jackhammering word of his arrival to the neighbors like Ozymandias declaring, “Look on my works, ye Mighty, and despair!”

Modern “renovation dramas,” much like the Restoration comedies of 17th-century England, have implausible plots that illustrate the vanities of their time. In our all-star revival of the form, the curtain rises at 23 Beekman Place, a five-story townhouse dating from 1867. Visionary architect Paul Rudolph bought the building in 1974, adding a four-story cantilevered glass-and-steel penthouse to create what would later be designated a New York City landmark. But after Rudolph’s death in 1997, its future seemed in doubt.

Hearing in 2000 that it might be torn down, Michael and Gabrielle Boyd, rescuers of other modernist masterpieces, bought the place for $5.5 million. Next door, at 21 Beekman Place, stood a Georgian mansion once owned by pioneering landscape architect Ellen Biddle Shipman. Just after the Boyds moved in with their two children, the Shipman House was purchased for $8.8 million by William R. Rupp, a retired Dow Chemical executive who had done well investing in Miami Beach condos and a Key West bar and restaurant.

Rupp was not talkative about his various arrests on disorderly conduct and battery charges, nor the time his bar partner, a fugitive drug dealer, was murdered by shotgun while sitting in Rupp’s new Cadillac Seville. But he encouraged people to believe his middle initial stood for Rockefeller and, not long after he and his longtime partner arrived at Beekman Place, he emblazoned the wrought iron gate with a four-foot-high “R.”

He also asked the Boyds to move an air conditioner that was impeding construction he planned. Apparently miffed by their hesitation, Rupp had bricklayers build a three-story wall that blocked several of the Boyds’ windows. The couple called it his “spite wall.”

When Gabrielle sprayed the workmen with water, Rupp called the cops; the Boyds claimed he later retaliated by throwing his German shepherd’s feces onto their property. “He is a neighbor from hell,” Michael told the New York Times, before giving up and putting the home on the market in 2001.

Rupp’s lawyer, Harry Issler, told me his client could be “a very difficult guy. He was a heavy drinker. I have no doubt that he did [throw the dog poop].”

Why did he build the wall?

“Because he could,” Issler replied.

Longtime observer of posh property lust Steven Gaines believes renovation dramas go beyond money. “It’s not just the rich,” said the author of The Sky’s the Limit and Philistines at the Hedgerow. “It’s territorial. Protecting our caves runs deep in our psychology. You guard every inch of your property.”

But wealth, ego, and Manhattan’s scarcity of space can amplify Stone Age urges. “The bigger the renovation, the bigger the potential for problems,” said Brian Meier, a top broker at Christie’s International Real Estate Group. “An average person renovates for resale. Wealthy people aren’t as worried about resale. [For example, R.E.M. front man] Michael Stipe wanted to put in a wall of windows so he could see the river. We pointed out the likelihood of a new building blocking his view. He said he’d have his view in the meantime.”

Energy billionaire Pierre Bastid and his jazz singer wife, Malou Beauvoir, had a more elaborate fantasy: a 10-by-60-foot garden-level pool, clad in marble and flanked by columns. The couple imagined that, after a swim, they might go downstairs to their theater and recording studio. All they needed to do was demolish everything behind the landmarked facades of two five-story brownstones at 48–50 West 69th Street, then drill almost 38 feet into Manhattan’s notoriously obstinate schist. The couple may not have anticipated the noise, vibration, and pollution their fantasy would cause. But after a 2019 Times investigation chronicled “how the whims of a plutocrat can upend the lives of an entire city block,” they sheepishly issued an apology, and promised to remedy the “disturbances.”

If they love this street so much why are they doing this to us?” West 69th Street Block Association president Eileen Vazquez told Avenue. “They’ve never participated in block activities. They haven’t made one donation.”

Such squabbles don’t only take place above the 59th Street parallel, however. Downtown’s creatives can also incite neighborhood blowback.

Meier recalled an investment banker renting his SoHo penthouse to rapper A$AP Rocky, who “spent a quarter million dollars renovating a rental — building a display room for his sneakers, for one thing. Except he forgot to ask the owner. That became a two-year lawsuit.”

Photographer Annie Leibovitz and artist-film-maker Julian Schnabel have also both infuriated neighbors over their renovations. Leibovitz’s cursed 2002 attempt to combine two Greenwich Street townhouses so damaged another home she had to buy it as part of a settlement in a $15 million lawsuit. But, with their owner overextended, all three properties then languished for years. The Greenwich Village Society for Historic Preservation staged a protest outside the compound where one placard read, “Annie: not a pretty picture.”

The group also took on Schnabel in 2008 when he turned a former horse stable on West 11th Street into a flamingo-hued condo wedding cake called Palazzo Chupi. Preservation society president Andrew Berman derided the new structure as “an exploded Malibu Barbie house” and “woefully out of context and a monument to this guy’s ego.”

Schnabel told the Times he erected his palazzo “because I could.” But the great man also added: “I’m sorry if I inconvenienced anybody.”

Perhaps pugnacious renovationists could take a cue from the spiritual journey of Kenneth Willardt, a top fashion and celebrity photographer. After Willardt set out to refurbish two former SROs on West 19th Street, inspectors blamed his workers for a burst water main in 2016, which forced both he and his neighbors (fashion exec Elana Waksal Posner and Lloyd Nathan, executive vice chairman of Avenues World Holdings) to vacate their homes. Even though Willardt called the deluge “an act of God,” relations on the block stayed frosty for some time thereafter.

Willardt sold the works-still-in-progress in January for $12 million, (having paid $4.6 million in 2012), telling me his “Kafkaesque” ordeal nonetheless “cost me millions and millions.” But it wasn’t the glares of neighbors that forced him out, he insists: in fact, he attained enlightenment in a Tibetan monastery. “I was sitting with 180 monks,” he said. “That’s when I found out: ‘I don’t need to win this. Letting go is winning.’”

In 1996, Martha Stewart began a legendary feud with her East Hampton neighbor, real estate developer Harry Macklowe, over trees he planted near their lot line. Stewart called them “inappropriate greenery” and the tit-for-tat battle that followed kept the tabloids enthralled for years. After she felled some of his shrubs, Macklowe tried to get her fined for an allegedly “unlawful” kitchen; they squabbled when he built a fence; his landscaper even accused Martha of pinning him against a gate with her Jeep Grand Cherokee, which she denied.

Such estates can assume outsize importance for owners who, having found success in the city, become lords of provincial manors. And it’s not uncommon for disputes to start out small, but become almost operatic in scale when both sides stand on principal.

Fred Drasner, for example, grew up in Brooklyn. But when the former co-publisher of the Daily News and co-owner of the Washington NFL franchise bought a 180-acre Dutchess County farm (named Cantagree in honor of his ex-wife), he embraced his role as a country squire. Drasner was continually improving his spread — filling its main house with George III furniture, turning an 1825 barn into a racquetball court, and adopting three camels, a dozen alpacas, and a handful of Nubian goats.

He also built an Adirondack-style hunting lodge on his property’s highest point, with a 12-person spa and a 28-by-16-foot fireplace. But according to his neighbor and pal, Jeffrey Gural, Drasner found the view wanting.

Gural, chairman of GFP Real Estate, told me, “Fred said, ‘Hey, you want to do me a favor? Why don’t you clear the fields, build a barn, and put your horses there. It’ll be much nicer for me.’”

Gural said Drasner promised to cover his costs if Drasner sold his farm. So, working with Drasner’s contractor, Gural created a fenced pasture and constructed a small barn.

When Drasner eventually sold the farm, Gural told him the improvements came to $181,551, and followed up with a demand letter after getting no response. “To my surprise,” he told me, “Fred turned it over to these high-priced lawyers.”

Drasner, who contended it was all Gural’s idea, won in lower court, and again on appeal — both expensive forays. “It was one of the strangest things I’ve ever seen,” Gural said. “I loved Fred. He had to have spent more on legal fees than he owed me.”

Drasner remains unbowed. “There was no deal,” he told me. As for his legal fees, he admitted, “It may not have made a lot of sense. But I’m not about to pay somebody for a fabrication!”

In the annals of rich neighbor spats, however, there may be none more bizarre or consequential than the feud between hedge fund billionaire Louis Bacon and Canadian fashion tycoon Peter Nygard.

The 14-year fight started when Bacon modified a driveway the two properties shared in the Bahamian enclave of Lyford Cay. Nygard objected, claiming the work created a fetid puddle. Bacon countered that Nygard had illegally dredged sand to expand his property. In an asymmetrical response that he lived to regret, Nygard then preposterously accused Bacon of arson, murder, and chumminess with the Ku Klux Klan. The publicity the dispute attracted also drew attention to Nygard’s behavior with teenage girls, resulting in US federal prosecutors charging Nygard with sex trafficking and racketeering conspiracy.

Which is one way to resolve a driveway dispute.

Psychologist and financial therapist Maggie Baker suggests that wealthy people “get into private wars” out of “a kind of a materialistic tribalism.”

Could renovation be a subconscious attempt to rebuild one’s life and create the “happy home” one longed for as a child?

“A lot of these people have a hollow sense of self,” Baker said. “They can’t sustain their identity without all these props.” She recalled a couple whose children had grown. “The couple asked themselves, ‘Why do we need a house with 14 bathrooms?’” But after sales kept mysteriously falling through, Baker suspected the couple “didn’t want to leave the house with 14 bathrooms. It was their kingdom.”

Such insight might help explain recalcitrant Beekman Place feces flinger Billy Rupp, who got a new neighbor in 2003 when Steven Campus bought the Boyds’ Paul Rudolph house for $6.3 million. You may not be astounded to learn that relations between the two quickly soured.

Initially, Rupp said Campus’s workers could use his roof to refurbish the exterior of the Rudolph house — but when they showed up, Campus sicced that same German shepherd on them. Rupp then began to extend his infamous spite wall. Going to court, Campus demanded that Rupp tear down his icy echo of Cold War Berlin. A yearslong legal siege ended with a judge allowing Rupp to keep his battlement, which now reached 27 feet and effectively blocked his neighbor’s penthouse windows.

And then in 2007, Rupp died at the age of 74 after falling in the townhouse he had so belligerently fortified. Financier Peter Novello bought the house for $10.6 million, promptly dismantling the wall and removing that giant “R” from the front gate.

Why was Rupp so ornery?

“Why did Trump say he won the election?” shrugged Campus, a onetime acquaintance of the 45th president. “People form a belief. It’s all about power.”

As things turned out, Campus and his new neighbor Novello became great friends.

“We’d have drinks every Tuesday,” he said. Which shows that even the most spiteful renovation drama can have a happy final act.